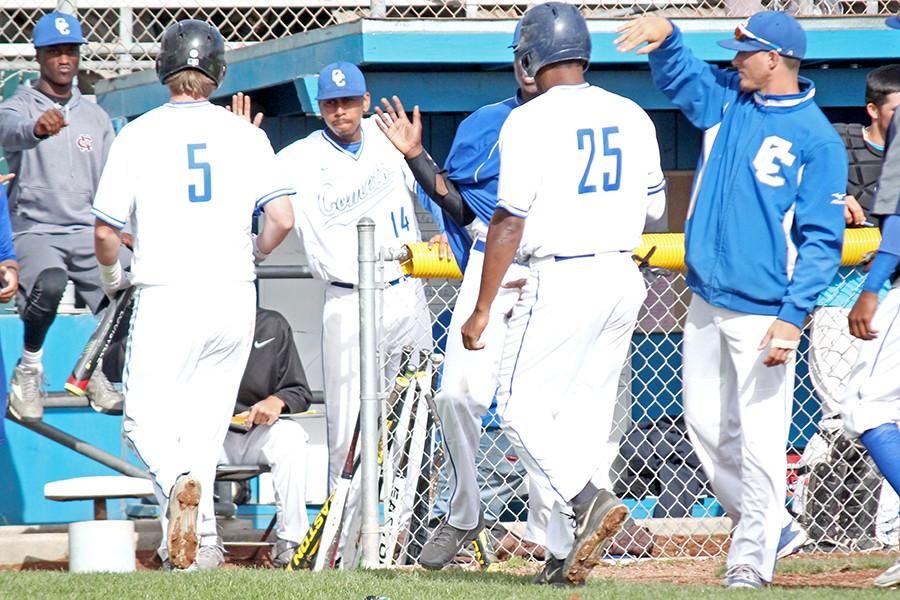 The Comets came out swinging early against City College of San Francisco to eventually win 11-1 at Comet Stadium on Thursday.

This win for the Comets was critical as they snapped out of a four-game losing slump before they take on rivals Diablo Valley College (6-3 overall) Thursday in Pleasant Hill at 2 p.m.

“Today we played well as a unit. Everybody won and played their parts today,” baseball coach Brian Guinn said. “We got guys on base, and moved guys over (into scoring position) and played good on defense.”

In the bottom of the first the Comets jumped out ahead by scoring three runs to start off the game. The Comet shortstop Jamal Rutledge’s single was followed by first baseman Allen Ressler’s walk. The subsequent hitters brought these runners to home plate to put the Comets in the lead 3-0.

It wasn’t just the Comet offense that won them the game, but their heads-up plays on defense that prevented San Francisco (0-9 overall) from scoring.

In the top of the second inning the Rams second baseman Isaq Lewis hit a pop fly to right field for the second out. The Ram runner on third, Abe Villafana, tagged up and darted home in an attempt to score.

When Comet right fielder Eric Whitfield caught the ball, he didn’t hesitate before heaving it all the way from the outfield to the catcher. The throw only bounced once while on its way to the plate to bypass the cutoff man.

It was a spectacular throw to earn a double play and get out of the inning.

“When I made that throw the wind was blowing out against me, but I called for it,” Whitfield said. “We don’t get to make a lot of huge plays, but when we do it’s really exciting to help the team out.

“I knew that if the ball came my way I’d have a shot to throw him out at the plate,” he said. “It’s also a real confidence booster to know you have someone who can scoop it up, and apply the tag.”

In the bottom of the third, the Comets kept chipping away at San Francisco pitches.

Comet catcher Lawrence Duncan singled and then he stole second base. Then, center fielder Evan Ray stepped to the plate and hit an absolute bomb that went about 360 feet to left field — over the high fence.

It was Ray’s second home run in the past two games.

“It was a fat pitch and I just hit it hard. It was a fastball ­­­— a little high — but I put a little extra ‘oomph’ into it,” Ray said. “They call me ‘Trout’, in reference to Mike Trout who plays for the Anaheim Angels, because we have a lot of similarities.

“We’re about the same age, we’re both fast runners, we have about the same build. We’re both outfielders, and we can both hit the ball far because we have power — so they just decided to call me Trout.”

The bottom of the fourth inning would be the Comets’ most productive offensive inning of the game. Comet second baseman Jon Quintal started it off with a single, and soon was pushed to third base by hits from left fielder Rabonnie Carter and Rutledge to load the bases.

Ressler then knocked in Quintal with an RBI to keep the bases loaded.

“We came through with hits with runners in scoring position,” Guinn said. “We had a couple of key hits when it counted.”

The home team went on to get four runs off three hits in that inning to make the score 9-0.

The Comets had scoreless fifth, sixth and seventh innings but tacked on two insurance runs in the bottom of the eighth on a double by Whitfield (two doubles, 2-4 and four RBIs).

“I’ve been working on my batting with coach Guinn,” he said. “And working on keeping my hands back, being patient and developing an approach against college teams.”