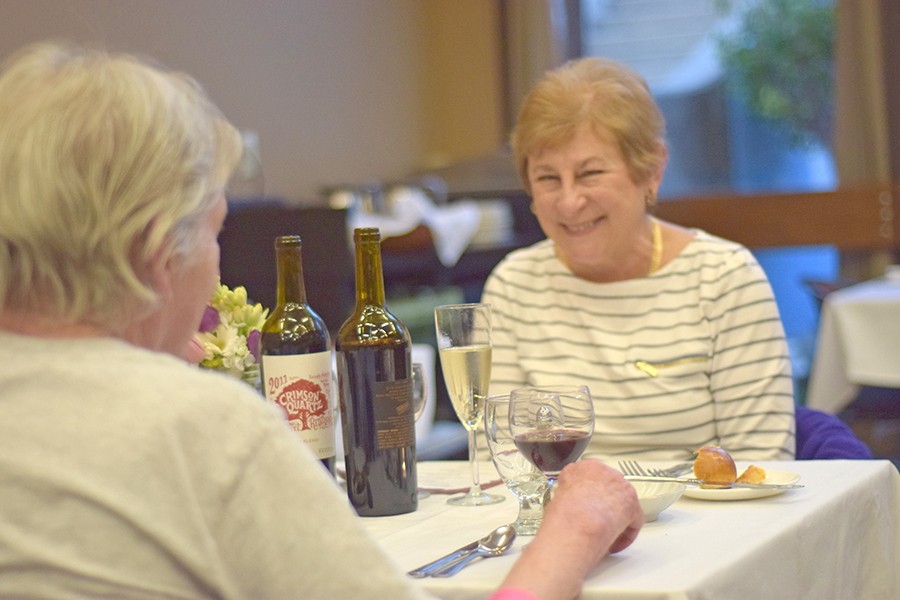 Romance filled the air as guests enjoyed each other’s company while basking in the glow of a candlelit Valentine’s dinner prepared by students.

The culinary arts department hosted its second annual Cupid’s Season Dinner on Feb. 11 at the Three Seasons Restaurant from 5 to 8 p.m.

Attendees got a chance to celebrate Valentine’s Day in a romantic ambiance created by music, candlelight’s, champagne and a five-course meal prepared by culinary art students.

Culinary arts instructional assistant Angel Chau said an estimate of $1,200 was generated from the event.

Students in the program were given the opportunity to show off their cooking and teamwork skills by completing orders quickly,  culinary arts student Tatiana Abrer said.

Culinary arts major Kevin Cornejo said this event was not only a chance to celebrate Valentine’s Day together, but also a chance to build self-confidence, experience and improve time management skills while working in the kitchen.

Cornejo, who oversaw preparation of the short ribs, garlic mashed potatoes and carrots, learned what it took to put together a full-course meal.

“As soon as you see the menu you need to know cook times, what to prepare first,” he said. “You have to make sure you go in to it with a plan, have your timing down and take things step by step. It helped me understand how to work better in groups and how to delegate tasks that best fit an individuals skill set.”

Attendee Lorraine Dirmetkr said despite the price she had to pay for Cupid’s Season Dinner, it was well worth it.

“At first, when I saw the food coming out I thought it wasn’t going to be enough. The food just kept coming. It ended up being enough to make me full,” Dirmetkr said.

Attendee Elena Brattone said she was also surprised with how much food the $30 ticket provides.

“It felt like French cuisine,” Brattone said. “They usually give you really small portions but at the end I was stuffed too.”

Dirmetkr said her grandson, culinary arts major Joseph Ramirez, was the one who told her about the event.

Overall she said she was satisfied.

“Everything was great. (The food) was delicious and well presented,” Dirmetkr said. “I would gladly come back again.”

“We learned what do and what not to do for this year’s event,” she said.

Culinary arts student Lauren Patrick said, “We made the house fettuccine the day of and we did do some of the prep work the day before but we have been planning since last semester. We had to make sure the DJ was available for the date, find the linen, flowers and other decorations.”

After guest finished their dinners they were given the chance to get a Valentine’s Day picture taken for $5 by fine and media arts professor Dana Davis.

Culinary arts student Jose Ramirez, one of the cashiers of the night, was also offering the guests heart-shaped cookies for $1.

The money collected for the event is to raise funds for the culinary arts department, culinary arts assistant professor Elizabeth Schwarz said.

“We want to support our students with scholarship opportunities and unique experiences for them,” she said.

Davis said it was challenging to get the attendees to take a picture. Ramirez also said it was hard getting them to buy cookies.

“Maybe next time we should include a picture and a cookie with their dinner,” Ramirez said.