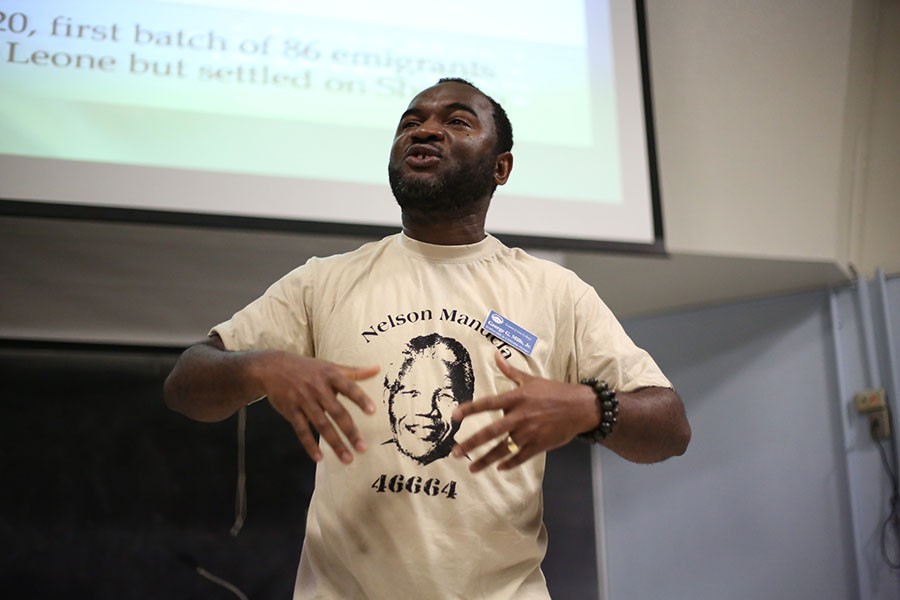 EOPS, CARE and CalWORKs Program Manger George Mills vibrantly explains the legacy of Liberia in LA-100 during the "Out of Slavery" event on Saturday.

The history behind Africa’s first independent nation, its accomplishments and complexities were brought forth during the Black History Month event, “Out of Slavery: How free African-American slaves formed a new nation,” in LA-100 on Thursday.

George Mills, EOPS/CARE and CalWORKs program manager, led the two-hour event in which he explained the history of Liberia, the continent’s first country formed by freed slaves.

But not only did Mills talk about Liberia and its cultural and historical relevance to the U.S. today, but also passionately described the importance of having a strong work ethic, that he derived from his home country of Liberia, particularly for African-American populations.

“There’s a tendency to associate black people with laziness, (but) we come from a legacy that (established Liberia),” he said.

“To me, if you didn’t recognize (the work ethic) now I get excited because I get to tell you and you and you and everyone in this room that we come from a legacy that works and work that produces goods.”

“This is who we are. We are a people who do work,” Mills said.

Mills said how the motto for Liberia, “the love of liberty brought us here,” reflects the profound importance of freedom for Liberians in the past, and the love of freedom especially when comparing its history to the history of the U.S., during and after slavery.

“So there is much more to who we are if we open up ourselves up to this possibility.

“I love the history of the world. I love American history, Liberian history and every history because it allows me to be a fuller person,” Mills said.

“I am passionate about work because I am not lazy. You are not lazy. You come from a legacy of strong powerful people. I bring work right now. I’m hoping that you bring work too and that together we can share the dignity in our work and we can support each other.

“This is how CCC gets better. We do our part, and you do your part,” he also said.

African-American studies major Jay Lamar said this event strengthened the black community from within and that the whole time, much of what Mills was saying resonated with him.

“I was agreeing with what he was saying. The whole vibe I felt was extremely important. It was an (informative) history lesson. We’re not people that are lazy and for me that stuck to heart,” Lamar said.

Student Life Coordinator Erika Greene said for the past 20 years there tends to be events held in the Knox Center celebrating and honoring Black History Month, but due to stage rigging retrofits currently underway, such a performance was not feasible.

“We changed up any plans completely but (thankfully) George was available and came to us and we were able to plan a time for the presentation,” Greene said.

Mills said the event was last minute and advertising was limited to that very week.

“I would’ve loved to advertise it more, but we couldn’t due to the time (allotted),” Mills said.

Greene also said, “Africans have made a lot of contributions, black history is American history and everyone has benefited from, we have to have all people recognized and to know that we have a place in history, everyone has value.”

Mills said, “There is so much more to African history than what you read so far.

“This is my way of showing you that you are much more than any statistic will ever tell you.”

Mills concluded with questions from students concerning Liberia and his personal family history.