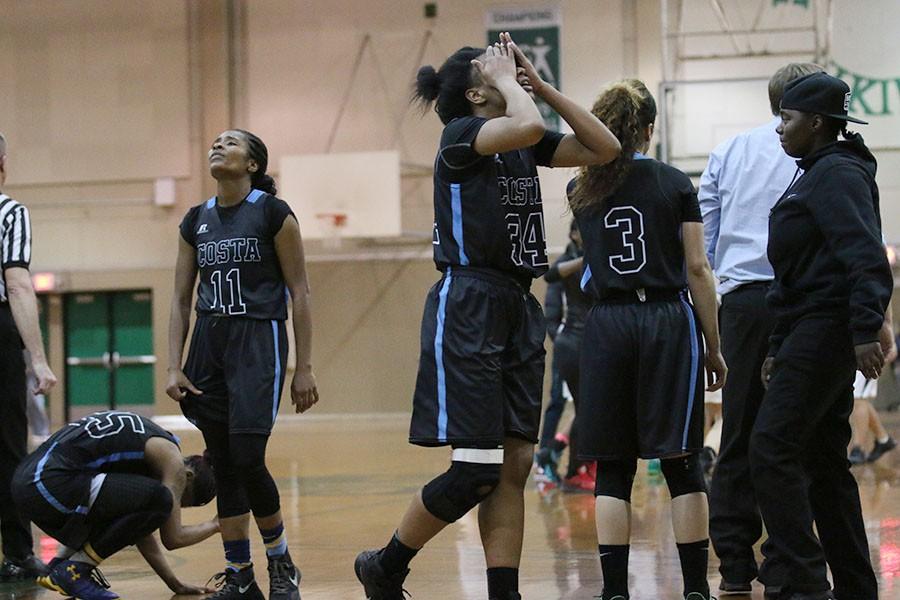 Comet players Daizah Pounds (left-right), Briah Davis and Sydney Vidal, exasperated, come to realization that their season has come to a an end after a classic overtime playoff battle Friday at DVC.

PLEASANT HILL — In an historical matchup, the women’s basketball team endured a heartbreaking 82-80 loss in overtime to Diablo Valley College (21-9 overall, (9-5 in the Big 8  Conference) after forcing overtime in the 2nd Round of the NorCal Regional Playoffs here on Friday.

“You have got to give it to (the Comets) creed,” Vikings coach Ramaundo Vaughn said. “A team is a personal reflection of its coach. Paul (DeBolt) is a warrior. He has a group of warriors next to him who fought tooth and nail until the end.”

Contra Costa College defeated DVC 78-67 in the College of San Mateo tournament Dec. 18 and this was the first time these two Contra Costa Community College District teams ever met in a postseason game.

Friday’s match was a classic, with multiple lead changes throughout the game.

In the final seconds of the fourth quarter, DVC had a two-possession lead over the Comets, so coach Paul DeBolt ordered his players to intentionally foul the Viking players to get quick possessions.

With CCC trailing 76-72, Comet forward Julian Robinson cut the deficit to one point with a clutch 3-pointer with 9.4 seconds left. Then Robinson was whistled for a foul on Viking guard Raeona Ford right when DVC inbounded the ball, fouling out of the game.

Ford converted one of the two free throw attempts giving the 4th seeded Vikings a 77-75 lead and the Comets a chance to tie the game with 8 seconds left.

Then point guard Tynisha Adams pushed the ball up court and hit CCC center Briah Davis who made a deep 2-pointer to tie the game at 77-77 sending it into overtime.

“It tied the game so we were ecstatic,” DeBolt said. “To be in a spot to score and get a stop at the other end and then score again in the last 13 seconds to force an overtime was amazing.”

DeBolt said the play on Robinson’s 3-pointer was a designed inbounds play, but he gives credit to Adams for making a nice read to get the ball to an open Davis for the tying score.

The 13th seeded Comets (21-10 overall, 11-1 in the Bay Valley Conference) started the game solid on defense, but could not find any offensive rhythm on the other end.

Forcing 12 turnovers and outrebounding DVC 45-42 put the Vikings on their heels defensively. However, it was Viking guard Ford’s second half performance that kept DVC in the game as she connected on four 3-pointers in the second half.

Comet sophomore guard Sydney Vidal said Ford’s success was disappointing to the team because she was 19 percent from the 3-point line coming into this game.

“Absolutely, I feel like (DVC) had one of their best 3-point shooting games of the season,” sophomore guard Daizah Pounds said. “We’ve been letting teams shoot 3s on us all season and it finally caught up with us in this game.”

The Comets were up 23-19 in the second period, but DVC started to capitalize on CCC’s missed shots and turnovers to gain a 24-23 lead.

The Vikings failed to hold onto its three-point lead when Adams drained her first 3-pointer of the game to knot the score at 28-28.

At the end of the first half DVC led 33-30. Each team blew opportunities to extend their leads as both teams struggled to make shots.

After a DVC timeout, with 6:54 left in the fourth quarter, the Comets were down 57-55. CCC went on 9-0 run with CCC forward Robinson (13 points, eight rebounds) converting a 3-point play.

However, CCC’s offense stalled and DVC made a comeback with Ford and Viking guard Cecila Cueno sinking back-to-back 3-pointers bringing the game to 68-68 with 1:50 left in the fourth quarter.

“We were ahead 64-57 with less than five minutes left in the game,” DeBolt said. “(DVC) hit four straight 3s on us and that was ultimately the turning point of the game.”

In the overtime the Comets failed to score a field goal. They were only able to connect on three free throws.

The Comets came up short in overtime losing a heartbreaking game 82-80. For the whole game the Vikings protected the paint and made it hard for CCC to score from the inside.

Pounds said DVC covered the paint well and they used their hands to block driving lanes.

“They were making it hard for us to score inside,” DeBolt said. “It was one of those games we knew we had to work to get the ball inside.”