Men’s team wins to advance into third round 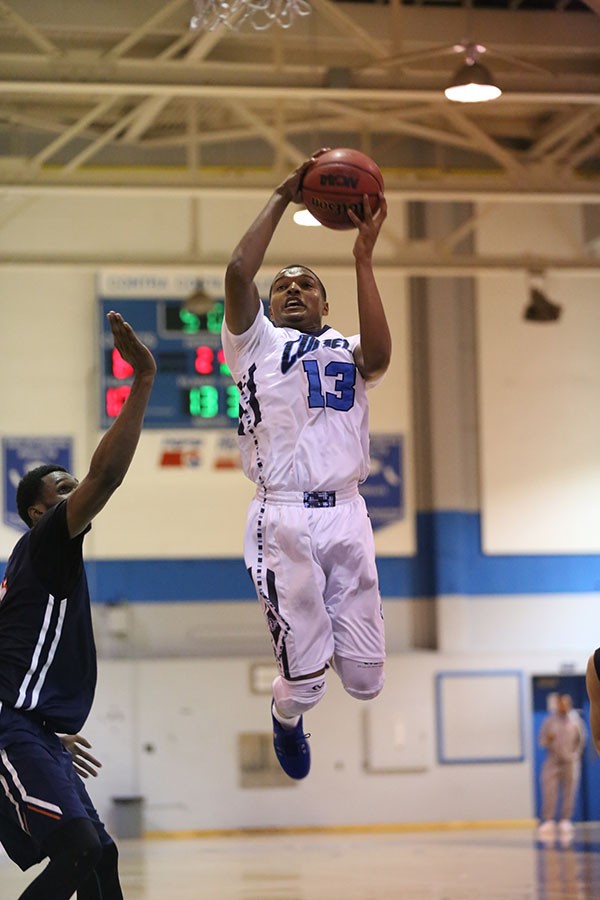 Comet guard Anthony Sullen flies past Hawkeye center Bakari Bradford for a layup during the round 2 Mens Basketball Regional Championship victory against Consummes River College on Friday in the Gymnasium.

After winning the Bay Valley Conference championship and receiving a No. 7 seed in the California Community College NorCal Regional playoff bracket, the Comets defeated No.10 Cosumnes River College 86-77 in second round playoff action Friday in the Gymnasium.

The Com- ets trailed Cosumnes River early but rallied to win their first home playoff game since 1990 on the back of All-State forward and  BVC MVP Larry Wickett.

His 25 points and 12 rebounds paced the Comets through the first half and his array of powerful dunks kept the crowd entertained throughout the second.

CCC continues its playoff run, taking its act on the road to face No. 2 Feather River College today at 7 p.m. in Quincy.

The Hawk-eyes are a familiar foe to this CCC squad. The two teams met Dec. 30 in a match up that saw the Comets escape with a 60-57 win.

“They had the same starters that they had when we beat them in the Chabot Tournament earlier this season,” coach Miguel Johnson said. “Missing a few players may have limited some of what they like to do, but I don’t want to take anything away from our guys.”

Cosumnes struck first Friday night, hitting its first 3-pointer followed by a lay up through the heart of the Comet defense.

Sophomore point guard Bobby Syvanthong (10 points and two assists) controlled the tempo for CCC. He forced the Hawkeyes to play at the Comets pace whenever it seemed Cosumnes was on the verge of a run.

Falling behind 5-4 in the opening minutes, the Comets turned their attention to the glass where Deonte Smith (seven points and nine rebounds) along with Wickett got CCC second chance opportunities, chances the Comets turned into a 10-5 advantage.

Guard play led the offensive for Cosumnes. However, each time an advantage was ripe to be seized, Comet freshman Jeremiah Alston (seven points and five rebounds) or the instant offense of Anthony Sullen (20 points and four rebounds) hit a big shot to stifle any Hawkeye momentum.

“It was a good first playoff game. I hope we can keep it going. Everything was to the rack, the lanes were open and I finished at the basket,” Sullen said. “With only eight players their guards had to sag off or risk foul trouble and we took advantage of that.”

As the first half drew to a close, Alston began to heat up shooting the Comets to a 29-17 advantage. Cosumnes found the path to prosperity when Alston and Smith both earned their third foul in the first half.

Cosumnes’ guards cut the Comet lead to 31-26 with under five minutes remaining.

CCC continued to force Hawkeye players into bad decisions and with 3:28 left before halftime, Comet guard Dwight Wilson (eight points and two assists) hit a 3-pointer to give CCC the nine-point advantage that it would take into the break.

“For a team without much playoff experience we handled the game pretty well,” Comet freshman Jalen Dominique said. “We stuck to the game plan and played with energy and without inner turmoil for 40 minutes. Now we just have to carry it over to the next game.”

The Comets blazed out of the locker room after halftime, as Syvanthong continued to assault the rim and converted a pair of lay-ups coupled with a Sullen 3- pointer to boost CCC’s lead to 16.

Although the Hawkeyes kept the game within reach in the second half, for the Comets, acrobatic dunks kept its opponent’s morale down, and the crowd on the edge of its seats anticipating the next highlight.

Back-to-back dunks by Wickett and Sullen midway through the second half clipped the Hawkeye wings draining the squad of its fight. It cemented the fact that the Comet athleticism was going to be more than the undermanned squad would be able to repel.

With four minutes remaining, the Comets completed three sets that exemplify its play this season.

A slashing layup by Sullen followed by a Deonte Smith block on defense ignited a Comet fast break. The possession resulted in a Wickett 3-point play that put CCC up 72-57 and cemented the reality that there was no comeback in Cosumnes’ future.