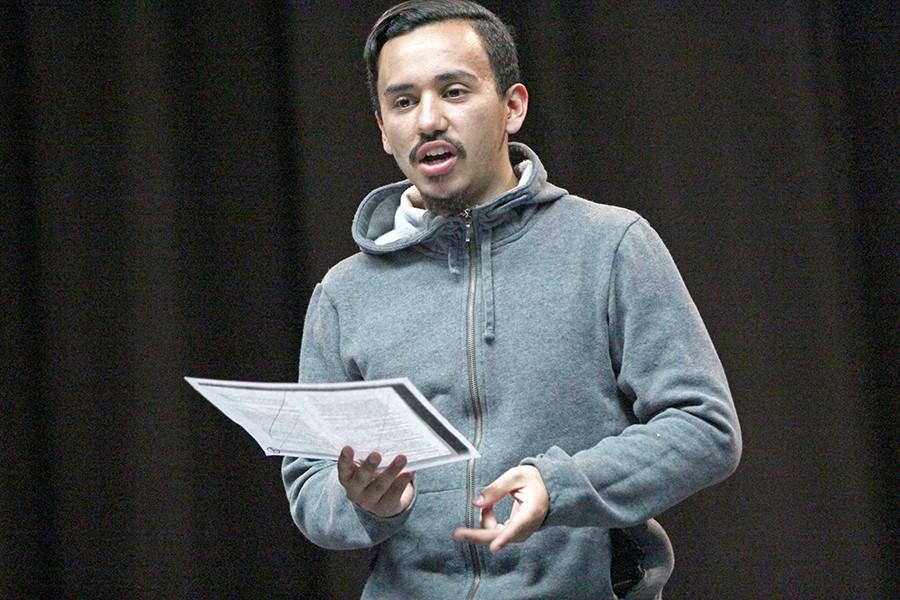 Drama major Oz Herrera-Sobal has shown his passion for acting by performing in multiple plays on campus since 2014. Herrera-Sobal is an avid cyclist and bikes whenever possible.

From an actor’s perspective, people learn every skill by acting them out.

As a lifelong entertainer, motivated by the desire to make his biggest supporter proud, theater major Oz Herrera-Sobal, 20, has played roles in four productions in a span of two years since enrolling at Contra Costa College.

“My mother has supported me in everything I do,” Herrera-Sobal said. “She is so proud of me and loves seeing me perform and I love bringing a smile to her face.”

He said his parents brought him from Puebla, Mexico to the Bay Area as a one-year-old in 1996, and since then he has performed in his K-12 school plays and written poems.

He graduated from Gateway High School in San Francisco in 2014.

Herrera-Sobal said he decided to come to CCC to continue his education and act.

Being in the spotlight is not anything new for him. During his childhood he was in some Target advertisements.

Drama professor Angelina LaBarre has been Herrera-Sobal’s mentor since meeting him in the fall of 2014.

They share a bond that allows them to collaborate on projects. She said she always keeps an open mind to any suggestions Herrera-Sobal has.

In a way, Herrera-Sobal’s passion for acting adds fuel to LaBarre’s drive as she sees a young, aspiring actor.  She said she has encouraged him to network with other theater students and professional actors to help him in his career goal.

“The thing about working with young actors — especially young actors who are as driven as Oz is — is that it infuses you with the same drive,” LaBarre said. “I want him to succeed in his work, and so I am driven to give him all the insight and tools that I am able to, including pointing him in the direction of other people who have different training or specializations that can benefit him.”

“It’s pretty fun working with him,” he said. “(Herrera-Sobal) gets serious when he’s acting, but makes time to joke around during breaks.”

Other than acting on stage, he is also a cyclist who is sponsored by Rich City Rides, a nonprofit organization that provides community members with bicycle repair and maintenance for their bikes. He does at least four bike marathon races a year. While he has passion for both hobbies, Herrera-Sobal said he would choose performing in a play over a race any day.

“Biking is a huge part of his life. He fixes bikes on the side, does marathons and he is sponsored by (Rich City Rides team),” Espinoza said.

One of Rich City Rides’ missions is to provide people in the community who cannot afford transportation a bike to improve their health and a reliable means of transportation.

Najari Smith, the co-founder of Rich City Rides calls Herrera-Sobal “that dude” for what he’s done for his organization and community.

“(Herrera-Sobal) has a great personality. He’s very chill and easy to talk to and him being an actor is pretty helpful,” Smith said. “My first encounter with him was when I saw him ride at a one of our social rides — and he was fast.”

After the ride Smith said it was a “no-brainer” to bring him onto the Rich City Ride cycling team.

Before endorsing him, Smith said he would see Herrera-Sobal at many other bike events but never mentioned it to him.

“I sponsored him because he rides his bike a lot,” Smith said. “Having somebody who’s really about the ‘bike life’ and him knowing a lot of people is a really good quality in a person — and it is a plus that he’s really fast.”

Herrera-Sobal has a dream of being able to land an acting job and to meet Jim Carrey. He said Carrey is one of his favorite actors, but he also admires the late Robin Williams.

“My favorite actors are Jim Carrey and Robin Williams. I was devastated when I heard about Robin Williams’ (death). One of my bucket list entries was to work with him or meet him.”

Acting and being a cyclist are a huge part of Herrera-Sobal’s life, but any other day he is hanging with friends or working part-time as a bike messenger.

Sobal’s passion for acting, racing and entertaining others continues to influence everyone around him.