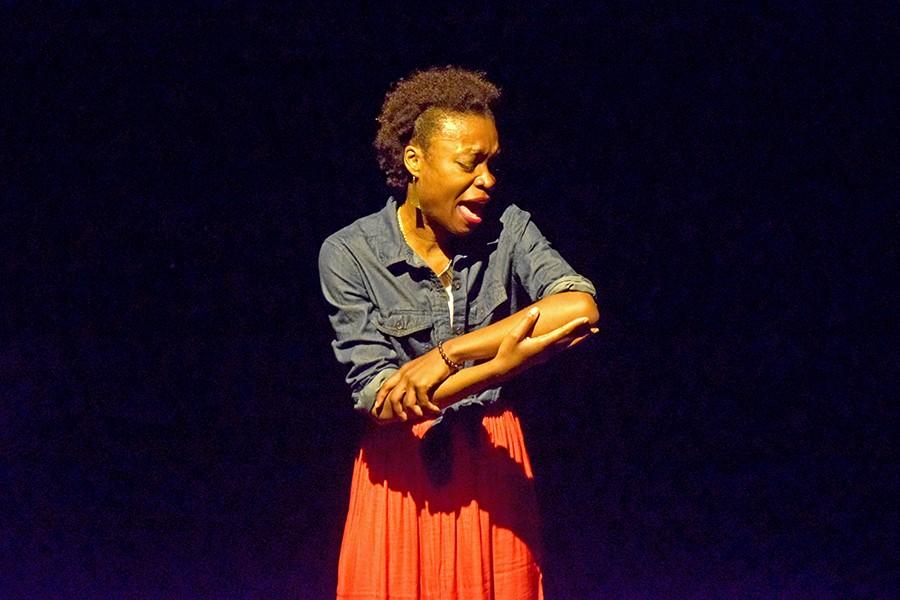 Performer Echo Brown, shifts into her final scene with a climatic flow of movements in her original one -person play, “Black Virgins Are Not For Hipsters,” on March 1 in the Knox Center.

I am a 23-year-old virgin living in New York and it’s not natural,” performer Echo Brown says in the opening scene of her one-women show, “Black Virgins Are Not For Hipsters,” held at the Knox Center on March 1.

Brown, the performer and writer of the play, riled up Contra Costa College students and faculty and people from the community through her acting performance, touching on issues of gender, race and social class.

“The play had a great turnout,” Social and Applied Sciences (NSAS) Division Dean Ghada Al-Masri said.  “It is really a piece of art that allowed you to reflect on your own life, upbringing, and experiences that shape who you are.”

The play depicts Brown’s predicament in struggling to keep her virginity while falling in love with a white hipster she met on Craiglist.

Throughout the play, Brown takes the audience into her childhood, discusses her struggles as a black woman and how it has changed her view about loving men who share her same color.

“I have always wanted a black man to love me — to stroke this black hair,” she said, referring to how many of the African-American men she knew in her childhood favored black girls with light skin or European features. “But not even my own kind wants me.”

“Everything she talked about I either lived in some way or could deeply relate to,” Evans said. “I think being black and female it is not often I get to see my life, culture or even gender struggles reflected in entertainment in a way that is totally relatable.”

At the opening scene, Brown explained how she had always sought to change the world and become an activist to fix the stereotypical system in America.

“But I realized there is no world of activism with social justice,” she said. “This is a world where money matters.”

Brown rocked the stage dressed in white tights, a long pink shirt open at both ends, and her short hair in ringlets as she prepared to go on a date with her white hipster boyfriend, whom her mother warns her about.

She says her mother constantly cautioned her from getting into a relationship with men, as they are not trustful and “are only after one thing.”

But despite her mother’s warnings Brown is unable to suppress her desire, which only seems to grow each time she meets up with Ryan. In the final scenes she breaks free from her mother’s man-hating advice and makes love with him.

Blue lights illuminated her body, as she twirled and swayed her arms in the air at the dark stage, expressing the sexual urge she’s been locking up all her life.

Even though the play is a solo performance, Brown is able to take on the roles of different characters in the play by emulating the voices of her mother, her hipster boyfriend and her brother.

“The actress was great,” Library department Chairperson Andrew Kuo said. “She emitted different voices and engaged the audience with her (variety of) dances.”

To stir up the audience, Brown brought liveliness to the stage by performing dances to Beyonce songs and encouraging the audience to dance along with her. “The dance floor was the only place where stereotypes didn’t matter,” she said.

The theatrical lighting illuminated the stage, constantly flashing on and off and sometimes faintly dimmed to convey the mood of the scene.