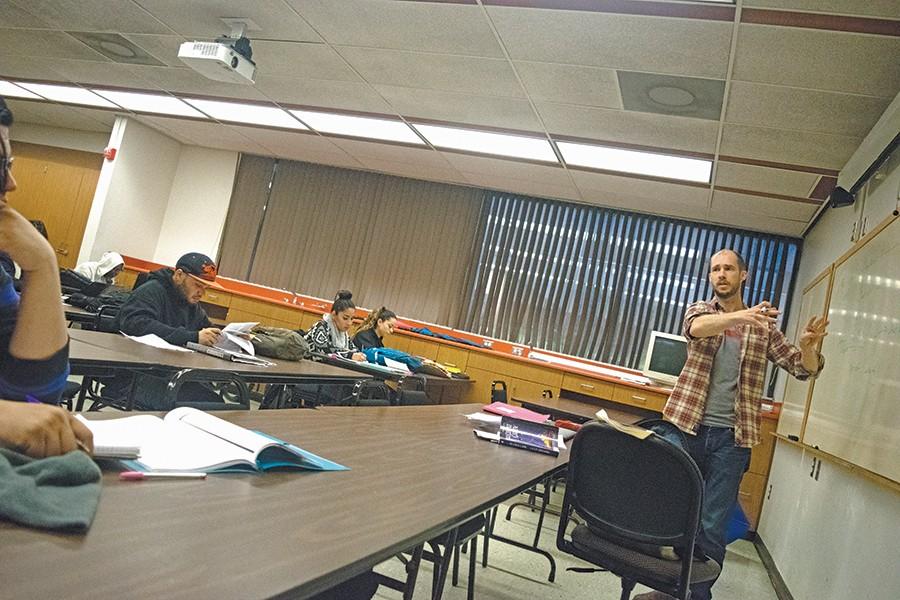 English professor Benjamin Jahn speaks to his class, American Literature: 19th Century, on Thursday. Class members are taught to share their ideas freely and to expand their own knowledge.

An ongoing class this semester is designed to teach students about ethnic and cultural diversity in literature in the U.S. through books, essays and poems shape.

The American Literature: 19th Century course is taught by English professor Benjamin Jahn on Thursdays from 2:10 to 5:30 p.m.

Jahn said he wants to show that American literature has become a “richer” tradition than what it was in the 1870s and 1890s.

Students analyze an assortment of selected texts that are chosen depending on their relevance to the course during student-led discussions.

Liberal arts major Christen Hernandez said, “I think it’s really cool to listen to the different ways my classmates hear and interpret different parts of literature. No longer are you being taught ideas but you are encouraged to come up with some of your own.”

She said Jahn gives them an angle that is provocative and leads to them to view the text differently.

“At a certain point of your education, you get to a place where you are no longer there to be walked through ideas. You know enough, or think you do, that you are be able to be a part of the process,” she said.

Jahn creates an environment in which students are taught to share their ideas freely and to expand their own knowledge.

Jahn said he is more interested in fresh ideas than the topics that have already been thought of.

“I don’t care that Gatsby represents the American dream. I want them to know that Daisy represents women’s oppression,” Jahn said. “I want (students) to lead the class. I want to show them that one person’s voice is strong.”

Jahn is teaching the class for the first time while English professor Joy Eichner-Lynch is on sabbatical.

When Eichner-Lynch was hired she said the literature program was “dead” and developed the ENGL-220B class because the one in place was “old fashioned” and needed some renovations and adjusted to qualify as transferable.

Now, the 3-unit class meets the CSU general education requirements and the IGETC requirements for the humanities category.

Although the class has come a long way since its cancellation due to low enrollment in the past, it is only offered during the spring semester.

In the past, having low enrollment has prevented the course from happening every semester, but the continuous advertisements through fliers and word of mouth has kept enough seats filled for the class to continue.

The classes were previously taught six Saturdays throughout the semester and 18 to 40 students were enrolled, Eichner-Lynch said.

“Classes are more fitting to students’ schedules now,” she said.

English major Magali Mercado said she knew about the class because of the fliers and through her teachers.

Eichner-Lynch said even if English is not the student’s major, they can still learn something in the class.

Mercado said, through student-led discussions, students learn how to read and dissect stories and poems. She said she encourages ESL students to take the class because literature is a way into a culture.

The class is not focused on composition. Those students worried about the writing part can still gain something by taking the American Literature class.

Regardless of what background students come from, or whether they are English majors, literature allows for everyone to bring their own perspective, she said.

Jahn said he tells his students that it is OK to not understand the material.

“You don’t need to pretend that you understand. You can say you don’t. It opens another degree to the discussion,” he said.

Other forms of communication to students will be from counselors advising English majors to take the literature classes, Eichner-Lynch said.

Eichner-Lynch will return during fall to teach the American Literature course.