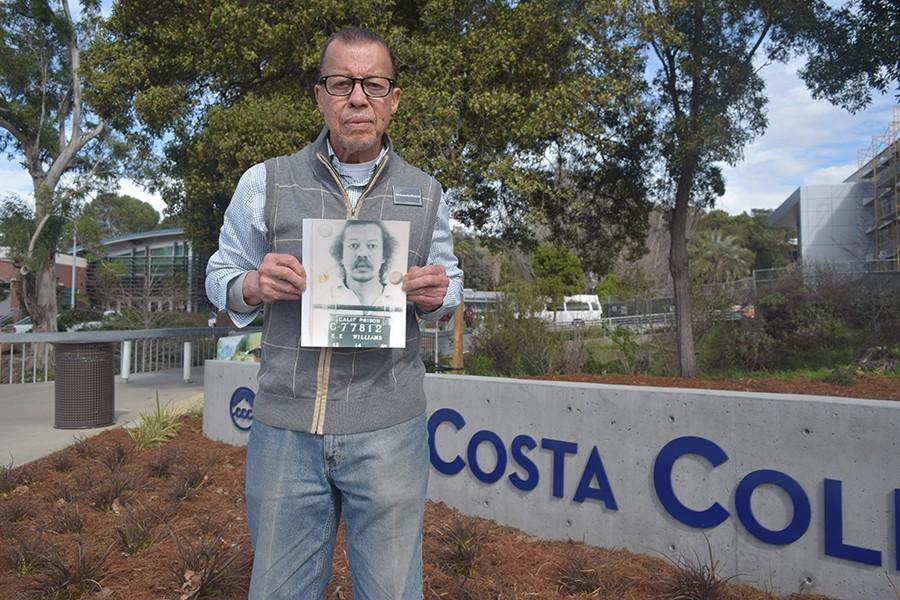 Edward Williams holds his mug shot from 1983 taken at California State Prison in Vacaville. Williams is attending CCC to gain a counseling certificate to counsel youth who are currently on a path to the prison system.

A group in their mid-30s forms a circle in LA-103 as they prepare to witness 74-year-old Edward Williams’ ability to counsel a room full of teenagers.

In a moment’s notice the room transforms from one filled with older people into a space filled with young, care-free, arrogant teenagers from a poor local high school.

Williams’ job is to act as the facilitator.

He is a co-facilitator of a progressive discussion about issues that underlie school bullying with the youth who suffer from being bullied, participate in the act or have seen bullying.

As Williams, a health and human services major at Contra Costa College, takes control of the noisy room with his firm voice, he starts explaining what will be discussed and the limits of confidentiality. As the exercise continues, the room becomes rowdy, impatient and intolerant to the things Williams and his co-facilitator say.

As the students in the room began to disengage, Williams maintains his composure and continues. He patiently sits and listens closely to what is being said, by whom, and in what way.

At the end of the exercise Williams tells the students that they should be soft spoken or silent until the person is ready to have a conversation.

“Today’s young people from the hood have developed a mental abnormality,” Williams said.

He knows troubled youth. Williams said he served 30 years inside the California State Prison in Vacaville where he encountered many young people. Most of them were gang members.

“He is the smartest man I know,” Arner Pitts, an ex-Los Angeles crip gang member who was mentored by Williams, said. Pitts said that at first he was proud to be locked up in prison because he felt as though he had “graduated into the big leagues.”

Pitts said when Williams asked him his name he replied confidently with his street name, “Spook.” Williams frowned, and asked him if he knew his father and with a yes response from Pitts, Williams requested that Pitts ask his father what the Spook Hunters were.

He found out that his street name was a derogative term coined by the Spook Hunters, a white racist youth gang that directed violence toward the growing Los Angeles black community in the 1940s and 50s.

Pitts said, “Teach (Williams) took his time to mentor me and mentored me until the day I paroled.”

He said Williams made him read three newspapers a day, study black ancient history up to current history, taught him philosophy and made him into a studious young man. People even started calling him Young Malcolm.

Pitts said Williams changed his mentality from an angry gang member to an educated, sophisticated young man who was ready to be a valuable part of his community.

Pitts said Williams was the source of his evolution as a man.

After parole, Pitts enrolled at Cerritos College in Norwalk, transferred to Cal Poly-Pomona and went on to get his business degree in finance and, eventually, a law degree.

CCC professor of health and human services Aminta Mickles said Williams offers support to anyone, if he can.

During his time away from the college, he participates in the community. He is a member of organizations like the Men and Women of Valor and the Reentry Success Center that help the Richmond community progress.

Williams also speaks to a different group of recently released men every first Thursday of the month in the Veterans Hall in Richmond. Toward the end of his sessions Williams shows the men his mug shot from when he started his sentence.

Williams said, “After serving 30 years, I can see in their faces that they know I know how they feel.”

Pamela Saucer-Bilbio, CEO of Men and Women of Valor, said it is a tough field that Williams is going into but there is a need for someone to mentor youth.

Mickles said, “You’re only as sick as your secret, and Mr. Williams told us his. He is tenacious and is already envisioning.”

Williams said he is learning from the organizations he participates in and classes he is taking at CCC on how to successfully grow an organization. Williams was influenced by Mace Thomson to enroll in college after being released from prison. Williams returned for his third semester of college after suffering a heart attack last year. He was not able to attend classes in the fall of 2015.

Williams said something he has learned about youth today is that the ambition in most youth is not to gain knowledge and experience but to accomplish requirements that will gain them a degree.

Williams said that the materials that are in books and that are taught in school mean something.

He said he sees the young people in prisons and in the outside world.

“If we don’t make an effort, and I mean a real effort, to get their attention, our future is going to be jeopardized,” Williams said.