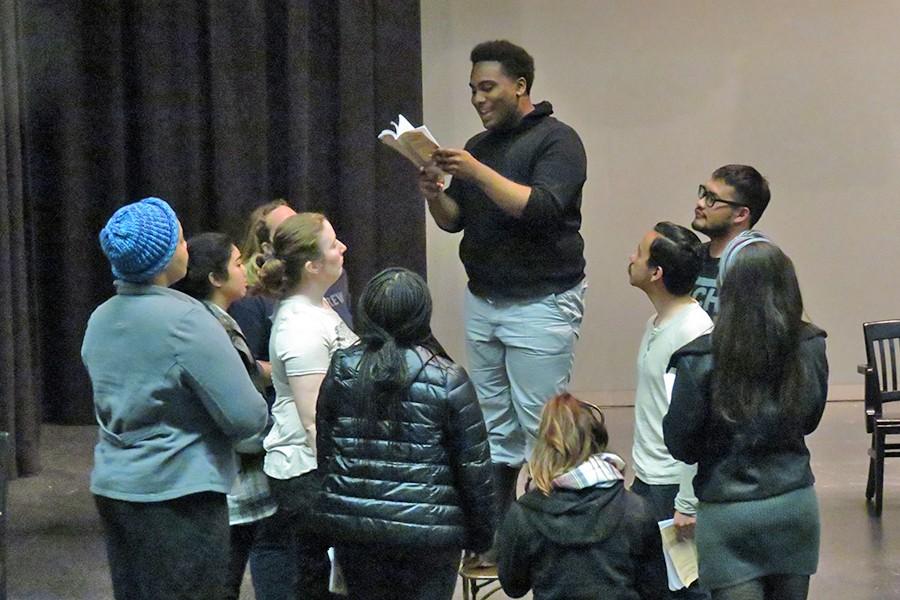 Drama major Armond Lee (center) reads to his fellow actors during a rehearsal of “The Laramie Project” in the Knox Center on Friday.

With the Knox Center’s old rigging system finally patched up this semester, the drama department will be premiering “The Laramie Project” and two fundraising events..

Drama professor Angelina LaBarre will direct “The Laramie Project,” written by dramatist Moisés Kaufman and members of the Tectonic.

“It is a very powerful drama, based on the murder of Matthew Shepard,” drama professor Kathryn McCarty said.

“The Laramie Project” depicts the brutal murder of a 21-year-old gay student on Oct. 6, 1998 at the University of Wyoming. The student was found unconscious and tied to a fence, severely beaten and robbed by Russell Henderson and Aaron McKinney.

After surviving a five-day coma, the student subsequently died and Henderson and McKinney were charged with first-degree murder.

“The play is mainly a documentary and (a series of) interviews collected about Matthew Shepard’s death,” drama department Chairperson Carlos-Manuel Chavarría said.

“The play touches on the important elements of why he was beaten and robbed and what led to his murder,” he said.

Students will get the opportunity to see the play in a new fashion, experiencing the innovative designs of the theater’s rigging system eliciting advanced drama effects and facilitating the actors’ performances.

It was eventually completed at the end of January.

“The project was created to fix an aging rigging system that was more than 30 years old and was installed during the construction of the Knox building itself,” Hiner said.

He said several of the batons — the pipes on which scenery, drapes and lighting instruments are hung — had been removed as they were deemed damaged and unsafe over the years.

The new system, which includes counterweights, line sets, arbors and batons, completely supplanted the college’s old system with an additional level of safety for students and the facility, he said.

It also serves for a  versatility of use.

“The project added several more batons,” he said. “This means that more scenery can be flown onto and off of the stage in a variety of ways not previously possible.”

Chavarría said before the construction of the new rigging system, scenery and backdrops for plays were executed by painting a flat set for the plays.

He said set design was poorly done, and some students even talked about how the college didn’t have the capability to produce advanced set designs. “Now we have a real set,” Chavarría said.

He said the Knox Center will still undergo vital renovations starting this semester, that will require “turning down parts of the theater” to replace it with an up-to-date one.

“It will be a big summer and they’ll probably be done by end of the (summer term),” he said.

McCarty said she will be directing “It’s My Line!”  premiering tonight at 7 p.m. in the Knox Center with a “$5 suggested donation.”

“It will be a night of improvisational comedy,” she said. “Improv is the creation of scenes without a script. It’s amazing to hear the audience laugh when you, the actor, are making theater on the spot.”

She said in the second fundraiser faculty and administrators will be performing in a play.

This includes herself, Chavarría, LaBarre, Liberal Arts Division Dean Jason Berner and drama professor Tara Blau. The date of this play has yet to be determined.