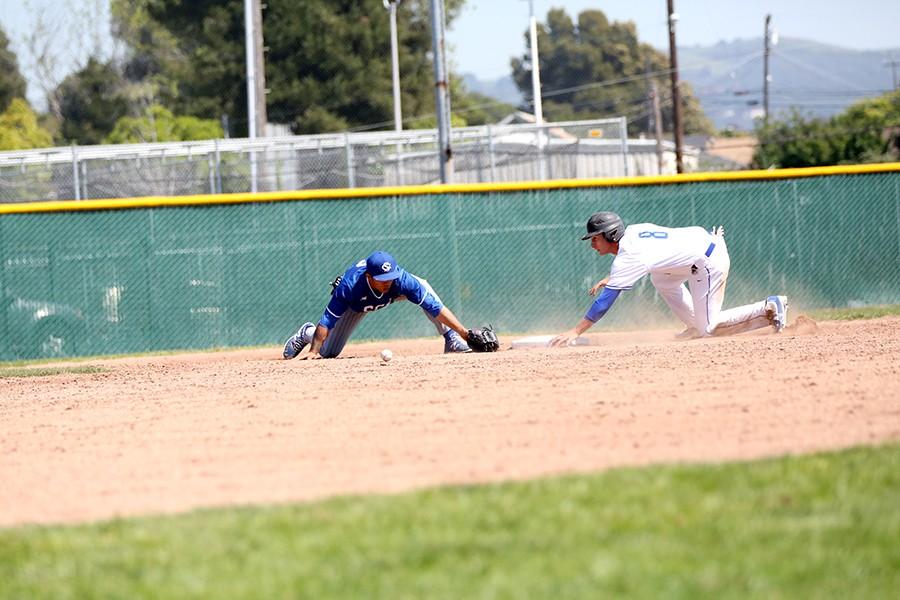 Comet first basemen Allen Ressler tags second base after an error by Falcon second baseman Tyler Thornly during CCC’s 6-5 win over Solano Community College at the Baseball Field on Saturday.

The Comets snuck a 6-5 win off the Baseball Field on Saturday against Solano Community College (9-15 overall, 6-7 in the Bay Valley Conference).

With this win, Contra Costa College (9-14 overall, 5-8 in the BVC) is on a two- game winning streak in conference while trying to make its way up to the .500 winning percentage mark in search of a playoff berth.

As of press time Tuesday, the Comets are one game behind the fifth place Falcons, but are still six games behind first place Laney College.

The Comets are scheduled to play second place Los Medanos College (16-9 overall, 10-3 in the BVC) on Thursday at the Baseball Field at 2:30 p.m.

It will be the first time these teams will match up this season.

In the top of the first inning against Solano, Comet catcher Lawrence Duncan made a pristine throw to second baseman Johnny Velasco to catch a Solano base runner attempting a steal.

In the bottom of the second inning, Duncan tipped a ball that landed in front of the catcher clearly hitting his foot, but the umpire ruled it a live ball, and Duncan was thrown out at first base.

Solano infielder Nolan Burr managed to manufacture a run in the third inning, which started with a bunt to move the runners over to second and third base. On the next play, Solano outfielder Jesse Phipps hit a line drive right at the Comet pitcher. He picked it up and threw out the runner at first base, but the runner scored from third base.

CCC demonstrated its competitiveness in a well-played game by both teams.

“Right now were just taking it one game at a time, and making sure our players are focused. We’ve been playing solid baseball,” coach Brian Guinn said.

In the fifth inning, Evan Faccenda, Solano  first baseman, hit a triple to the fence to bring in a runner from first base.

In the bottom of the fifth inning, Velasco singled and then stole second base to move to scoring position. On the next play, designated hitter Chris Brue hit a double that brought home runners from second and third bases.

In the bottom of the sixth inning, Comet third baseman Bryan Perez was hit by a pitch and trotted his way to first base. Then, left fielder Eric Whitfield reached first base  on an error made by Solano’s right fielder.

The highlight of the game came in the form of both speed and power. Shortstop Jamal Rutledge crushed a ball to right-center that ended up rolling out nearly 400 feet from home plate.

“When I was running around the bases I was just wondering if I could get home. Then I saw (Guinn) waving at me to go home while I passed third and I made it,” Rutledge said.

He could be seen swiftly scurrying around the bases, as he reached home plate making him the most valuable player of the game.

Comet first baseman Allen Ressler made it to second base on a hit-and-run play to eventually score the game-winning run.

“I was real focused, and this was a big game,” Ressler said.

In the ninth inning the Comets brought in their closing pitcher who shut the door on Solano’s offense.

The Comets used their bunting capabilities, speed and power hitters to earn a vital win against a team only one game ahead of them in conference standings.