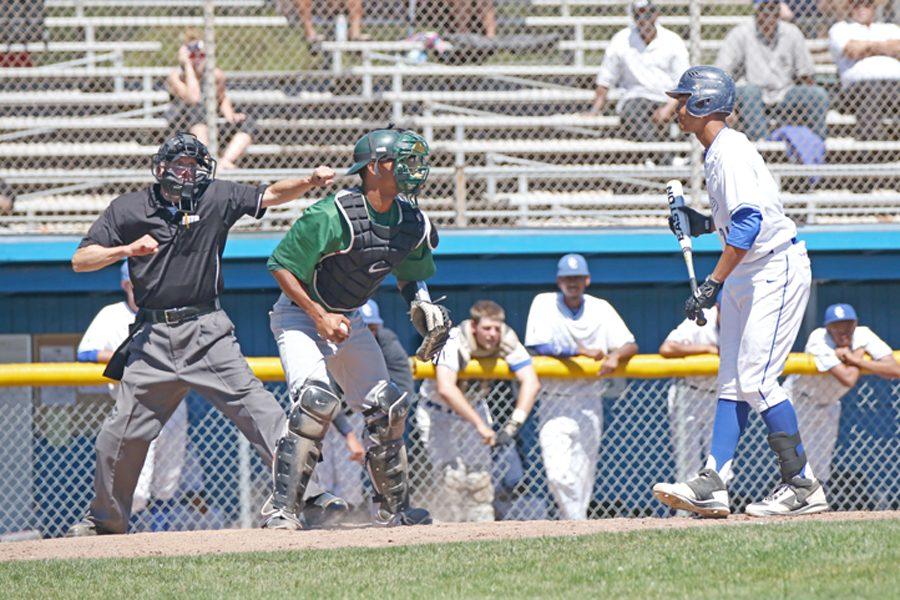 Comet infielder Chris Brue is called out after taking three strikes during CCC's 14-2 loss to Laney College at the Baseball Field on Saturday.

The Comets (11-18 overall, 7-12 in the Bay Valley Conference), fresh off a two-game winning streak, got behind first place Laney College early in the game and eventually lost 14-2 Saturday at the Baseball Field.

Comet starting pitcher Sean Jackson couldn’t contain the Eagles’ offense, as Laney (22-9 overall, 16-3 in the BVC) jumped out in front with four singles, two doubles and a walk in the first inning.

Contra Costa College returns to the Baseball Field Saturday to face the College of Marin at 2:30 p.m.

The first and fifth innings were the most problematic for Comet pitchers, as they contained Laney’s biggest rallies, giving up five runs in the first inning and six in the fifth.

“Our pitchers had a tough start and weren’t hitting their spots,” catcher James Hodgson said. “Laney’s pitchers stuck with their fastballs and changeups through most of the game, and we weren’t getting solid hits.”

Laney second baseman Jose Mercado got an RBI in the first inning with a double to deep left field driving in left-fielder Brandon Alenla.

With shortstop Mickey Nunes and right-fielder Trevor Greenley each thumping consecutive singles, that left the door wide open for designated hitter Kaleo Johnson to hit a double to centerfield, scoring both Greenley and Nunes.

In the Comet first at bat leadoff hitter Johnny Velasco didn’t hesitate to answer with a double on the first pitch off of the left-centerfield fence.

He then called a timeout after his slide into second base because he thought he may have rolled his ankle.

CCC infielder Eric Whitfield drove in Velasco on a line drive to centerfield giving the squad its first run of the game.

By the top of the third inning coach Brian Guinn had already made a few trips out to the mound to calm the infield down. He then turned the ball over to right-hander Kyle Brown (2-4) already down on the scoreboard 7-1.

Shortly after, he turned to his bullpen again, sending Joe Banks (2-4) out to the hill. He went on to carry the team on his shoulders for the next seven innings of the game.

Hodgson did a good job blocking the pitches behind the plate and keeping the ball in front of him.

Later in the third, a strike three pitch got away from Hodgson, but the Laney batter interfered with the throw to second, so the runner on first base was called out.

After seven scoreless innings for CCC, the Comets looked to regain a little momentum in the ninth.

Guinn substituted a lot of players and rearranged most of his lineup for the final three outs of the game.

In the ninth, with the first two batters getting hit by pitches, they managed to load the bases for Hodgson who got a hit up the middle.

Laney failed to get the runner at second and the throw to first base was no match for Hodgson’s speed. This was the Comets’ second RBI of the game, putting their run total at two for the day.

“That ninth inning is the type of  intensity we need to keep and continue playing with. We need to come together as a family. As long as we can keep playing with the intensity we had in our last two games in the North Bay we’ll be fine,” Banks said.

Even though CCC was dealt a damaging 14-2 loss to Laney, the final score has no correlation with how they’ve played late in the season.

Looking at the statistics, CCC has had a rather interesting season thus far.

During the first half of the season the Comets scored only nine runs after the sixth inning.

To the contrary, the second half of the season has been their time to shine.

“We will just keep playing every game like it’s our last one, and continue to work hard and get better,” Guinn said.

The CCC baseball team has accomplished something only three other teams in their conference have done — scored 30 or more runs after the sixth inning in the second half of their season’.