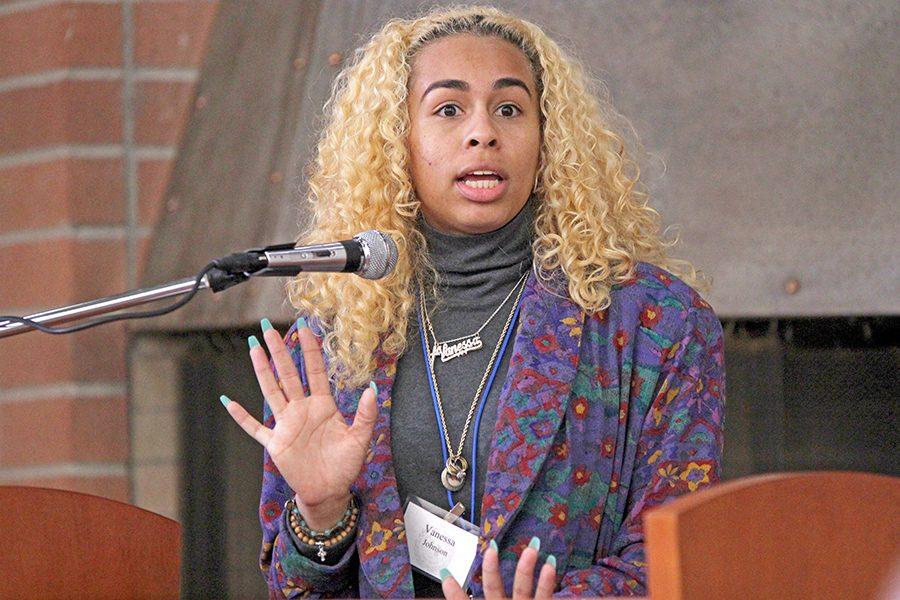 Counseling instructional assistant Vanessa Johnson recites her poem during the open mic event for students and faculty in the Library and Learning Resource Center on April 12.

Library department Chairperson Andrew Kuo riled up the audience with his third poetry reading and open mic event at the Library and Learning Resource Center on April 12, offering staff and students a chance to present their literary works.

Although the second poetry reading and open mic event was last fall in October, Kuo said he decided to hold the event in April this time because it is deemed as a poetry month.

“I want the campus to be exposed to poetry, creative fiction and to get people to listen to different voices on campus,” he said.

He invited five faculty and classified staff participants, three of whom are adjunct and full-time English professors. Students also signed up at the event to share their literary works.

“There are two ways to approach poetry,” she said.

One is the mind and the other is the heart. If students have a hard time understanding poetry, they should see if they can feel what the poet is saying, she said.

Del Bourgo said she still writes poems about her deceased parents, whose loss is engraved as a wound in her heart.

She introduced two poems, one called “Roses and Moons” and the other epistolary poem, a poem in the form of a letter, titled “Dear Father.”

She said she dedicated “Roses and Moons” to her mother who died 16 years ago.

“She cries out once. Twice. Then lapses into silence,” she said, reciting a verse of the poem.

English assistant professor Dickson Lam read an excerpt from his memoir, recounting a day when his mother asked him to attend Lowell High School, setting high expectations on him.

He wanted to go to a high school “outside his zone.”

He said he attended middle school in San Francisco. At that time students were required to fill out applications if they wanted to attend a high school outside of their neighborhood.

He said when he brought the paperwork to his mother to sign while she was washing the dishes, she squinted in dismay. She questioned why he didn’t apply to Lowell, a revered high school in San Francisco.

“If I were to get into Lowell she would do a victory celebration in Chinatown, and boast to everyone about the privilege,” he said. “But the deadline was passed, so I couldn’t go.”

He recounted the times his mother boasted and praised him in front of cashiers for his hard work and effort in school.

“At the beginning of middle school I received A’s and B’s, but my mother expected a 4.0,” he said. “Anything I did was a bonus. So my mom insisted to get things straightened out by going to Lowell High School.”