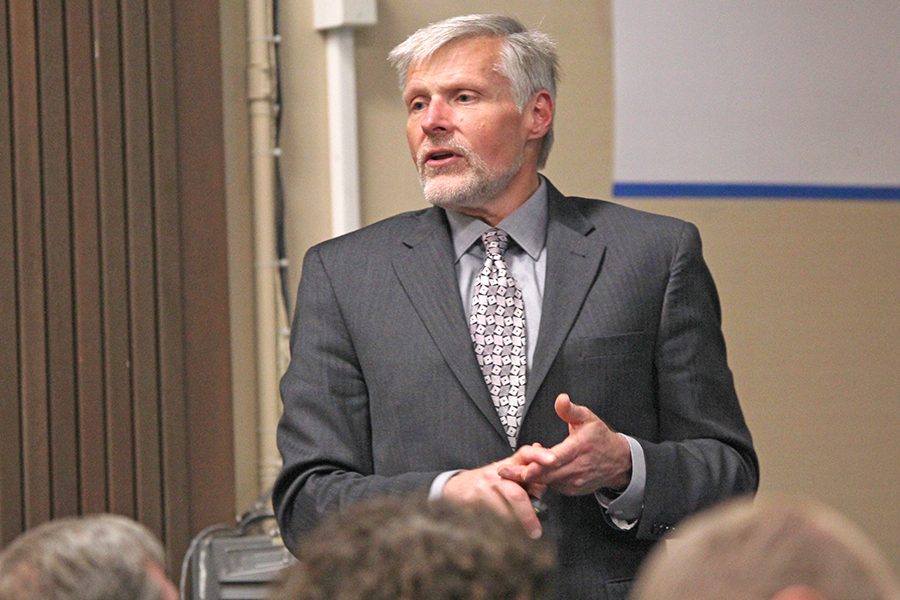 The 2016 Budget Forum was presented as a PowerPoint on April 13 in HS-101 by District Vice Chancellor Gene Huff and Chief Financial Officer Jonah Nicholas. Chancellor Helen Benjamin was originally to attend, but was unavailable due to an engagement on the East Coast.

Huff said enrollment sank from its recession peak in 2009, and stayed mostly flat. The district has not hit its FTES goal in years now.

A Full Time Equivalent Student (FTES) is 15 units of classes being taken by students. FTES count is the yardstick the state determines most of a college’s funding.

Huff said Contra Costa College has a resident FTES goal of 5,581, but will achieve around 4,653 in the 2015-16 fiscal year, a shortfall of 16.6 percent. Diablo Valley College will have shortfall of around 3.3 percent, and Los Medanos College around 1.2 percent. Between them, that is a shortfall of 1,515 FTES, an average 5.3 percent shortfall.

The presenters said the district survived by borrowing FTES count from the 2016 summer semester, placing the district on what’s called “stability,” promising that FTES will be made up later. This caused a pattern of borrowing and stability that repeats yearly, maintaining funding, but preventing the district from claiming permanent growth funds that would be added to its base, annual funding. In 2012-13 the district missed $900,000, and in 2014-15 missed $3.7 million.

Huff said based on the projected FTES shortfall, the Governing Board approved borrowing all FTES from summer 2016 to use 1,515 FTES to cover the shortfall, getting the $7.2 million in already budgeted revenue, and the rest to generate extra around $3 million in one-time revenue over two years, and get $8.3 million in additional apportionment revenue.

Huff said the hope is to pay down long-term liabilities, and invest in future FTES generation. To encourage new students, districtwide commercials have been made, the district Enrollment Management Framework made guidelines for all three colleges and student services has been budgeted an extra $2.7 million.

FTES from about 2,707 non-resident or international students (about 2,334 at DVC) have grown since 2009-10 and now provide about $13.5 million in additional revenue, the presentation said.

Huff said the budget was adopted with a $4.8 million structural surplus, largely predicted on the cumulative revenue from a 1.02 percent cost of living adjustment for $1.35 million, a $6.9 million increase in the base allocations, and $1.54 million from funds earmarked for full-time faculty hires (21 new hires across the district).

Huff said in October 2015, the Governing Board approved a 5 percent salary increase for permanent employees, retroactive to July 1, 2015, adding a $5.1 million salary cost to the district.

Since California’s economy is growing faster than the national average, the state is stockpiling a rainy-day fund, against the next economic downturn. Nicholas said the Legislative Analyst’s Office “projects really rosy figures,” and says the rainy-day fund will grow, with enough left over to raise funding to community colleges. If LAO’s projection is wrong then the fund will be needed.

The presentation quoted Gov. Jerry Brown saying, “Between 2000 and 2016, you find that the total deficits were seven times as large as the surpluses, resulting in painful, and unplanned for, cuts.”

LAO states, “A sizable reserve is the key to making it through the next economic downturn with minimal disruption to public programs.”

Nicholas said if a new recession begins, the existing fund will be insufficient to prevent cuts to the district’s budget in 2019-20.

Nicholas said, “The (state’s community college) budget is disappointing. This is not what we were looking for and does not (address the district’s concerns.)”

Nicholas said the major proposals of Brown’s budget include 2 percent growth funding, systemwide, giving the potential for districts to earn an extra 575 FTES worth about $2.7 million, but on stability, the district will see none of it.

The second proposal is a 0.47 percent Cost of Living Adjustment, amounting to $600,000 in ongoing apportionment funding, which Huff said is so small “it’s a joke.”

Third is $283 million allocated systemwide for deferred maintenance and instructional equipment, of which the district gets about $6.4 million, Nicholas said.

Fourth is $76 million systemwide, and $1.6 million for the district in one-time funds for mandate cost claim reimbursements, Nicholas said.

In January 2016, Brown proposed a $200 million increase to the Strong Workforce Program to expand access to career technical education and implement a regional accountability structure. The presentation said it is unknown how the district would participate or benefit.

Unearnable growth, COLA that ignores ongoing and increased costs, no increase to base funding and minor amounts of one-time funding all fall short of the district’s needs. Nicholas said the district is hopeful for a better picture by the May budget revision.

Huff said that between the Governmental Accounting Standard Board 68, 74 and 75 provisions the district’s position regarding pension, and benefits, is dangerous.

This is bad because the value of the district’s holdings represents what can be sold in an emergency to cover pension costs. If the district looks unreliable, its credit rating could be lowered, and interest payments increased, Huff said.

Huff said, “It’s not just us, it’s all (California’s) colleges.”

“Due to alarmingly high liability (under GASB 74 and 75), a more aggressive investment scheme was chosen.”

That trust has grown impressively. Currently the district has  $77 million to cover a liability of about $172 million. About $95 million will be added to the district’s liabilities in 2017-18, Huff said.

Between GASB 68, 74 and 75, the district must recognize $250 million more in liabilities by 2017-18, likely giving the district negative net value, Huff said.