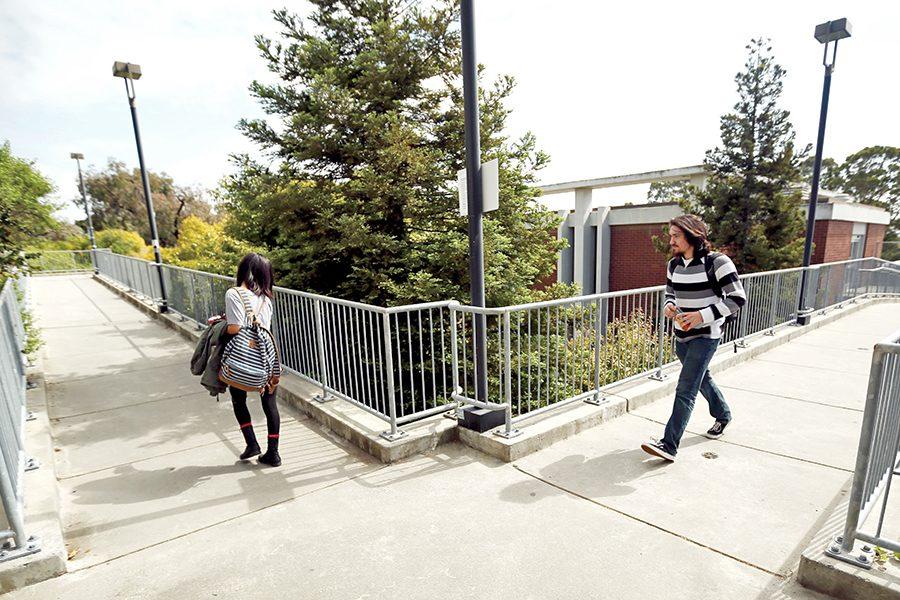 Two students walk across the bridge where two armed robbers held up Douglass Castro (not pictured) at 2:40 p.m. on April 5 between the Liberal Arts Building and Physical Sciences Building.

Twenty-one-year-old student Douglass Castro had his wallet taken at gunpoint by two unknown assailants on the elevated walk bridge between the Liberal Arts Building and Physical Sciences Building on April 5 at about 2:40 p.m.

Castro, enrolled in Contra Costa College’s Gateway to College high school program, said he was late to class so he decided to use the L-shaped bridge to get to the second floor of the LA Building.

The stretch nearest to the LA Building is exposed while the area where the armed robbery happened is covered by trees and hugged by the PS Building.

“It shocked me. I always expected this campus to be air tight,” Castro said. “For the most part it is, but there are areas where it is not secure.”

While walking on the bridge, he said he heard someone say, “Don’t turn around, give me your wallet” as he was shoved forward.

“So I turned. I thought it was a friend of mine playing around, but it wasn’t a friend,” he said. “Then it happened. I had a gun pointed at me and one of the guys reached into my back pocket.

“I’m glad I was broke that day. The only things I had in (my wallet) were my student ID, California ID, debit cards and other business cards.”

Castro said he wasn’t able to get a good look at distinguishing facial features, but he gave some general information to Police Services student aide Parmdeep Singh about the two suspects still at large.

Corporal Tom Holt sent out a campuswide email to students and faculty describing the armed robbery suspects as two 5-foot-10 inches to 6-foot tall African-American males about four hours after the incident.

Holt said Castro’s wallet was returned to Police Services the next day after being found at the Bus Transfer Center.

Castro said he checked the contents of his wallet but could not tell if anything was stolen.

Castro said he also told Singh that he was not sure if the gun they pointed at his head was real or not and raised further questions about the suspects’ intentions.

“The way it looked and the way he was holding it, I was not sure if it was a gun or a pellet gun,” he said. “It looked like a Glock but the barrel was short and it felt like he didn’t want to (shoot).”

He said the armed assailant asked if he had any cash in his pockets while his partner moved behind Castro to pluck his wallet. He said they both then ran toward the Student Services Center with his wallet.

Castro said he wanted to seek revenge on the suspects at first, but finding God changed his mind.

Singh, also a criminal justice major, said, “(Castro) was walking fast so I stopped him and asked him what was wrong. He told me he was just robbed. I was the first person he approached.”

Singh said he has been a police aide on campus for two years and this is the first incident in which someone was robbed at gunpoint.

“I escorted him back to the (Police Services building) while asking him questions like are you OK? Are you hurt? What did they look like?” he said. “He seemed all right so I then told Officer Vanessa Avilos and she compiled the report.”

Since Castro was robbed on the bridge, Singh and Holt said Police Services has increased the frequency of police officers and aide patrols throughout the day and during night classes.

According to a Contra Costa Community College District Crime Awareness Report, there have been 10 robberies and seven arrests for weapons on campus since 2012.

These statistics at CCC are the highest rate at any campus in the district.

Middle College High School student Danilo Moran said the walk bridge is visibly obstructed by trees so he is not entirely surprised that a robbery took place there.

“I don’t think this area is safe. It’s scary because not everyone is always in a group. I know I am not,” Moran said. “Also, there is lots of tree coverage. The view from below is blocked.”

Neither stretch of the walk bridge is monitored by a surveillance camera.

But Holt said if the district’s plan to install cameras at the campus entrances were completed, police officers investigating the incident would have an easier time tracking down the suspects.

Gateway to College student Ashley Stevenson said she was surprised because the walkway it is an area that sees a lot of traffic.

“I don’t think a camera would help –anything. There are a lot of people around here and they wouldn’t have anyone to (monitor) the camera anyway,” Stevenson said. “I’m not tripping off (being robbed) because I’m worried about other things and I am always with someone else.”

Holt said, “(Cameras) are everything. If a camera is there and people think they could be caught on tape, then it can be a deterrence that way. We can also go back and look at the tape for investigative purposes.

“When we do  get the new cameras, I hope we have someone to monitor them,” he said. “But it is all about the money and what the district can afford.”