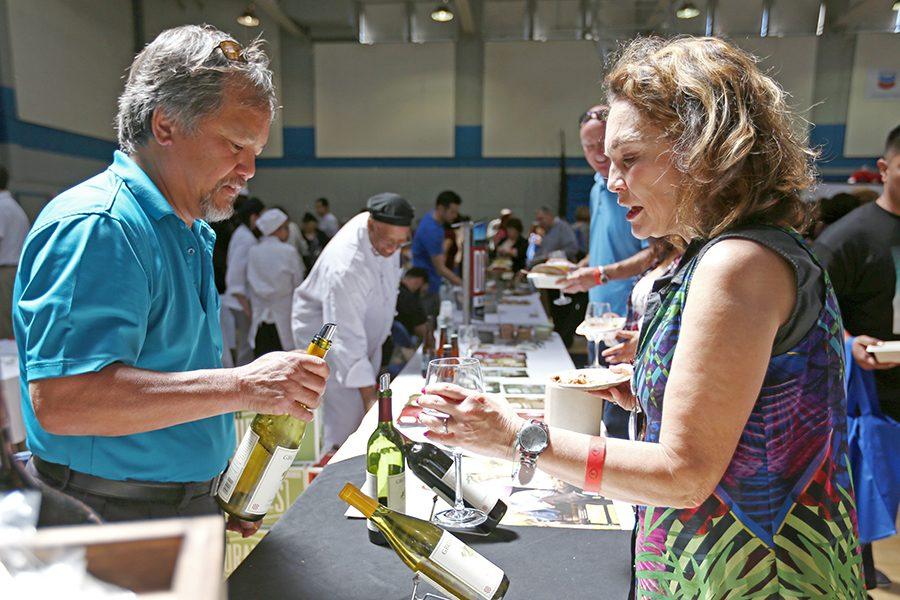 Richmond resident Darlene Drapkin samples a glass of wine from the Grigich Hills Estates collection during the 9th Annual Food and Wine Event in the Gymnasium on Sunday.

In order to fund the culinary arts department’s students’ study abroad scholarship to Italy, wine, cakes, pastas and other delicacies enticed donors along with community members in support of the 9th Annual Food and Wine Event.

An estimated $40,000 was raised during the Food and Wine Event from 11 a.m. to 2:30 p.m. on Sunday in the Gymnasium, culinary arts instructional assistant Angel Chau said.

“It is important to support the culinary program because the students are raising money for the Italy trip,” San Pablo community member Mariane Basilio said.

She said she and her family attend the events mainly for the food, not so much for the wine.

Sharkes said the targeted population is adults, mainly because of the wine and the price of admission. Pre-purchased tickets were $35 and general admission was $40 at the door.

Sharkes said it is a year-long effort for the planning of the sold out event.

Chau said they sold about 500 tickets and are waiting for other attendants to pay for early RSVPs.

Numerous items were auctioned off in the name of education, including wine, gift certificates, hotel accommodations, glassware and fish.

Kinesiology major and dancer Andrew Lily was a dancer in one of the performances during the event.

Lily said, “Everyone has put in quite a bit of effort on the details. The servers here are using lint rollers to remove the lint from their aprons. That’s how much preparation is going into this event.”

The 43 vendors prepared for the estimated 900 people in attendance.

Chau said they had to use the Gymnasium to have enough space for the guests.

The background echoed with the sounds of classical music as guests were treated to a waltz and a bachata dance performance by Natalia Clarke’s dance class.

Administration of justice department Chairperson Rick Ramos said he and his band try to support their colleagues and elected to play for free at the event.

His band, the GTS, is a funk soul group that specializes in music ranging from the 60s-80s, as well as contemporary hits.

Hilltop Ukulele Lovers Academy Director Debbie Cyr said they performed Ukulele in order to support the community her husband was part of when he was a part of the college.

“He became disabled and formed his first Ukulele group at the YMCA in Hilltop,” Cyr said.

The food vendors in attendance provided samples of their dishes.

Many of the vendors and food preparers in attendance were once part of the Contra Costa College culinary arts program and returned to give back to an established institution.

Executive Chef at Moraga Country Club Gregory Roemer said he is an alumni of the culinary arts program and wanted to be part of the event to give back to the community.

“We hope to gain recognition as well as let people know that we are from a small town but we have amazing food. We are actually a hot spot in our community,” he said.