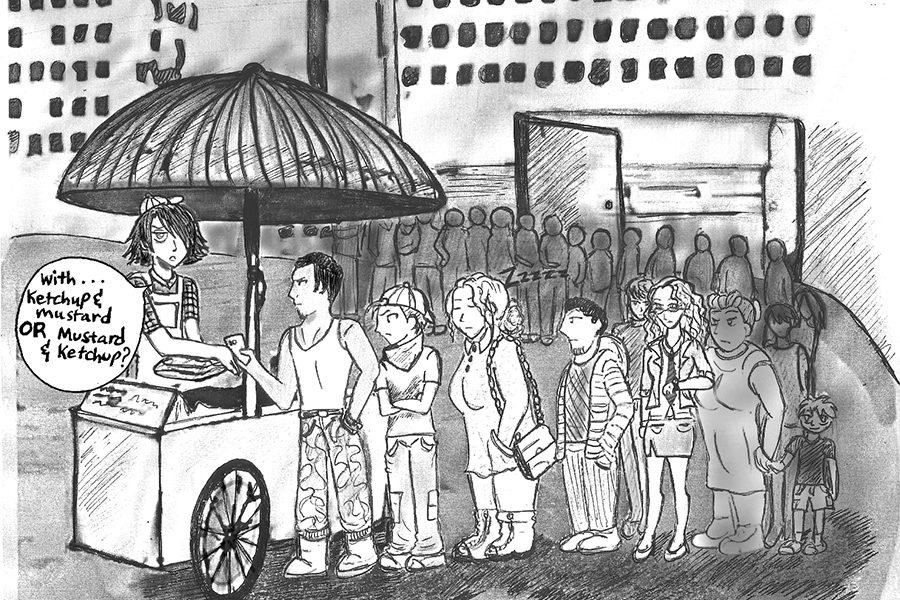 Students will soon have multiple food options on campus with the completion of the College Center building in the fall of 2016. A new food vendor is scheduled to be approved by the Governing Board on May 25 with more specifics to be revealed later.

As students go through their day on Contra Costa College’s campus, hunger drives them to one of just three options, — Subway, the Bookstore, or the Three Seasons Restaurant.

While members of the Associated Student Union helped select one new food vendor to bring to Contra Costa College, they cannot presently provide any information about  that vendor because of the college business policy, Vice President of Club Affairs Safi Ward-Davis said.

The contract is slated to be approved by the Contra Costa Community College Governing Board at its meeting on May 25 Business Services Director Mariles Magalong said.

The new food vendor will be located in the Cafeteria in the new College Center building once it is completed before the 2016 fall semester.

District senior Buyer Ben Cayabayab said he is unable to reveal the name of the food vendor selected after an interview and taste test in AA-217 on April 11 because it is protected by the college’s business policy.

Francis Samson, an ASU senator who was present at the taste-testing interview, said that the announcement will be made on the college website after the contract is approved.

Mehdizadeh said that the interview included a food tasting between two vendors.

The food’s taste, along with how healthy it is, played a role in the decision of which vendor they chose, she said.

The Three Seasons Restaurant is located on the second floor of the Applied Arts Building and is one of the few alternatives to Subway’s sandwiches, or the Bookstore’s snacks.

Some students like Carlos Campos, an automotive major, said he can eat just Subway, the only outside food vendor located in campus, every day.

However, not everyone has an appetite that can settle with a repetitive diet.

“Jared, the Subway guy, can, but I can’t eat Subway every day,” Diego Gomez, an undecided major, said.

The other options on campus are also hit or miss among hungry students with little time between classes.

“Sometimes the (Three Seasons) quality (of food) is not the best,” Amar Isa, a biology major, said.

Isa said some of the food sold at the Three Seasons Restaurant could be made with better care as she points to her cold Chicken Stir fry noodles. “It is cold, and inedible, but I’m hungry.”

Sakeema Payne, fine and media arts major, said the prices for Three Seasons burger and fries went up, but the portion was cut.

Freddy Delgado, undecided, said that not having many choices of food on campus tempts him to leave campus to get something to eat, but wastes a lot of time. Delgado said that there should be more variety of food choices on campus.

Basil Thompson, psychology major, said there are not many healthy choices on campus or choices for students after the Three Seasons Restaurant closes at 1 p.m., and there are none when the Bookstore and Subway close by 6 p.m.

But there are always alternatives to bypass the lack of food on campus like bringing food from home like Binu Guatam, a biology major.

Guatam said she always brings food from home because it is just easier.

Student Bryan Rodriguez said he isn’t affected by the lack of choices because he is not on campus all day and doesn’t have to worry about buying food on campus.