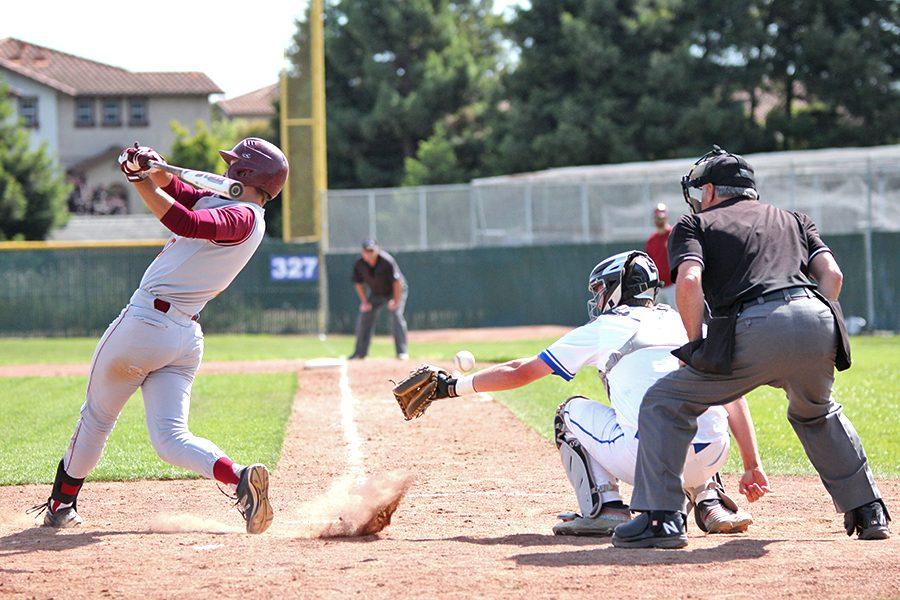 Mustang sophomore Ethan Utler strikes out during the Comets’ loss to LMC on Friday.

After suffering a heartbreaking ninth inning collapse to lose 4-3 at home against Solano College Thursday, the baseball team lost its final game of the season 5-2 against Los Medanos College Friday at the Baseball Field.

Despite the fact that the Comets (12-22 overall and 8-16 in the Bay Valley Conference) played such a good defensive game and made a lot of contact, they weren’t able to score enough runs to give them a comfortable lead Thursday against the Falcons.

Comet starting pitcher David Gustafson and reliever Antonio Straughter kept Solano’s scoring to a minimum until the ninth inning saw the Falcons swoop into the lead by capitalizing on the Comets’ late game mistakes.

“We did a great job keeping base runners from scoring until the end of the game.  They just executed on our mistakes,” CCC catcher James Hodgson said.

Close games have been a problem for the squad this season. The team has played eleven one-run games this season and has a 3-5 record in those contests.

The Comets had opportunities to capitalize against Solano’s pitching, but ended up leaving runners on base.

In the first, third, fifth and sixth innings, CCC left a total of seven runners on base without bringing them around to home plate.

After Gustafson allowed two runs to score in the third inning, coach Brian Guinn pulled him and brought in Straughter for relief.

The sophomore settled into his groove and retired all three batters in order in the fourth, sixth, and eighth innings.

Jamal Rutledge was a major contributor in CCC’s eighth inning rally against Solano, as was Eric Whitfield in Friday’s game against second place Los Medanos (24-12 overall and 18-6 in the BVC).

Rutledge scored the go-ahead run in the bottom of the eighth on a single, giving the Comets a 3-2 lead.

“Yeah, I hit a nice chopper up the middle and scored a run when we needed it,” Rutledge said.

Against Solano, in the top of the ninth with only one out and runners on first and second, Straughter intentionally walked  Falcon catcher Andres Quijada to load the bases in an attempt to get a ground ball for a double play and win the game.

Guinn made the call to the bullpen and brought in Sean Jackson, who ended up allowing pinch hitter Briar Litz to single, driving in Luke Knoble from third for the tying run.

The following batter, Joseph Quintanilla was hit in the foot by a wild pitch, which brought in Evan Faccenda, giving Solano the go-ahead run and a 4-3 victory.

Against the Mustangs, CCC found itself in another late-game predicament where Whitfield got an RBI, scoring Velasco from third in the sixth inning.

Unfortunately, against LMC the Comet offense stagnated and once the Mustangs took a three-run lead in the third they never let go of the advantage.

After allowing runs in the third, fifth and seventh innings, the Comets eventually lost to the Mustangs 5-2.

Although the Comets lost their last two games, they finished with twice as many wins as they had during the 2015 season.

“It was a successful season and we made tremendous improvement, because they batted to the end,” Guinn said.