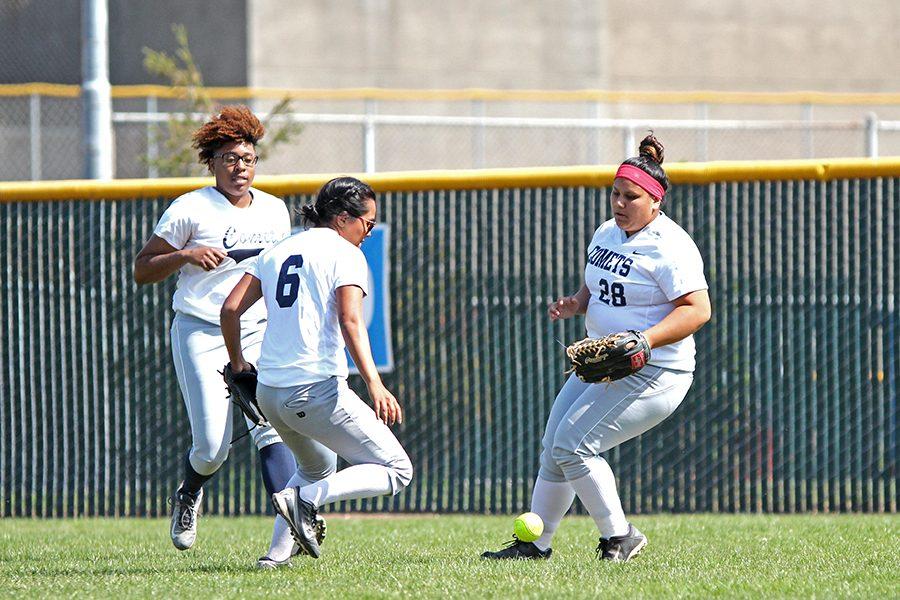 The Comet softball team (0-26 overall and 0-22 in the Bay Valley Conference) played its last two games of the season against Napa Valley College losing both contests 20-1 and 18-2 April 26 at the Softball Field.

The second place Storm made quick work of the Comet squad, putting up 10 runs in the fourth inning of game one and then tacked on a 13-run second inning in game two.

Even though Napa Valley scored four runs in the second inning of the first game, Comet center fielder Mi’Jae’ Wilson kept hope alive when she grabbed a line drive on a short hop and heaved it to catcher Sidney Davis saving the fifth run of the inning from scoring.

“I always have confidence in my throws and I definitely knew it was going to be an out,” Wilson said.

Whether it’s baseball or softball, anytime a team commits 28 errors and walks 23 batters in a two game series it’s going to be hard to re-focus and put the team in a position to win. And that’s what the Comets did on Tuesday.

In the first inning of game one Napa Valley (18-19 overall and 17-7 in the BVC) scored its first run by stealing home after an errant throw got past CCC first baseman Amy Palomares.

In the Comets’ second inning, Wilson hit a grounder to Napa Valley third baseman Briana Reason who couldn’t complete the throw to first base in time to get the out.

Throughout the season, Wilson has shown a penchant for beating out throws to first base although the Comets were never able to take advantage of her speed on the base path.

Wilson is a talented player who throws right handed, but predominantly bats lefty (although she considers herself a switch-hitter).

“I’ve been playing organized softball since my sophomore year in high school, and it wasn’t until I got to CCC that I tried to hit left, and it transformed me,” Wilson said.

The Storm flooded the fourth inning with 10 runs on four singles and three walks, making the score 17-0 through four complete innings.

Although Comet starting pitcher Anna Palter was able to initiate routine ground balls, one of CCC’s main problems was its infield’s inability to field them, or field them quick enough to get the runners out.

“I was too focused on how much my arm hurt during the first game, and was more comfortable at shortstop,” Palter said. She moved to shortstop for game two.

Scooping up ground balls and consistently throwing runners out has been a problem that has plagued the Comets for the entirety of the season.

At a crucial point in the game, Comet second baseman Nancy Bernal hesitated to put her glove down, and the ball sped below her glove into the outfield grass.

“I try my best not to let the ball get past me and I get irritated when it does, but I’m usually able to make the adjustment,” Bernal said.

While being outscored 38-3 in their last two games this year, the Comets showed improvements on offense in the second half of the season. Polamres had a good day batting three for three with one RBI, ending her season on a positive note.

“I had a good game on offense, and wanted to make this game memorable,” Polamres said.