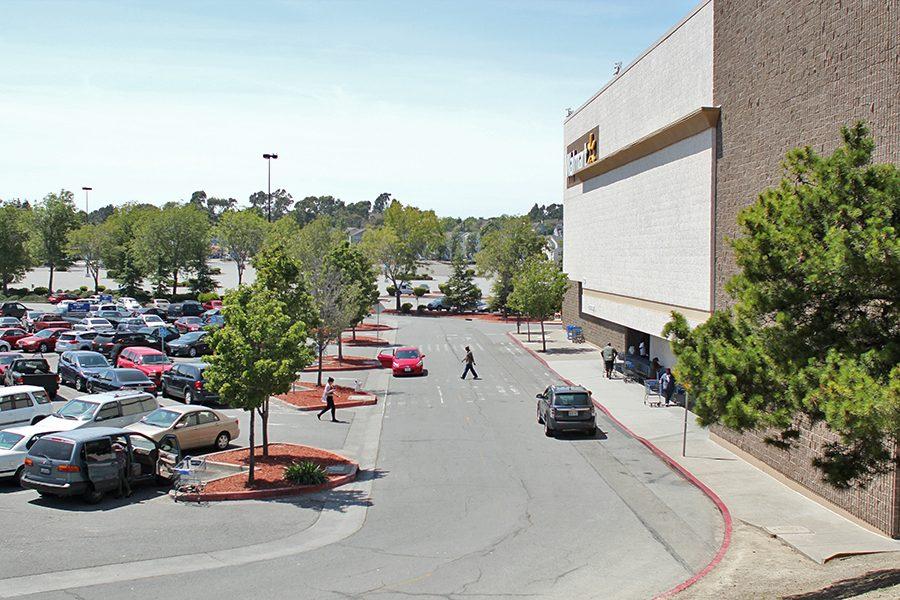 Shoppers travel to and from Wal-Mart on Monday. Hilltop Mall slipped into foreclosure in June 2013 after the former owner, Simon Property Group, Inc. failed to repay a loan that used the mall as collateral.

Hilltop Mall was once a flourishing collection of businesses supporting an expanding residential community during the 1970s and 80s. This year the outdated property will be sold and re-configured to better meet the standards of local consumers.

The property, placed on the market in March 2016 via real estate brokerage firm C-III Realty Services, is waiting for the next successor to transform the mall into the bustling center of economic viability that it once was.

Richmond Mayor Tom Butt said the bidding period for developers who wish to acquire the property ends in late spring.

“Sometime in the first week of May, we should have a sense, when offers will be cut off,” Butt said.

President of the Hilltop District Homeowners Association Cesar Zepeda said that he has met with several developers and has given weekday tours around the property.

“We have a lot of interested buyers from firms in the Bay Area and out of the state,” Zepeda said.

The mall slipped into foreclosure in June 2013, after the former owner Simon Property Group, Inc. failed to repay a loan that used the mall as collateral.

Residents throughout Richmond have mixed feelings of what might take place on the property.

Some local shoppers question what will happen to the department stores that are operating in the mall.

Carol Jennifer, a Richmond resident who has been shopping at Hilltop Mall for 23 years, said, “I shop here often, but mainly at Macy’s and JCPenney. If these department stores are gone (from the mall), I will be deeply saddened.”

Anchor tenants Macy’s, JCPenney, Sears and 24-Hour Fitness own their own property on the site and will need to be consulted before a major face-lift can occur.

Wal-Mart has a lease that extends until 2020. It will need to make a decision on whether to remain on the property or not.

“The department stores want to stay there, but they would like to have the structures demolished and rebuilt into a different configuration,” Butt said.

Not only are there department stores occupying the mall, but all of the tenants that are located within the property are also in limbo.

“What I’m hoping to do with the smaller businesses is to be able to place them on the redeveloped outskirts of the mall or relocate them to another area in Richmond, such as downtown so we can maintain that tax money in the city,” Zepeda said.

Indoor shopping malls across America have been struggling to survive due to economic and safety issues.

“Malls were successful at one time, now the majority of them are on the decline and end up being demolished,” Butt said.

The next phase of Hilltop Mall has been discussed briefly by city officials.

Nearby Bay Street Emeryville is a similar shopping center that is seen favorably by the city and the community based on the structure and concept. It has retail shops on the first floor with residential spaces on the top of the buildings.

“Some of the potential buyers are checking in with the planning commission and asking questions about what they might do there (Hilltop Mall),” Butt said.

A new plan has begun to replace the existing  Hilltop sign that is located near the I-80 corridor.

“We are proposing what type of signage will be placed on the I-80 corridor,” Zepeda said.

“We are looking through several other projects within the Hilltop District, adding additional traffic lights on Hilltop Mall Road is one of them.”

Michael Piazzola, general manager of real estate firm Jones Lang LaSalle, management surrogate for the mall, declined to name the potential developers who are interested in buying the property.

“The special servicer for the foreclosing Trust, C-III Asset Management, does not want to issue any statements at this time,” Piazzola said.