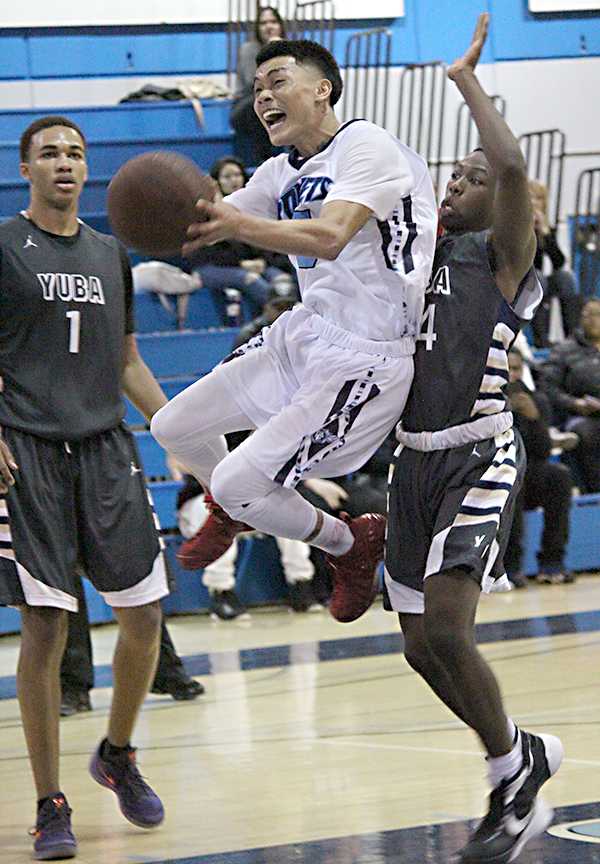 After missing the playoffs in the 2014-15 season, the Comet men’s basketball team rebounded to win the Bay Valley Conference crown on its home floor this year before riding its 25-8 record all the way to being one of the final eight teams in contention for a state title.

Aside from grabbing nine more wins this season, the Comets elevated their team statistics in some of the more meaningful categories. Points per game jumped from 75 to 80 points while gains in field goal percentage, assists and rebounding were also made.

With only two returners from the previous squad, chemistry was an early concern and the team split its first 10 games. But the Comets finished their non-conference portion of the season by rattling off six wins in a row, including a championship at the eight-team Chabot College tournament.

Seemingly firmly on track, the team opened conference play by losing a 90-86 nail-biter against Yuba College on Jan. 5 in Marysville. The 49ers swept the season series against the Comets in the previous year, winning both games by an average of 12 points in those contests.

That loss served as a turning point for the team. The Comets used their misfortune as an opportunity to re-focus and re-load turning their ire toward the BVC.

From that point on, CCC would annihilate most of its conference opponents. The squad won 15 of the next 16 games, beginning with a 12-game winning streak, that effectively clinched the conference title.

“I’d give this season a 10. Everyone was local, no out-of-state recruits and we all remained eligible — that’s an accomplishment,” sophomore Larry Wickett said. “We went 11-1 in conference, hosted a playoff game and our coach won BVC Coach of the Year.”

Johnson was not the only award recipient, as sophomore guard Bobby Syvanthong and Wickett were named to the All-State team.

The Comets were afforded a first round playoff bye and would host Cosumnes River College in the second round of the playoffs.

CCC dominated the Hawkeyes in San Pablo, but remained the underdog in its next bout against 29-point per game scorer Derrick Randolph and the Feather River College Golden Eagles.

After the five-hour bus ride to Quincy, the team started flat and fell behind by 23 points. Inspired team defense and a breakout 25-point performance by freshman sharpshooter Jeremiah Alston led CCC back from the abyss and to a 106-84 win.

Thirty-two games and five months after its Nov. 5 season-opening loss to Columbia College, the Comets found themselves one game away from playing in the state’s Final Four.

CCC fell behind early in its Elite Eight match up at Fresno City College. Hindered by another slow start, the team found itself behind by double-digits at halftime.

The Comets surged and outscored the Rams in the second half, but eventually found themselves on the losing end of a 100-89 contest and eliminated from state title contention.

“It was a good season. It’s the furthest I’ve been in my whole life as far as playoff basketball is concerned,” Alston said.