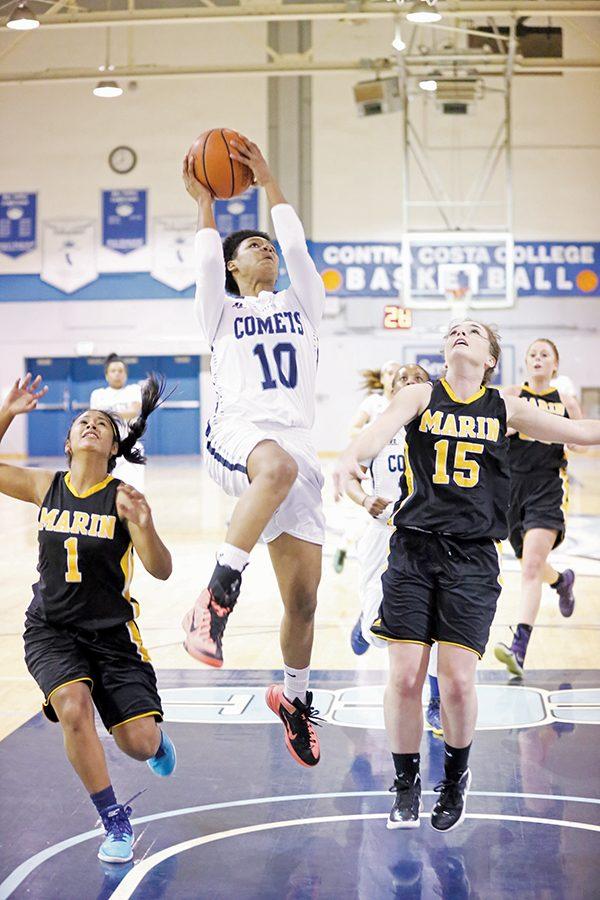 Comet forward Jacqie Moody shoots a layup against Mariners’ guard Molly Carmody during CCC’s 80-57 win against College of Marin in the Gymnasium on Jan. 29.

Upon losing more than half of its roster to defections and eligibility issues shortly before beginning Bay Valley Conference play in January, and after ending a tough preseason schedule with a 10-8 record, the prevailing belief was that the Comet women’s basketball would miss the postseason for a second year in a row.

The only people holding firm to the belief that the season was not over were the coaches and the six players left on the Comet roster.

“After we lost half of our team, coach Ebony (Young) and I talked to the team after a practice to tell them I planned to find some extra players,” coach Paul DeBolt said. “First it was Juju (Julian Robinson) shaking her head no, then Jacqie (Moody), and the rest of team followed.

“Right then and there the 6-Pack was born.”

The team also averaged five more assists (20.4) and four more rebounds per contest (46.3) than the team did last year.

Contra Costa College skewered its first nine BVC opponents. Its only in-conference hiccup came in the form of a 79-71 home loss to Solano Community College.

In that game only one player from either team had more than 20 points, First Team All-BVC sophomore guard Tynisha Adams.

DeBolt also won BVC Coach of the Year for the eighth time in his career.

The Comets flexible, inside out, up-tempo style proved to be too much for most teams to handle, but with passions high following the Solano loss the team was itching to atone for the defeat.

Those passions overflowed onto the court in the following game, a win at Yuba College in Marysville, as sophomore guard Sidney Vidal spewed a four-letter bomb that got her ejected from the contest and suspended for the following game at East Bay rival Laney College.

The BVC finale against Laney held extreme significance as both teams owned identical 10-1 records with the winner to be crowned conference champions.

So, with only five available players, the Comets took the court in front of a hostile Oakland crowd and promptly beat the brakes off of the defending champion Eagles, snatching the conference crown for its own.

Adams led all scorers with 26 points and sophomore Briah Davis made multiple defensive plays without an available respite to nurse her injured knee.

“After we lost half of our team it forced us to become closer,” Davis said. “The closer we got the more successful we were.”

The Comets, who finished the regular season 21-9, opened playoff competition as guest to the Vikings of intradistrict rival Diablo Valley College. CCC’s poor shooting behind the 3-point arc failed to slow its progress and the team led by two points after the first quarter. But the Comets trailed by four at the half.

In a display of grit and will, the six-player Comet squad forced a perennial powerhouse to overtime, eventually losing by two, 82-80 in the closing seconds of play.

“We went through a lot this year. We learned so much and grew as players and as people,” Pounds said. “It was a great season, despite how it ended.”