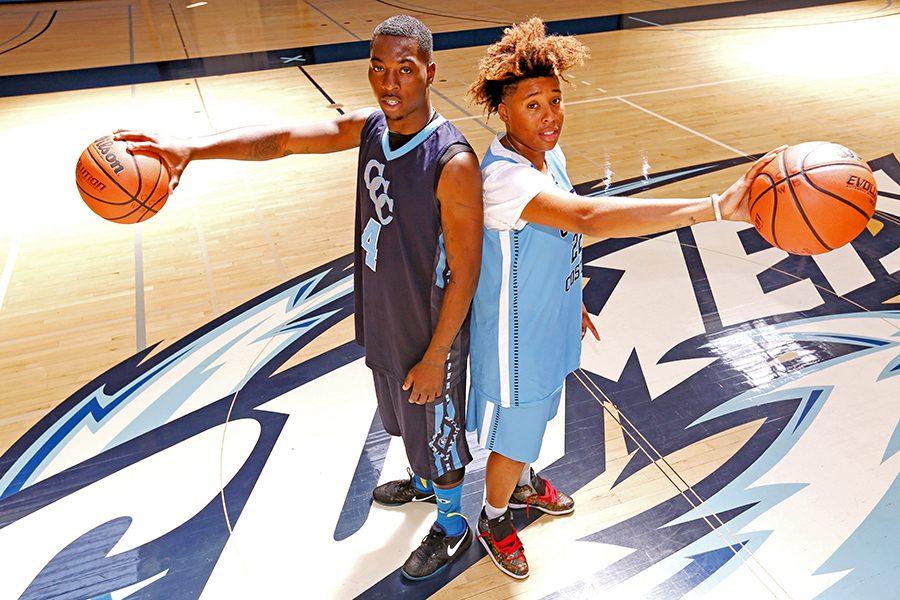 Forward Larry Wickett and guard Julian Robinson earned 2015-16 Athlete of the Year honors for their leadership and outstanding performance on and off the court.

In order to achieve greatness and stand out in a team sport, a basketball player must excel at executing individually on both the offensive and defensive ends of the court. He or she must elevate their teammates to perform at a high level as well.

Sophomore Comet forward Larry Wickett, The Advocate’s 2015-16 Male Athlete of the Year, exemplifies what it means to work hard.

Wickett is a standout player from a standout team. He was named the Most Valuable Player in the Bay Valley Conference this past season and won First Team All-State honors as well.

“I knew I could perform at a high level this season,” Wickett said. “I came into the season confident and knew as long as I put in the work I’d achieve what I wanted.”

Alongside his individual honors, he helped lead the Comets to the BVC championship and the state Elite Eight in the postseason.

Wickett averaged 15.0 points, 7.3 rebounds and 3.2 assists per game this season.

The versatile forward finished in the top 15 in points, rebounds, assists, blocks and steals per game in the BVC.

Men’s basketball coach Miguel Johnson said Wickett was called upon to do anything the team needed to get the victory.

“I could have Wickett go out there and score 30 points every night,” Johnson said, “but he was able to do anything we needed him to do, like fight for rebounds or defend their best player.”

Johnson said Wickett set the tone for how hard the team would play and everyone would follow his lead.

Wickett said, “I do a lot on the team. My role is just to go out there and do whatever it takes to get the win.”

The forward came to CCC from Vallejo High School as a talented player, but he admits he didn’t work as hard as he could have.

Athletic Director John Wade said Wickett is a big-time athlete and would have been a PAC-12 athlete out of high school if his academics were up to par.

Wickett came to CCC because he was already connected with the school.

“My sister played basketball here and John Wade knows my dad. I felt comfortable coming here,”  Wickett said. “It was the best basketball school around.”

Johnson said Wickett came to the team as a “jokester” who worked hard but didn’t take the game seriously.

Wickett’s mindset changed when he had his daughter La’Riyah Wickett, Johnson said.

“All you can do is help these students get where they want to get.”

Wickett grew as a player and a leader on this championship-winning Comet team.

“The biggest way I’ve grown is with my maturity and basketball IQ,” Wickett said.

He said as he matured his work ethic grew. The off season wasn’t just having free time anymore. He spent it working harder on his skills.

“I make better decisions on the court now, like identifying mismatches for me and my teammates, or making the right pass at the right time,” Wickett said.

As for his plans after Comet basketball, Wickett remains undecided on his future.

“I’ve thought about playing ball at a four-year university, I’ve gotten offers,” he said. “I want to focus most of my effort on raising my daughter.”

“I have achieved a lot here at CCC. I know I can play ball at a high level,” he said. “I don’t need to play anymore because I’m happy with what I’ve achieved.”