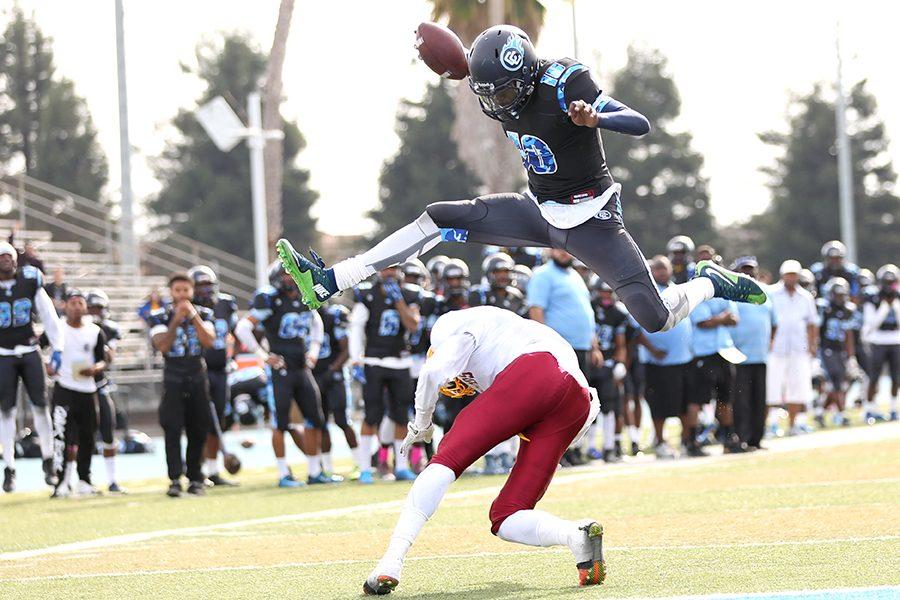 Comet quarterback Cameron Burston hurdles over Corsair defensive back Jacob Pluta and into the end zone for a touchdown during his team's 44-34 victory against the College of Redwoods at Comet Stadium at Contra Costa College in San Pablo, Calif. on Saturday, Oct. 24, 2015.

Riding the success of their 2014 one-loss season and successful bid in the Living Breath Foundation Bowl, the Comet football team found a way to maintain its winning ways posting a 9-2 record and returning to post-season action in the process in 2015.

With 24 players from the previous championship team moving on to Division I or II universities, youth and inexperience would be the toughest obstacle in the way of the Comets’ collective goal of repeating as champions.

“I feel we played above everyone’s expectations, even my own. We played more than 57 freshmen and you don’t find that on the junior college level,” coach Alonzo Carter said. “We had a lot of people who we didn’t know if they should even be playing, let alone starting. A lot of (the team’s success) had to do with the job that the entire coaching staff did this year.”

The youth movement of the team was apparent early as freshman quarterback Cameron Burston made his mark as a stabilizing force for the penalty-prone Comet squad.

He led the state in fewest interceptions for the majority of the year and ended up ranked first in the state in total yards and pass completion percentage.

The quarterback earned All-State honors and Carter took the Pac 7 Coach of the Year award.

“We shook up the system,” Burston said. “There hasn’t been a young team do what we did so early in a long time. We opened the eyes of a lot of people and solidified CCC as a destination for success.”

Picking up where they left off in 2014, the Comets outscored their opponents 51-15 in their first two games of the year. The team put up more than 30 points in its following two games, then notched a dominating 48-7 victory over intradistrict rival Los Medanos College.

By mid-season the Comets, who had been decisively beating their opponents, were faced with their first challenge of the season.

On the road in Marysville against Yuba College, CCC, which had not lost in more than a calendar year, found itself behind 13-10 with three minutes left to play.

The offense orchestrated a 10-play, 75-yard drive that culminated in a 19-yard Burston to receiver Malcolm Hale touchdown, effectively snatching victory from the jaws of defeat and beating the 49ers 16-13.

Two weeks later, CCC was handed the first of its two disappointing moments of the season. Shasta College’s All-State running back Connor Silveria got loose for 127 yards and three touchdowns and a Burston injury hurt the Comets’ chances for mounting a successful comeback in the game.

“There were a lot of up and downs this season compared to last year,” sophomore linebacker Chima Onyeukwu said.

The team quickly regained its composure in its final conference game of the year and beat San Jose City College 40-16 in San Jose.

In December, CCC returned to the Living Breath Foundation Bowl to, once again, battle Hartnell College. The Comets lost the contest 41-28.

“Even though the loss is disappointing, when you step back and look at it, I was really proud. Who knew that the success we had this season would lead to us moving up to a higher division (for the 2016 season),” Carter said. “Having a core of 30-35 guys returning will pay big dividends going forward.”

As a follow up to earning four straight bowl appearances, the Comet football team will move up to the National Bay 6 Conference this fall to battle powerhouses like City College of San Francisco, Santa Rosa Junior College and cross-county and intradistrict rival Diablo Valley College.

“This year we taught the young guys how the program works and how to focus in the classroom,” San Diego State University-bound defensive lineman Onyeukwu said. “They should be OK.”