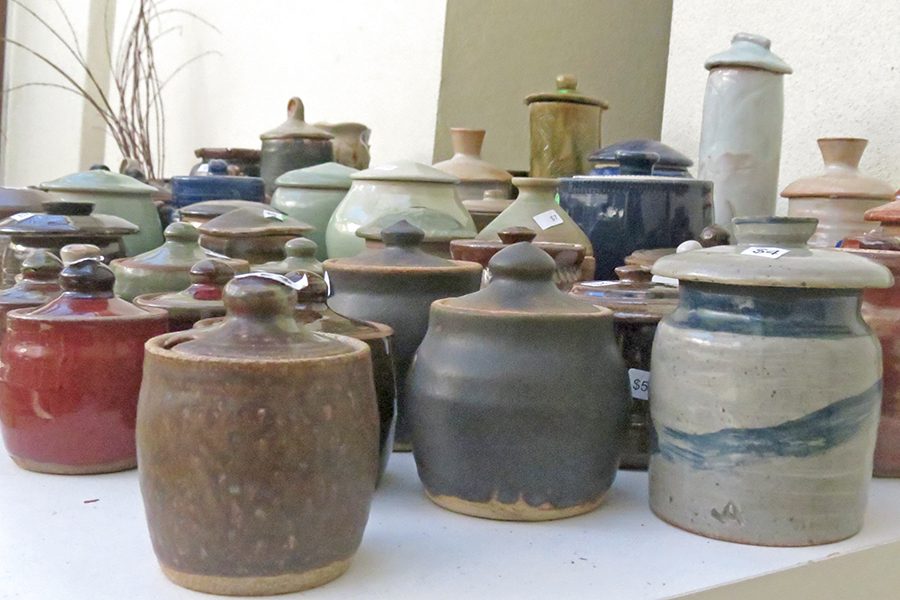 Student-made ceramics sit waiting to be purchased last week at the annual Pottery Event in the Art Building. All funds collected from the art sale go toward funding the fine and media arts department.

Jaijun Lu, who earned his art degree in Japan and built the sculpture that stands out in front of the Computer Technology Center, described the annual Pottery Event as a “tradition here at CCC.”

The five-day event, which ended last week, proved to be successful once again this year.

Each student burns through at least $24 worth of clay per semester, so to balance it out, the department holds two art fundraisers every year.

The glazed material they put on the bowls and ceramics costs an additional $4-$5 per student, Lu said.

He said he enjoys teaching art.

“Teaching is enjoyable because you’re working with creative people who love art. It’s fun and rewarding. At the end of the semester, students give presentations on their best items. You can see lots of beautiful work (here at the Pottery Event).”

There were about 25 students per class, who volunteered to sell their artwork. The way the art department had it all organized, was that the students put their names on a calendar specifying which days and times they could volunteer at the art fundraiser.

Also working the event was Mary Law, who has been teaching art at CCC for about 20 years.

“I enjoy the students here, and I enjoy people who are excited about learning. I’m a potter in Berkeley, and I like the balance of solitary and social life,” Law said.

Her art background goes back to when she studied in North Carolina at Penland School of Crafts, which eventually led to an apprenticeship.

Then she started teaching and got her master’s degree in fine arts, with an emphasis in ceramics.

She described the therapeutic value of art as well.

“There were times in life when it was my rock, and my situation was very helpful. I love making functional pots for people to use,” Law said.

There were three different areas that encompassed the event. The first was the glass casing in the Art Building lobby. This is where they kept  pieces that were auctioned off to the highest bidder.

The second area was outside in the Atrium where the products sold “as is” according to the listed price tags (ranging between $1-$10). The third area was in the hallway where pieces started around $20.

In the auction window, there were a few really nice pot-holder pieces that had “Star Wars” characters engraved into them. Additionally, in the outside area, most of the pieces were mugs, tea kettles, plates or bowls.

By Thursday, there were still a good amount of pieces that hadn’t sold yet.

“I thought more people would show up,” art student Trevor Koskela said. “I thought it would all be gone by now. I think this is good though, because it supports the teachers. I decided not to put mine out. It’s my first year and I feel like everything is so valuable.”

But the art event was not only for students to display their art, but for faculty as well. Both Lu and Law had a few of their own pieces on display. Lu had a pottery piece of a woman leaning on her elbow, and Law a tea pot, a house pot and a cheese cloche.

Another student who was volunteering said she made a bunch of pieces during the semester, but found it hard to part with them.

“My parents like it when I keep my work and not sell it or give it away,” art major Susan Mireles said.