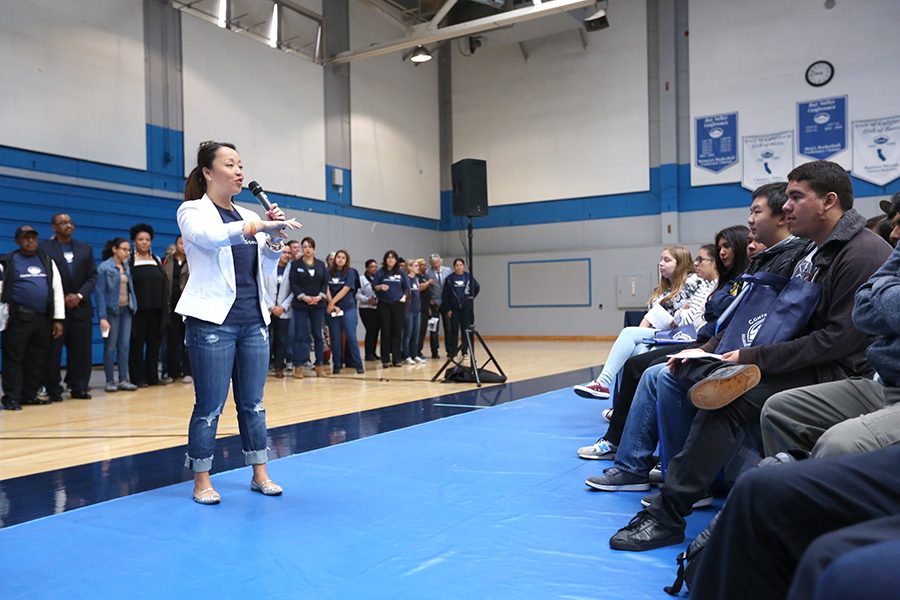 Super Saturday, held for the third year in a row, was provided with the intent to prepare incoming freshmen for their time at Contra Costa College.

Held in the Gymnasium from 8 a.m. to noon Saturday, the event was well attended with a large number of people showing up at 8 a.m. sharp, President Mojdeh Mehdizadeh said.

Dean of Student Services Vicki Ferguson said all hands were on deck for the Resource Fair. There were many people involved to pull off something of this magnitude and for things to go smoothly.

Tables representing 28 college programs in total were set up around half the perimeter of the Gym, each with representatives of college organizations, resources and departments.

This created awareness of what the college has to offer and also allowed for clubs to recruit members. It is a chance to get new board members, Society of Hispanic Professional Engineers member Valeria Avila said.

Representatives at each of the tables were armed with handouts and pamphlets with information about their programs for inquiring students.

Many in the college community volunteered and were doing what they love and are focused on serving the needs of West Contra Costa County, Mehdizadeh said.

Some took a more interactive approach than just speaking to the students.

The Library and Learning Resource Center representatives gave out candy and small prizes to those who participated in the Library question game.

The automotive services department folks allowed students to get a feel of their classes and what they teach. There was virtual car painting to demonstrate the skills in the repair and collision class. New clubs, such as the Per Ankh Academy, which will be launching in the fall, were able to make their first appearance to students.

“It makes a difference to come talk to people. It gives you a better sense what is offered,” Mehdizadeh said.

Students crowded the tables and talked with faculty and current students and asked questions.

Incoming freshman Ilianna Andradi said it was great and hands on, and everyone was nice and genuinely interested in answering her questions.

The event allowed for students to witness and learn firsthand about the campus rather than shying away from it due to things they may have heard.

It’s important and lets students actually see what CCC has to offer rather than hearing negatively of it, student Almas Ami said.

The viewing was suddenly stopped and everyone’s attention was directed toward a small dance performance done by students.

After the performance, the welcoming and staff recognition began.

Translation headphones were available so that parents whose first language is Spanish could fully understand the information provided by the speakers.

Ferguson led the welcoming speech and Mehdizadeh spoke about her own experiences at a community college. “You can start here and go anywhere you want. Contra Costa College can help you get wherever you want to go,” Mehdizadeh said.

Vice President Tammeil Gilkerson took it as an opportunity to call up all faculty members present to the front of the audience and acknowledge their hard work and dedication. She said that they were some of the most incredible people she had ever worked with.