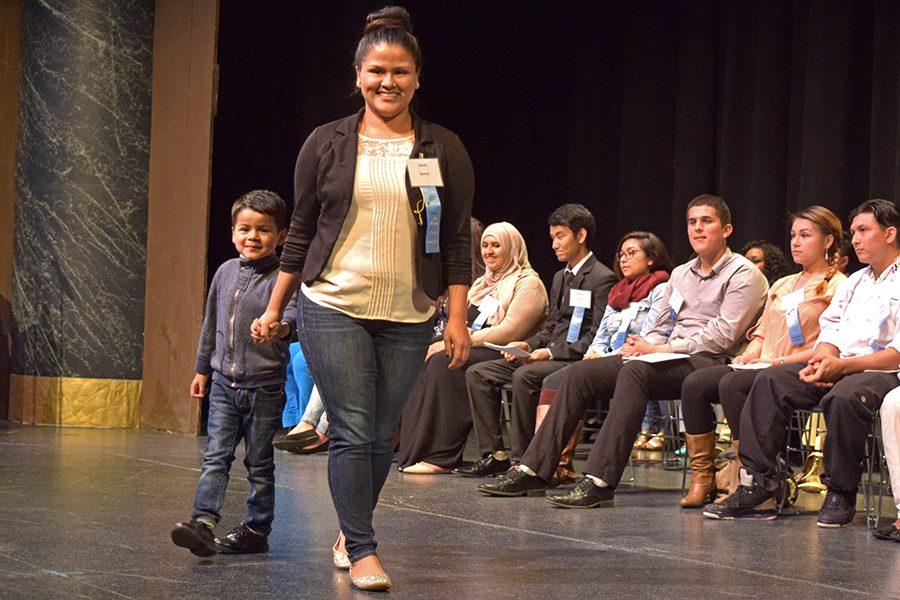 Karla Juarez walks across the stage accompanied by her son during the 57th Annual Scholarship Award Ceremony, hosted by the College Foundation Board, where recipients of scholarships and awards were honored in the Knox Center on May 4.

Award and scholarship recipients at Contra Costa College were honored at the 57th Annual Scholarship Awards Ceremony hosted by the College Foundation Board in the Knox Center on May 4.

Contra Costa College President Mojdeh Mehdizadeh said 78 scholarships and 48 awards were given out to 71 students at the ceremony. Some students received multiple scholarships.

Mehdizadeh said more than $200,000 was put into the hands of students this semester.

Foundation Secretary Bill Van Dyke said it is not easy for students to finish college with various problems that occur and family members who need to be taken care of. Van Dyke said the Foundation raises money to help alleviate the financial burden carried by CCC students who can apply and win scholarships or awards.

Executive Foundation Director Cindy Goga said 80-95 percent of the donations to the Foundation are from individuals who are passionate about education. Others are businesses, family members of students and members of the surrounding community.

Goga said the recipients should remember that CCC was the beginning of their higher educational path.

Garcia said she is glad to have the money to pay her first year’s tuition when she transfers to UC Berkeley in the fall because of the hard work she has done.

“I feel very empowered to (someday) come back to the community here and be an advocate for the higher education of CCC students,” she said.

Psychology major Jeilo Guana, the recipient of a $750 Foundation General Scholarship, the AGS Service Award of $250, the ASU Leadership Award of $1,000 and the Sy & Beverly Zell Scholarship of $1,000 said, “I feel ecstatic. These scholarships will keep me away from student loans and although the (scholarship application) process was very tedious, it was well worth it since I am able to support my little sister now.”

Mehdizadeh said the annual event wouldn’t be possible without the support of faculty who wrote letters of recommendation for students and helped them through the application process.

Student Services and Instruction Support Coordinator Charles Ramirez said this year the Financial Aid Office was given the responsibility to oversee the scholarship application and receipt process.

Over the previous two years, Foundation Office workers oversaw this process, working with students and faculty to advertise, collect and select the scholarship winners.

At the event, Beth Goehring, Academic Senate president, and Dean of Enrollment Services Dennis Franco presented the awards. As the students’ names were called, they were directed to walk to center stage to pose for a picture while receiving applause from the audience.

As film major Sakeema Payne, who received the African-American Staff Association Scholarship of $500 and the ASU Leadership Award of $1,000, walked across the stage to receive her certificates, speech major Alfonso Ramirez was part of the audience clapping for Payne.

Ramirez said he was happy to show support for Payne.