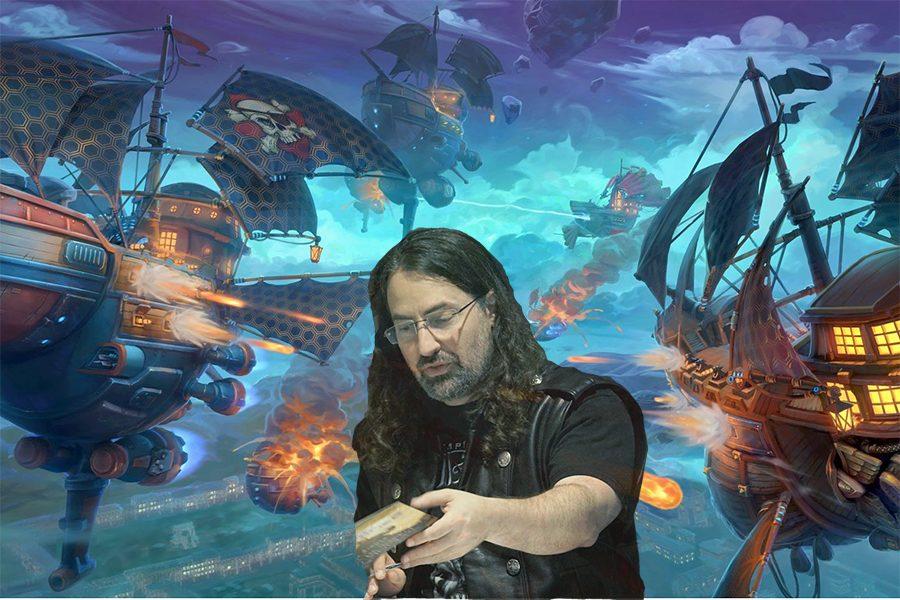 Beautiful, and not nearly long enough for its bountiful story, “The Aeronaut’s Windlass” aggravates me, and I demand more.

The world is built superbly. It is very alien to our own, but never disorienting. It’s not like our world, but it’s home for its characters. It feels solid and lived-in.

The land is drowned in mist, and humanity survives, huddled in vast spires, rising high above the clouds, and above the deadly creatures of the surface. Each spire is a self-contained nation dependent on the service of armadas of airships, held aloft by etheric crystal technology. Humanity is not united and tension is high between Spire Albion, where the story is set, and its rival, Spire Aurora. Somewhere in this mist-shrouded world an ancient enemy of humanity is stirring.

This new “Cinder Spires” series has no relation to either of Jim Butcher’s other series, either in theme or style. It’s a steampunk-ish setting, but deviates from the genre. The story is told from the perspective of various characters instead of focusing on the life of just one, so it bears more resemblance to Butcher’s “Codex Alera” than his flagship “Dresden Files” series.

The book has its flaws (and I will come to them), but what eclipses every complaint I have are Captain Francis Madison Grimm and the AMS Predator. Grimm shines throughout. His history and past companions are sprinkled tantalizingly through the book, while his current actions remain the focus. He is at his best under pressure and nearly every scene he’s in is riveting.

I adored his interactions with past friends and foes, like the deliciously obnoxious Captain Ransom and her ship Mistshark.

The true showstoppers of the book are the ship battles. I keep going back to read them again, and I genuinely think the entire book could have been set on the Predator. The final battle deserves some kind of award. An animated movie based on it would be stunning. Wandering around on Spire Albion just bogged the story down — more ship action please!

As usual, Butcher makes detail count. Every named character has a distinct personality. Even characters that are only mentioned briefly are distinctive enough to make me ache to know more about them.

Predator’s crew is too good. The bad-tempered engineer Journeyman is wonderful, stuck-up Commander Creedy grows on you, and mister Kettle, the experienced sailor, feels comfortingly reliable. I cared more when mister Stern, a minor character from the crew, got hurt than when any of the main trio almost died.

Now we come to it. The book’s single letdown is that trio of characters — Gwendolyn Lancaster, Benedict Sorellin and Bridget Tagwynn — are dull. They just seem to bumble through the world, reactively. They never make the world dance to their tune and I don’t feel much attachment to them. They’re not awful, just unexciting, which makes them stand out in the otherwise sparkling cast.

The first big scene that is built up for Bridget and the others to show their mettle gets abruptly canceled and leads into a bit where Captain Grimm saves the day. Then in a fight against minor characters they get upstaged by every other named character in the scene.

Benedict remains static throughout. For good or ill, he never has a moment where he stands out. Unlike his two companions he never bored me, perhaps because the story is never told from his perspective. In retrospect, I’m not sure he is a main character.

Gwendolyn and Bridget’s best moments come from interactions with other, better characters. In Bridget’s case it is getting to know Folly the etherialist, For Gwendolyn it is a talk near the end with Captain Grimm, and earlier when she and Journeyman get technical and carry out some maintenance on the Predator. Honestly, Predator should be counted as a main character. I love that ship and everything involving it.

Anyway, neither character is interesting in their own right, but at least they allow the best characters to shine brighter.

Folly’s presentation is odd, seeming at first like a side character, then growing to become a downright intriguing member of the main cast, despite having the least time dedicated to her of the main characters

The problem is that with all these great characters, like Folly, there just isn’t enough space left for the trio to grow. I think some essential parts got left out, and this book needed to be a third longer. Their personal history, the individual adversities they overcome and their relationships to each other are nothing I haven’t read before. I read an awful lot of fiction though, so someone less bookish might like them better. Maybe the story could have benefited if the trio were condensed into a single character, who meets the other two in the next book.

The last of the main cast is Rowl the cat. This world has intelligent cats, and this one is a fluffy terror. I can’t decide if I like him or not. His interactions with Bridget are charming enough, but he’s an obnoxious thing.

The larger plot of the series is still largely veiled, with just a couple of the Enemy’s pawns revealed, so far.

Jim-butcher.com says Butcher intends to finish the next “Dresden Files” book “Peace Talks” before he writes the sequel to “The Aeronaut’s Windlass,” so readers are doomed to starve for a while. Write faster Jim. I’m hungry.