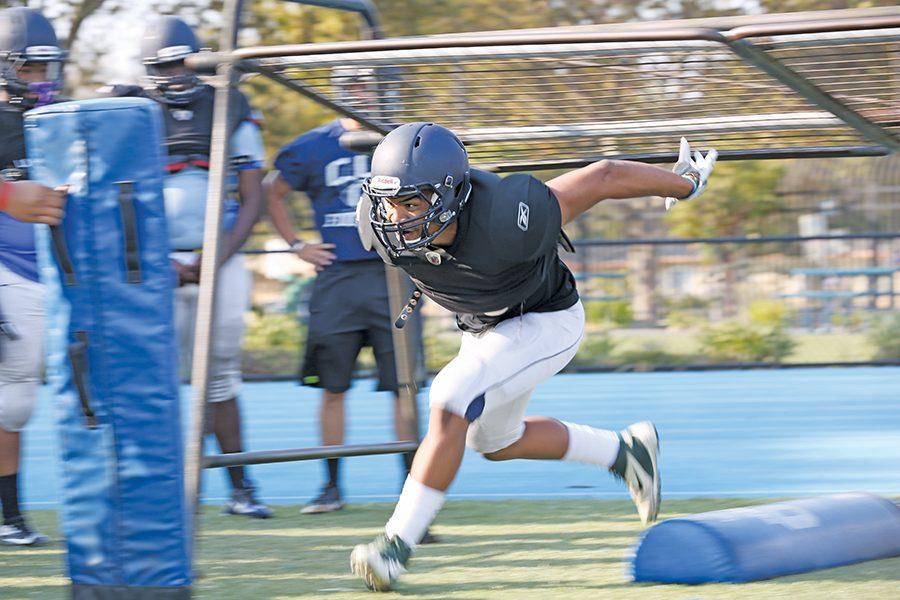 After moving to the Pacific 7 Conference in 2014, and 2015 and boasting a 19-3 record with two bowl game appearances (1-1), the Contra Costa College football team now takes another leap this season, moving to the vaunted National Bay 6 Conference.

There are three conferences in Northern California’s Division 1; the National Bay 6, National NorCal and the National Valley. Hayward’s Chabot College and Oakland’s Laney College are oddly in the Valley Conference with teams like Fresno City College and Modesto Junior College.

“We thought they would have put us with Laney and Chabot and that would have shifted one Valley team to the Bay 6, which is the tougher of the divisions,” Comet coach Alonzo Carter said. “We didn’t have any control of the situation. Someone had to move up and someone had to move down and the other teams were afraid to move into that conference.”

The Comets do play East Bay rival Laney in a home contest Oct. 1. It will be the team’s first night game of the year.

CCC has its only scrimmage game of the 2016 season Thursday at 6 p.m. against Los Medanos College in Pittsburg.

With stiffer competition ahead in 2016, Carter and his coaching staff recruited bigger bodies to fortify the interior of the defensive line. Multiple 300-pound linemen hope to clog the middle, giving Comet all-conference defensive end Mike Ihejeto a clearer path to the quarterback.

“I don’t expect anything but greatness,” Washington said. “I’ve got a good group of guys with me and we’re just working in the weight room to get bigger and stronger. We’ve already got the heart.”

Lavon Washington missed last season with a leg injury, but was instrumental on the Comets’ championship team of 2014.

“On the 2014 team we went into every game knowing that we were better than our opponents,” he said. “We have to believe that all of the hard work we put in is going to pay off.”

With so much of the offseason focus being geared toward the defense, the elephant in the room is Cal State-Fresno commit and First Team All-California quarterback Cameron Burston. The sophomore leads a high-powered offense that also features sophomore running back Harris Ross.

Five of the Comets’ top offensive players last year went on to play at the four-year universities.

“Last year was good, but now there is a better atmosphere and more organization. That’s what’s going to make this team great,” Ross said.

The Comets are confident they will be competitive in the Bay 6 touting a quarterback in his second year in the same offense. That provides comfort for the offense and coaches who have a veteran leader with a better grasp of the system.

Any trepidation going into the season can be attributed to the youthful offensive line.

The team is built to be a defensively athletic unit that looks to set up its offense by winning the battle for field position.

Moving to the Bay 6 raises the competition level, so every week the games will be similar to the most explosive competition CCC faced over the past few seasons.

“It’s a 10-week grind. Players are a reflection of their coach, and they need to accept this challenge and embrace it. They need to know what they are walking into,” Carter said. “The (conference) move was political. I think they expect us to fail, and it’s fueled me for the past nine months.”