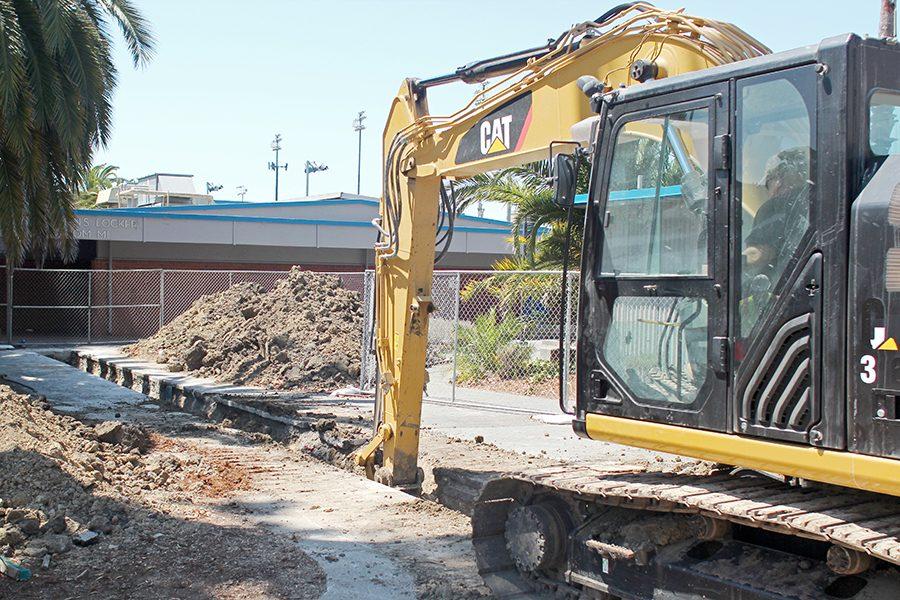 A construction worker with Kleinfelder, Inc. digs out dirt inside a 15-foot trench in Lot 6 in front of the Gymnasium on Aug. 16.

Lot 6, the student parking lot in front of the Gymnasium, is undergoing seismic trenching to approve Lot 4 as a possible site for a new Police Services Building.

Contra Costa College Buildings and Grounds Manager Bruce King said the seismic study in Lot 6 is one of three seismic trench surveys to detect any movement along the Hayward Fault, an active fault line, where it bisects campus.

“Half of the parking spots in Lot 6 are gone now,” King said. “But they will reopen in October. We will close a smaller section, four to eight parking spots, when trenching in Lot 1 starts (in October).”

District Facilities Planner Ray Pyle said because the Hayward Fault cuts right through the CCC campus, any proposed construction sites within 2,000 feet of the active fault require extensive seismic study to comply with the Alquist Priolo Zoning Act of 1972 before construction can begin.

Pyle said the three trenches cost $477,000, and like the $2 million construction cost of the new Police Services Building, the funds will come out of the district’s portion of the Measure E (2014) bond.

Police Services Lt. Tom Holt said the trenches in Lot 6 and 1 were added to the project once recently hired Chief Edward Carney suggested a different location to construct the Police Services Building other than at the site of the college Handball or Tennis courts at a meeting with college leadership in April.

“If there is no fault activity (at the site), we want to put the (Police Services) building in Lot 4,” Holt said. “It is the ideal spot because its located at the front of the campus, so it’s visible, and it’s at a central location on campus making it easier for officers to get around.”

Carney said the idea to survey another area near the Gymnasium came from a drive to ensure that people on campus feel that police officers are part of the community.

“Initially the concept was to keep the building out of sight and out of mind, so when folks who have to go to the building they are not hesitant,” he said. “But I was uncomfortable with the idea of being too out of the way near the Handball Courts or Tennis Courts. Our drive today is to be part of this community, to reach out and let people know we are here.”

King said the trenching in Lot 6 should be finished by the end of September and then excavation will begin in Lot 1.

He said Lot 4, where the empty Critical Solutions (construction firm) offices were set up for the past three years, sits in between these two seismic trenches.

Pyle said Kleinfelder Inc., an engineering consultant firm, plans to have the trench in Lot 1 completed sometime in December.

“The currently (open) trench (in Lot 6) should be done by mid- to late-September, and the last one (in Lot 1) by early November,” Pyle said. “The results and findings of the fault trace analysis should be in by the end of the (fall semester).”

King said that no decision could be made about the exact location of the new Police Services Building until the seismic analysis shows that the soil under the possible building sites, which are Lot 4, the Handball Courts or part of the Tennis Courts, is not shifting.

“Yellow zones can be turned into green zones through extensive drilling (and seismic study), but you cannot change the status of a red zone,” Mehdizadeh said.

King said it should take Kleinfelder about 10 weeks after the Lot 1 study is complete for the results to be sent to the District Office.

“Ten weeks after (Kleinfelder) finishes, they will determine whether the area is green, red or yellow,” he said. “But we can only move forward if it is a green zone.”

Carney said he also suggested further trenching farther away from the athletic department so that the placement of the Police Services Building does not interfere with future projects.

“I don’t want to put the (Police Services) building in a location where someday someone will regret we did that,” Carney said. “As times change, needs change. Assume they want to enlarge the Gymnasium, physical education area, or other projects we are not aware of yet. Wherever we put the building is permanent. We don’t want to regret the location we choose.”

The current Police Services building is a portable built in the 1967 according to the district’s 2016-17 Building Summary Report. It is located right next to Building and Grounds on the east side of campus.

“It’s a little run down,” Holt said, talking about the locker room area and holding cells in the current building, “And the sign on the (current) building is not big enough for people to find us.

“The location is not bad, but it’s the building itself that is not great.”

Carney agrees with Holt. He said that the current building does not meet the needs of police officers on campus and could be a detriment to campus safety.

“The officers certainly need more modern and larger accommodations,” he said. “Right now police officers at CCC are working in an out-of-date facility not suited for police operations. The new building will incorporate modern technology and provide sufficient room for officers to do their jobs.

He said the new one story one story will provide modern briefing rooms, storage and holding cells that “we just don’t have now.”

Carney said, “Worker satisfaction is extremely important. The campus safety aspect is in large part dependent on the willingness of officers to be part of the community. In campus law enforcement it is far more important that officers create good relations with each other and keep contact with the community.