Team returns to action after season of shame, dishonor 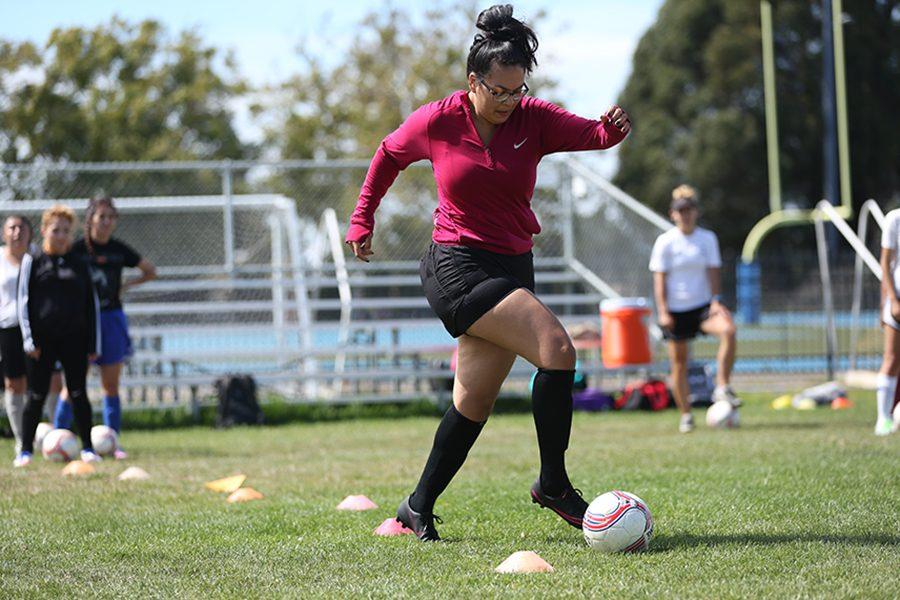 Administration of justice major Ingrid Gonzalez dribbles through cones during soccer practice at the Soccer Field on Monday.

The women’s soccer team is preparing for the start of the 2016 fall semester after it forfeited the entire 2015 season under its former coach because it did not have enough players to field a team.

The only returning Comet from last year, defender Mary Sanchez, said she is “excited and motivated” to finally play a full season of soccer for Contra Costa College.

The first game of the season is at Skyline College on Friday. One could hear the eagerness in her voice when she mentioned her plans for this season.

“Our goal for this season is to actually play a full season and have that experience of being in a routine,” Sanchez said.

First-year women’s soccer coach Brittany Castillo admitted that the women’s soccer team at CCC has had “an issue” in the past with putting a team together.

Sanchez said, “Coach (Castillo) has been working hard on getting a solid group of girls who are hard-working and are ready to dedicate themselves to the team.”

Castillo said her goals for this season are to “get the group of girls on course academically and get them to a four-year university.”

“It is all about setting a realistic tone and expectation for the athletes so they know what they are getting into,” she said.

CCC student Nataly Rendon said that she would be more attracted to playing soccer at the school if provided some kind of “beginners’ camp” for soccer.

“It would help people like me who do not play learn the basics of soccer,” Rendon said.

“The benefits of playing for the women’s soccer team are endless,” Castillo said. “Having a counselor that is dedicated to the team will help you throughout your career at CCC. Things like early registration, team bonding and building personal relationships are a few of the many benefits of playing.”

Sanchez praised coach Castillo on the “dedication and hard work” that she’s put into the women’s soccer team.

“(Castillo) wants the best for everyone and she is passionate and committed to us,” she said.

The women’s soccer team is preparing for a season full of obstacles, expectations and, most importantly, the task of bringing the program back into relevance under a new coach.