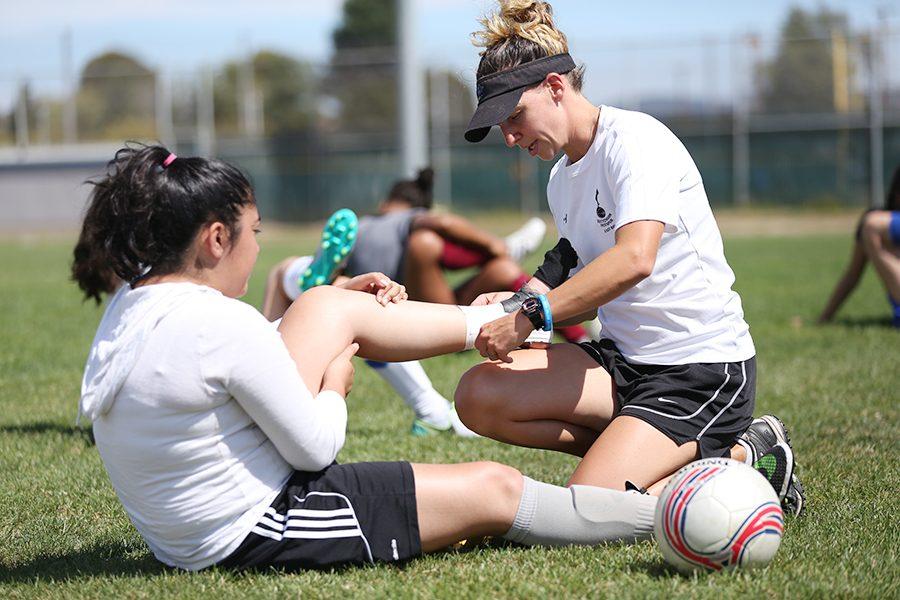 After an abysmal showing in its previous two seasons, netting just one win in 2014 and forfeiting the entire season after one game in 2015, the women’s soccer team has plotted a fresh course starting with newly hired coach Brittany Castillo.

After former coach Amanda Beckenhauer walked away from her coaching duties following the collapse of the 2015 season, Athletic Director John Wade was handed an opportunity to shift the program onto a different heading.

“(Castillo) was always feisty, even when she was here as a player. I’m kicking myself because I didn’t consider her sooner,” Wade said. “She doesn’t take ‘no’ for an answer and her ability to work through adversity is what makes her stand out. She’s a good fit.”

Castillo was an all-conference player for the Comets women’s soccer program, earning first team honors in 2001 and 2002.

She earned an selection to the Sophomore Bowl in 2002, and she also played on the Comet softball team while she completed her lower division academic work at Contra Costa College.

“No doubt there is history here at CCC. Its outreach to the community, the family atmosphere and caring — absolutely.” Castillo said. “I live in Fairfield, so I could have taught at Solano, but I would rather drive right past that campus to come here because of the pride that I have for CCC.”

As a Bay Area native, Castillo’s soccer pedigree stretches far beyond her playing days for the Comets.

Post CCC, Castillo achieved her bachelor of arts from San Francisco State and competed on its soccer team in 2005. She coached high school soccer for two years at Hercules High before returning to SF State to pursue her master’s degree, which she earned in 2010.

Castillo also played for the Tottenham Hotspurs, a soccer program that is an extension of an English Premier League club located in the Bay Area for more than 25 years.

Her playing and coaching experience led her to an assistant coaching position for UC Berkeley women’s soccer club for two seasons.

Club sports, at the university level, are offered by colleges that compete with other college teams but whose games do not fall under National Collegiate Athletic Association jurisdiction (NCAA).

These teams are typically for athletes who want to participate at a higher level of competition, but do not have enough units to compete in NCAA level sports.

Coaching players who want to be here is one thing. However, following a dissolved season with a coach who all but set a dumpster fire in her wake is the epitome of changing a program in disarray.

Castillo has already begun taking steps to turn the program around.

Upon arrival, the coach met with Student Life officials to ensure a booth for Club Rush which garnered the attention of some of the many athletic prospects on campus.

“I wanted to represent the program,” Castillo said. “I wanted to get out there and make myself approachable and let the girls who did sign up know my expectations of them.”

Aside from a larger presence on campus, practice for the women’s soccer team now looks a lot different than it did during these last two years.

The culture shift is similar to what happened after Brian Guinn replaced Marvin Webb as coach of the Comet baseball team prior to last season.

Practices are crisper, as more regimented players build on in-game skill sets while continuing to focus on the fundamentals of the game.

Cardio training has also been more of a focus, as a portion of each practice is dedicated to running suicides and taking laps around the football field.

Student-athletes have already begun to buy into Castillo’s system.

“I think (Castillo) is awesome. She is a cool person and she teaches us a lot of information without overloading us,” freshman Comet forward Dontella Stanley said. “She is the best coach I’ve had since high school.”

As a coach Castillo knows the first thing she wants from her team — commitment. But the real work goes on off the playing field.

“I want to be as involved as I can. I want to make sure I help them academically because that’s the real reason they are here,” Castillo said.