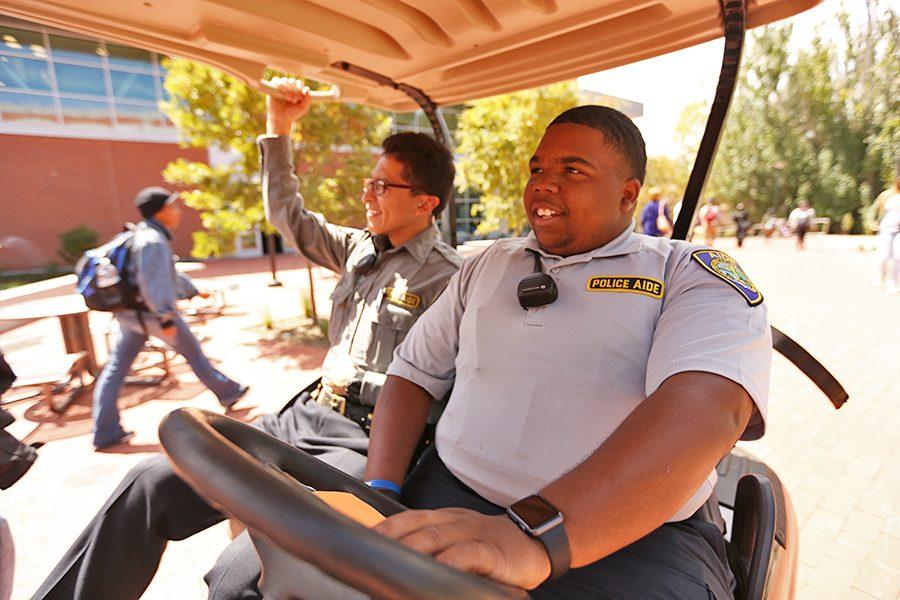 Police aides will be wearing new uniforms this semester thanks to a grant awarded by the Associated Students Union.

The ASU at Contra Costa College awarded the Police Services a grant of $2,500 to purchase uniforms after police aide Daquan Jackson applied for the grant early last spring.

“(Jackson) managed basically the whole thing,” Holt said. “He carried it on his back. I just kind of oversaw it a little bit, but he picked out the shirts, he managed the money, he bought all the equipment. He basically did it all on his own.”

The new uniforms came as a relief since the police aides’ old uniforms were outdated and not as efficient while on duty.

Jackson said the new short-sleeve polo shirts are lighter in weight yet keep the professional look of the last design. The new police aide belts are similar to police officers’ belts that provide more flexibility, comfort and more tactical storage while on duty.

He said, “Our updated uniform pants now include cargo pockets for extra storage.”

The ASU’s Grant for Support provides 10 grants up to $2,500 every year to groups on campus, who may be in need of financial support, for students and student projects.

The process includes filling out the application and presenting a claim before the ASU Board. The board was clearly impressed with the effort Jackson and his team put into the presentation. Lt. Holt said, “I wouldn’t say the process is easy, but with (Jackson) doing the work and (former Student Life Coordinator Erika Greene) helping him, he made it seem easy.”

Greene was the one responsible for signing the grant before sending it off to the Business Office for the final approval.

“I had no problem signing the paperwork because of the work that had gone into it from (Jackson), the police aides and Police Services all together,” she said. “On top of that, they had the invoices together, turned the application on time and really answered questions from the ASU Board.

“It was something necessary to make the police aides more visible (on campus). It helps let (people) know who the aides are, and who the police officers are.”

It bought them up to a more modern age, in terms of the uniform and how they present themselves.”

“(Jackson) would come in and ask questions,” she said. “He asked what details are necessary for the grant. He kept in touch and kept us a part of his process, and that just shows what kind of leader he is. In terms of law enforcement, people like him are a plus.”