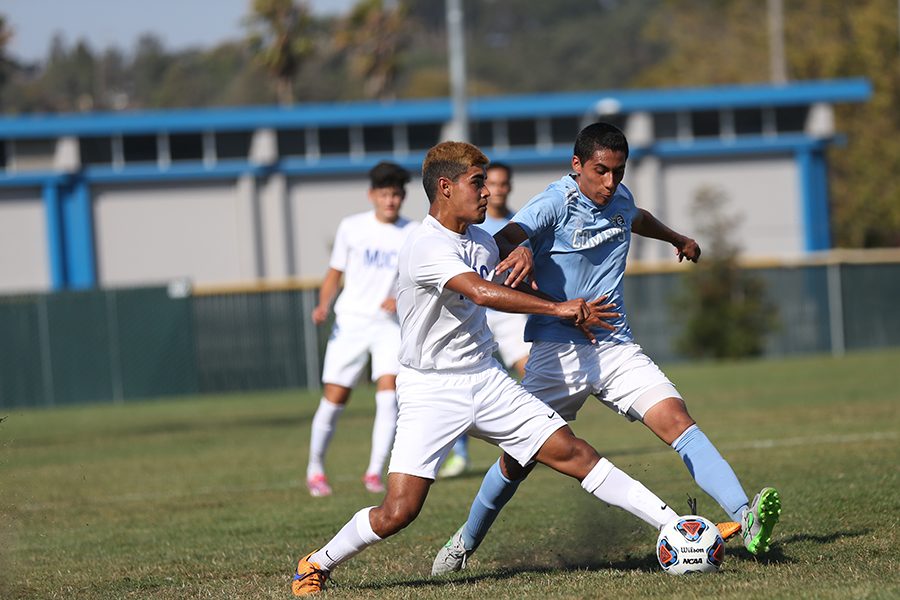 After an uncertain start to the season on the road, the 2015 men’s soccer Bay Valley Conference champions beat Modesto Junior College 3-1 at the Soccer Field in its home opener on Sept. 6.

This result came as a  surprise for Contra Costa College (3-2 overall) because in its non-conference game against the Pirates (0-1-2 overall) last year it lost 6-1 in an embarrassing fashion.

Comet sophomore defender Edgar Yepes said, “(The Pirates) really walked over us last year and that has been stuck in my head ever since.”

The Pirates did have their fair share of chances in the first half hour of the game, but failed to finish those opportunities.

“Contra Costa College finished off opportunities it got to score,” Modesto coach Sebastian Gutierrez said. “And unfortunately we did not.”

The 0-0 deadlock was broken by Comet forward Jahrie Gray with eight minutes left to play in the first half.

At minute 37, Gray finished a sweet chip through pass by Comet midfielder Jordan Fletchero from 8 yards out from the far post.

Comet coach Nikki Ferguson said, “We struggled to settle into the game in the first half but I thought we did well.”

After halftime CCC continued to add pressure on Modesto and started to gain more possession of the ball.

Ten minutes into the second half CCC’s high press paid off when striker Christian Geronimo capitalized on a Pirate turnover in their defensive third of the field.

Geromimo smashed an insane strike from an incredibly tight angle just before the ball rolled past the end line.

With 28 minutes left to play, Fletchero finished an easy open goal shot after an error by Modesto goalkeeper Drew Graver.

Ferguson said, “In the second half we played much better. We settled in and fortunately found the net a couple of more times.”

Modesto began to build more attacks at minute 75, but the Comets still asserted control in possession and surgical passes.

Finally, with five minutes left before the end of the game, Modesto midfielder Issac Vazquez capitalized on a Comet defensive error and made a shot that hit the crossbar, bounced in, and then out of the goal for the Pirates’ only goal.