Let there be greed 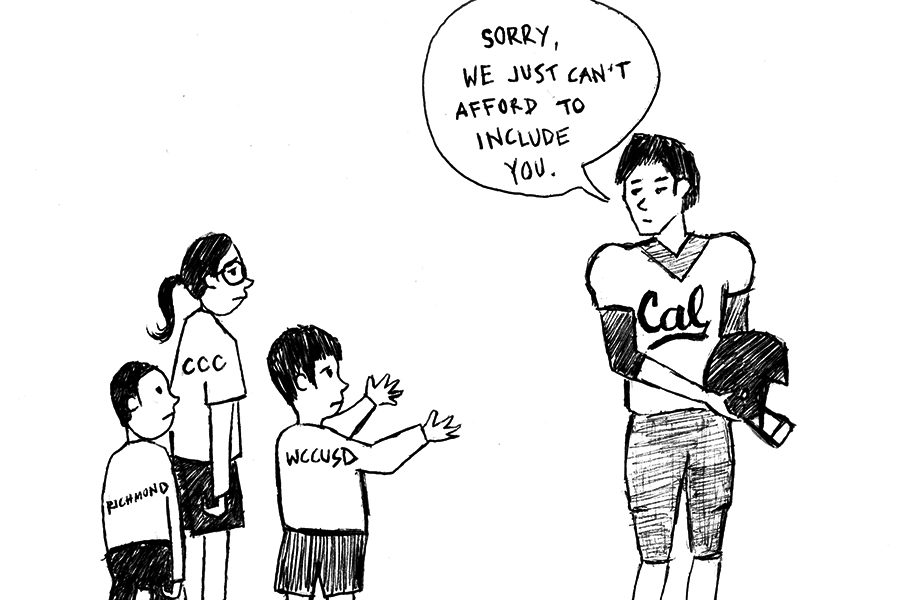 While many argue that the suspension of UC Berkeley’s $3 billion Global Research Campus Project (GC) in Richmond is just a hiccup in the master plan to inject a research industry into the city, others insist it is the end of a vision.

The decision made by UC Berkeley Chancellor Nicholas Dirks, due to a $150 million budget deficit at Cal, comes at a disastrous time for the university. But the victims of the indefinite suspension of the project are high school and community college students in West Contra Costa County.

Rather than invest into a low-income community to transform it into a global beacon for research work in environmental, health and medical science, UC Berkeley and UCLA spend billions of dollars to recruit a brigade of administrators and coaches.

According to tranparentcalifornia.com, in 2014 the UC system, at its 11 campuses, spent about $11 billion in base pay for all employees, $2.7 billion in benefits, $1.5 billion in “other pay” and about $17 million for overtime.

The institution spent about $15.4 billion in total employee costs. But the median, center of the data, total pay and benefits for an employee at UC system in 2014 was about $28,555.

It is unfair that the UC system cannot find funding for this project, yet UCLA football coach Jim Mora and basketball coach Steve Alford were the highest paid employees statewide in 2014.

Even more concerning is the fact that Mora and Alford made $3.5 million and $2.7 million respectively, while Chancellor Dirks made $574,072.

While UC Berkeley may not be the worst offender in terms of overpaid staff, it does have the highest ratio of administrators to professors in the UC system. From 2005 to 2015 the number of full-time administrators at the university swelled by 56 percent — from 821 to 1,281. Over that time period full-time faculty only increased 1,261 to 1,285 — or nearly 2 percent.

The decision to suspend the Global Campus in Richmond helps support that insatiable greed. As a result, a large and diverse group of students interested in science won’t have a facility in their hometown.

Just imagine having a thriving community of problem-solvers of the world’s most daunting challenges less than five miles away from Contra Costa College and two miles away from some Richmond high schools.

But, CCC Vice President Tammeil Gilkerson said, this is a project that was still 40 years from completion — before it was put on hold on Aug. 26. While the project is in limbo there is reason to be optimistic. Gilkerson said negotiations between CCC, the City of Richmond, WCCUSD, UC Berkeley and  the Lawrence-Berkeley National Lab will set project guidelines.

Blame as to why GC won’t be finished any time soon has been cast on lengthy negotiations, Dirks’ leadership abilities and the mired UC Berkeley funding procurement process.

But the university did not just shoot itself in the foot. The bullet ricocheted and crippled a project that could have transformed the East Bay community, and the world.