Last building in project opens for college use 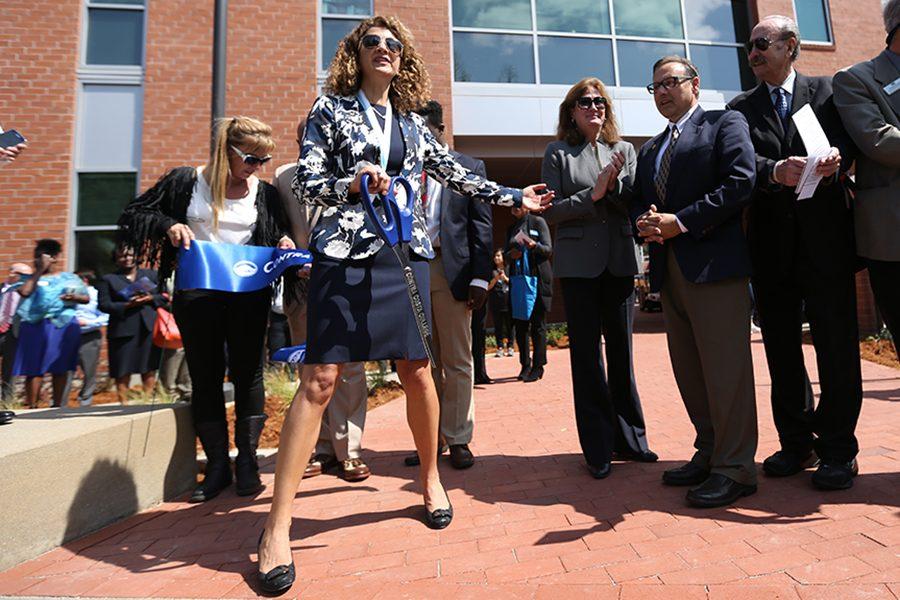 A treasured community member’s investiture brought nearly 200 people to campus for the official ribbon cutting ceremony for the Campus Center and Classroom Project.

Contra Costa College President Mojdeh Mehdizadeh was honored by staff, students and community members during the ribbon cutting ceremony for the Fireside Hall Building on Sept. 13 at 11 a.m.

“Oh happy day,” district Chancellor Helen Benjamin said. “I am so excited to honor our college president and celebrate the opening of the Fireside Hall.”

The Governing Board appointed Mehdizadeh as the college president on March 23 after she had already spent nearly two years as the interim president at CCC.

“It is my pleasure and my honor to bestow this medallion to the 12th permanent president of Contra Costa College,” Benjamin said.

During the investiture, Benjamin provided attendees gathered in the amphitheater, nestled in between the Student and Administration Building and Rheem Creek, with background information on Mehdizadeh’s history within the local community.

Benjamin said Mehdizadeh became part of the Contra Costa Community College District at the age of 17 when she first began attending Diablo Valley College, and has remained part of it for 25 years.

“I have spent 63 percent of my life being a part of the Contra Costa (district) community — I am honored to be your president,” Mehdizadeh said.

To break up the formality of the investiture ceremony, some CCC representatives started dancing.

CCC Vice President Tammeil Gilkerson said, “(Mehdizadeh’s) investment in the college puts us at ease for the future — we want to demonstrate our support CCC style.”

“This day could not be possible without the passage of our bond measure,” Benjamin said.

Over $200,000 was raised by the district to campaign for Bond Measure A (2006) and over $72 million was invested from that bond measure in the development and construction of the Campus Center and Classroom Project.

The finished buildings were as much a part of the ceremony as Mehdizadeh’s presidential affirmation.

CCC alumnus and retired state legislator Robert Campbell said, “When I came to CCC in 1956 we had two quonset huts. In those huts we had drama class, woodshop and the place to eat. Have you ever tried to eat in a woodshop? You are fortunate to be here today. I am impressed with the campus and the leaders of the college.”

The ceremony continued with different district officials and community members giving their speeches and praise to the new buildings.

“The new facilities are beautiful,” the District Bond Oversight Committee Chairperson William Van Dyk said. “And they were completed on time and under budget.”

As the list of speakers reached its end, Mehdizadeh stood up to say thanks to all those that made it happen, TBP/Architecture Inc., Lathrop Construction, Interior Motions and all the other vendors involved with the Campus Center and Classroom Project.

As the investiture and ribbon cutting ceremony reached its end, a blue CCC ribbon and oversized scissors were brought out to Mehdizadeh to officially open Fireside Hall.