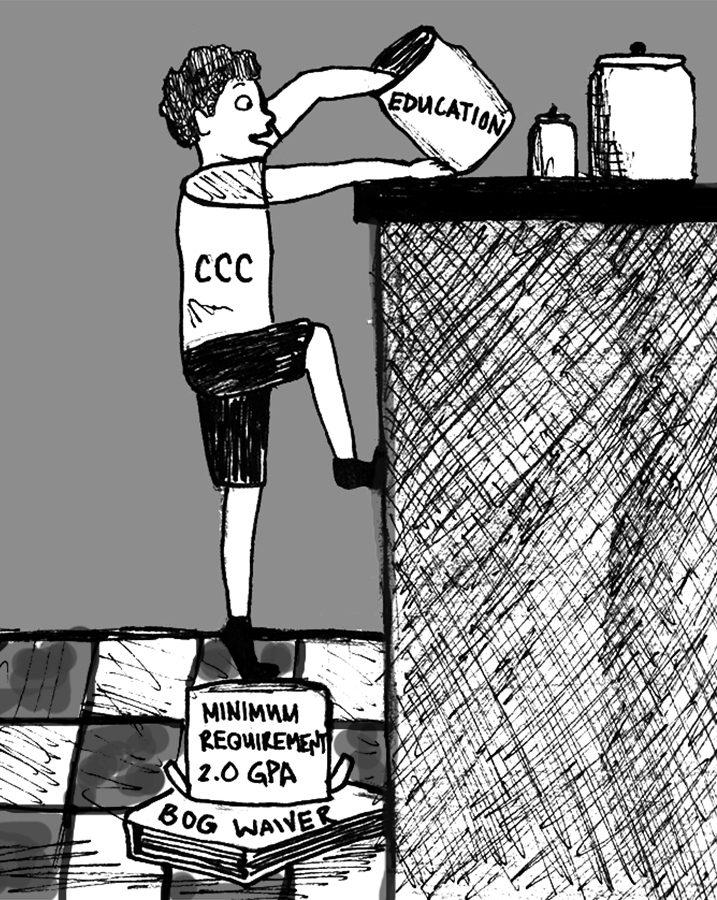 Adding a 2.0 GPA minimum requirement to a statewide financial aid program does increase the incentive for community college students to do well academically.

But it also puts more pressure on academic institutions throughout the state to develop programs that help students who fall below this requirement focus on school and keep their access to education.

The changes to the Board of Governors Fee Waiver are tied to the Student Success Act of 2012 and were put into effect at the start of the 2016 fall semester.

It is too early to tell if restrictions will help students succeed or just help the California Community College Chancellor’s Office save a significant amount of money by the end of the fiscal year June 30, 2017.

What is certain is that educators statewide had plenty of time to figure out which demographics of students need the most help. Failure to act upon these findings by the state could be disastrous.

Before, the BOG waiver would pay the unit cost for a student for an entire academic year depending on economic status, or financial need.

Now grade point averages must also be reviewed annually for continuing students. Those with a GPA above 2.0 are eligible to continue receiving the fee waiver.

“The intention coming from (the state of) California is to tighten up restrictions for student success and give incentive (to students),” Contra Costa College Financial Aid Office Supervisor Monica Rodriguez said.

Since the academic year 2009-10, CCC students have been awarded $21.8 million in BOG waivers, according to DataMart, the state Chancellor’s Office online database.

CCC has been working to target the demographic groups that struggle through the Student Success Initiative Equity Report.

The report tracked multiple cohorts of students who first enrolled into remedial math, English or English as a second language courses in 2009 through 2015.

Out of another group of 863 students were tracked for six years, beginning in 2009. Only about 60 percent enrolled in a math or English class during their first three years at CCC. About 43 percent of the tracked students completed a degree, certificate or transferred to a four-year university by 2015.

According to Retention/Success Summary report on datamart.cccco.edu, CCC’s transfer rate for 2015 fall semester was at 70 percent, nearly on par with the statewide transfer rate of 72 percent.

But CCC STEM Manager Mayra Padilla, who led the equity report study, said the average time it takes a CCC student to transfer to a four-year university is about six years.

Padilla said this startling statistic could be tied to groups of impoverished, first-generation college students who do not have the support or experience to understand how the educational system works.

Through this perspective, it is easy to understand why many minority students feel disenfranchised by the system.

According to the state’s databank, women of the targeted demographic groups use the BOG waiver more frequently than men. But according to CCC’s equity report, it is males here on campus who need the most help academically.

If we expect these academic restrictions for financial aid access to benefit students there must be a continuing dialog at the state, district and individual college levels to develop programs that will help these students overcome those restrictions instead of marginalizing entire groups of students.