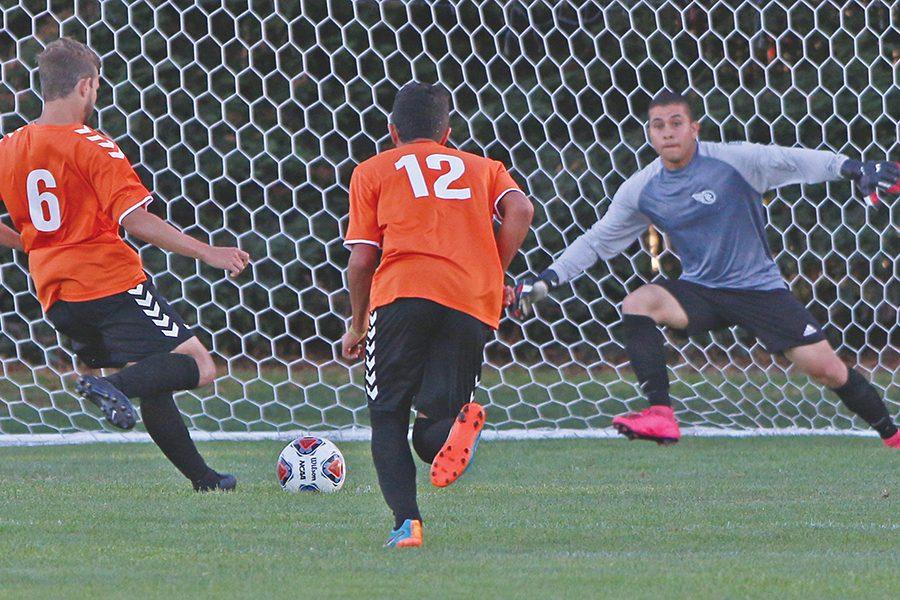 Cougar forward Carlos Cusatis (left) takes a penalty kick and sends it past Comet goalkeeper Eduardo Escamilla (right) for the game’s only goal during CCC’s 1-0 loss to Lassen College at the Soccer Field on Saturday.

One goal in a shutout loss against Lassen College sealed the Comet’s fourth consecutive defeat in non-conference play against some of the top 20 men’s soccer teams in Northern California.

Contra Costa College (4-6-1 overall) lost 1-0 after ceding a penalty kick against the Cougars (5-0-3 overall, ranked No. 4 in Northern California) 17 minutes into the game at the Soccer Field on Saturday.

Comet coach Nikki Ferguson said his mostly freshman team lost because it could not keep possession, create scoring chances or match the level of physicality of the Cougars until late in the second half.

“Our goalkeeper kept us in the game,” Ferguson said. “But we have to find ways to score goals for him.”

The Cougars outshot CCC 12-3. More than half of those shots were saved by Escamilla.

He tallied eight saves by the end of the game  — two of those shots were taken within 6 yards from goal.

In those two close range saves, at minute 40 and 85, Lassen forward Carlos Cusatis took the shots. But Cusatis’ game-winning shot from the penalty spot was enough to secure a win for Lassen on the road.

“I am happy we won, but it is frustrating knowing we could have scored three or five goals,” he said. “I had a lot of chances, but the goalkeeper stopped me. I tried to change my finish (each time) but he is a really good keeper.”

Escamilla said there was never a point that the Comets stopped trying to break through Lassen’s backline — even if that meant dropping back to cover the counter attack.

“It was never over for us. We always play our hearts out until the referee blows the whistle,” he said. “We were always fighting. Even though we didn’t score we were still in the game — we were alive.”

Lassen’s coach George Kee said he is proud of his team for getting a win on the road in a game that he expected a single goal difference, but was “impressed” by CCC’s level of play.

“Coming into the second half our game plan was to stay calm and get another early goal, but we were unable to do that because (the Comets defensive backs) closed down space,” Kee said. “And when we did break through (their backline) their goalkeeper made some huge saves to stay in the game.”

Ferguson said CCC will need to improve offensively before its first Bay Valley Conference game on Friday against Mendocino College (at the Soccer Field at 4 p.m.)

“If we want to make a run for playoffs, we need our players to realize the importance of doing the little things right. Our goalkeeper made a couple huge saves to keep us in the game, but we have to focus on possession, physicality and finishing,” he said. “We are going to have a target on our backs as last year’s BVC champions. But 90 percent of this team had nothing to do with winning the conference championship last season.”

Against Lassen, by the end of the half the Comets, ranked No. 9 in Northern California, were outshot 9-2 and committed six fouls to Lassen’s two.

The Cougars’ right back Oliver May said their style of possession play throughout the first half drained the Comets going into the second.

“We controlled the first half and had them chasing the ball.  As the game went on (the Comets) became more desperate to get in to score and would come forward more, but that left them exposed defensively so it became an end-to-end kind of match.”

At 16 minutes into the game, Lassen’s game-winning counter attack ended with Comet center back Edgar Yepes missing the ball and slamming into Rai Ramus at high speed in the penalty area.

“It started right here. In their (defensive) half,” Ferguson said immediately after the referee awarded the penalty kick. “Something so simple (like) challenging for possession cost us. We needed to challenge and deny them (in their half).”

The play started when Comet striker Christian Geronimo tried to volley a short pass out wide to Comet striker Jahrie Gray from center field, but the lobbed pass was intercepted by Benjamin Westfield.

Callaghan then sent a filtered through pass on the ground in between Comet center back Eduardo Torres and left back Jacob Daughtery to Ramus who was in full stride into the right side of the penalty area before Yepes drew the penalty kick.

CCC right back Francis Semilla said it was difficult to keep up with Lassen’s quick and organized offense as the game continued.

“(The Cougars’) plays were fast and were well structured. But I think we did a good job overall defending against their attack.”