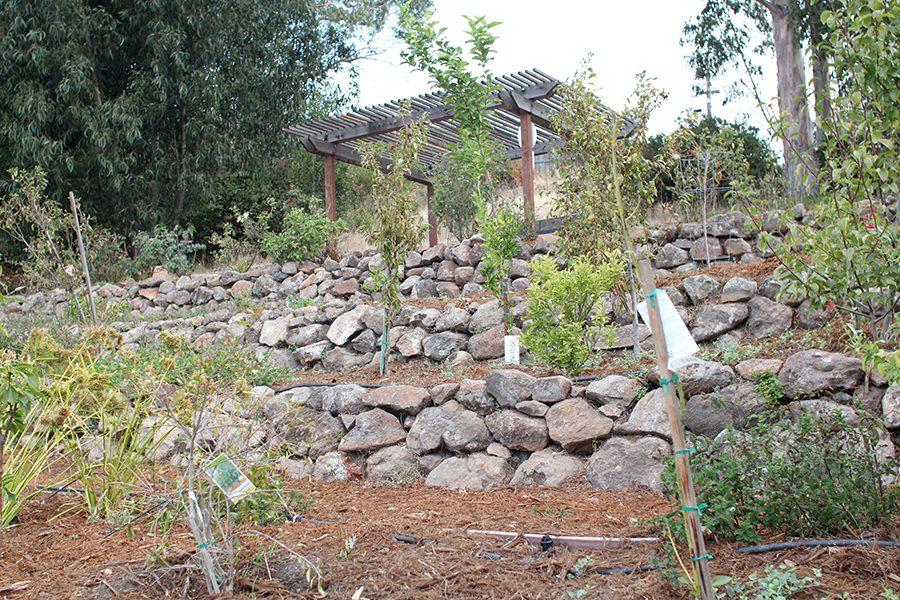 The culinary arts department plans to maximize its garden space near the Applied Arts Building to increase the variety of crops. The garden currently supplies Aqua Terra Grill and Pronto with roses for centerpieces and fresh herbs for meals.

The culinary arts department at Contra Costa College has one aspect that is overlooked by a lot of students but that contributes heavily to the day-to-day functioning of the kitchen: the garden behind the old Three Season’s restaurant.

The culinary garden is not only doing well, but thriving even better than when the Three Seasons still provided food to the students last spring.

“We have no plans to get rid of it, and I’d like to expand it if we can,” culinary arts department Chairperson Nader Sharkes said.

Sharkes said the department grows mainly vegetables, herbs and roses in the garden, and about 60 percent of their dishes contain fresh herbs and vegetables directly from the garden.

Additionally, the idea of growing fresh vegetables here on campus has whetted the appetite for discussion of healthy eating.

“I really have an appreciation for growing some of your own vegetables, and I prefer that because then you know there’s no GMOs and it’s healthier,” second semester culinary student Jamarei Whelan said.

Whelan said that the most common herbs the culinary department uses from the garden are basil and mint, and last week they used both items on one of their specialty salads, topped off with a vinaigrette dressing.

“My favorite herb from the garden is basil, and this week we paired it with mozzarella and plum tomatoes for our Caprese salad. As you can see, basil is a very prominent ingredient, which we pick frequently,” Whelan said.

“To make sure the vegetables and herbs get enough water, we have a drip irrigation system in addition to people watering them by hand,” culinary student Troy Yonke said.

Yonke said that Monday is when he picks the most herbs and vegetables, because Tuesday is their prep day for the rest of the week.

Liberal arts student Deshaun Roberts said he didn’t even know there was a garden on campus, but it is great because then students might make lifestyle changes that involve staying away from processed foods. He said he didn’t know that the same tomatoes they put on their salads and hamburgers come from the school garden.

Roberts said that people should be aware of eating vegetables naturally, because that’s how it started out years ago when everyone grew their own produce.

In terms of integrating the concept of quality produce at an urban community college, Roberts said  using tomatoes from the garden contributes to the authenticity of the food.

He said that they should branch out and make it bigger, so it is open to the public. Roberts said they should grow potatoes in the largest quantity because he eats a lot of French fries.

Other students thought it would be great if the culinary garden could grow vegetables like corn, spinach, cabbage, sweet potatoes, cucumbers, lettuce, kale, and green beans.

“I’m from San Rafael and there are gorgeous areas there to grow your own vegetables, and now we have that appreciation for freshness in an urban area. It’s a growing trend,” Roberts said.

A bunch of weeds have been pulled out and the culinary department has made more space for more crops, so it isn’t a far-fetched idea to start growing new produce.

Chef Elisabeth Schwarz said that it is important to appreciate the luxury of having a garden here on campus, because people don’t always realize that even the roses from the garden are used in dishes for garnish and decoration.

“Roses are a plentiful item that grow in our garden that we are lucky to produce and have access to,” Schwarz said.