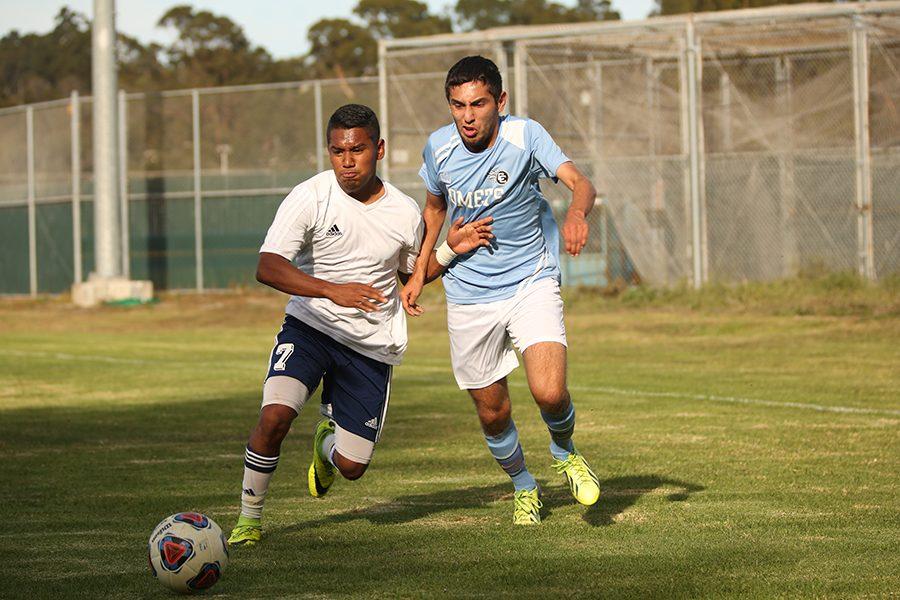 Comet's forward Francisco Fernandez and 49er's defender Isaac Rodriguez battle for possesion of the ball during CCC's 3-0 win against Yuba College at the Soccer Field on Oct. 7.

“We scored toward the end of the first half against Marin, which was great going into the halftime break,” Comet coach Nikki Ferguson said. “But Marin did not let up until we scored the second goal which, I think, was the most important one.”

With about 15 minutes left in the second half, Comet forward George Burrows received a diagonal pass toward the left flank, cut in and took the defender, then shot a sensational laser from 30 yards out.

“After we put the game away with that second goal, Marin’s confidence went down while ours went up,” Comet defender Eduardo Torres said. “We knew we could put another one in the net and we did.”

Ferguson said, “The Marin goalkeeper did not see that ball coming. George (Burrows) snuck a wonderful goal past their goalie.”

“After that goal, Marin’s play became deflated and they kind of just rolled over at that point,” Comet goalkeeper Eduardo Escamilla said.

Ferguson said, “I don’t think Marin is inferior to anybody in this conference. But I think we are the best team in conference because of the results we have been able to get.”

CCC maintained about 70 percent of  the possessions throughout the game (against Marin) and had most of the scoring opportunities.

“This was the first time in a long time that we did not get a goal from an own goal, set piece or from the penalty spot,” Escamilla said.

Ferguson said, “We should have scored more goals in that game against Marin. Finishing has been a constant problem all year but I’m happy that all the goals we scored were built up from the back.”

“To be honest, since they (Marin) were in first place we thought we were going to get some decent competition. But they were not all that good. Mendocino College was a much better team,” Comet defender Edgar Yepes said.

The game against Napa, however, was a much closer encounter compared to the Marin game where CCC was the superior team.

“Against Napa, we never gave up, we fought for every 50/50 ball and even after they tied the game we kept on fighting and pushing forward. Thankfully, we got the winning goal before the game ended,” Torres said.

The Comets did strike first blood in that game when CCC midfielder Juvenal Pena received a well-placed ball from Burrows and placed the ball in the back of the net with a few minutes left in the first half.

“At the beginning of the game we played very sloppily,” Yepes said. “Some of that was due to the rainy conditions and the muddy field, but fortunately we got a goal before the halftime break,”

“We were in a tug of war with Napa throughout the whole game,” Escamilla said.

Napa tied the game 1-1 midway through the second half.

The Comets responded after Napa’s equalizing goal. With five minutes left in the game Comet midfielder Anthony Maytum saved a bad cross from going out of the end line, redirected it back into the box, where Torres put the headed ball in the back of the net.

Yepes said, “After that goal we played with more confidence and swagger even though we didn’t know how much time was left in the game. I thought that was huge.”

After five BVC games, signifying the halfway mark in conference play, the Comets have recovered to win three games in a row.

Before that streak, they were on a seven-game winless streak that put the team’s post-season hopes into question after a promising start to the season.

The Comets are looking to repeat as BVC champions for the first time ever.