Struggles continue for improving team after home loss to Solano 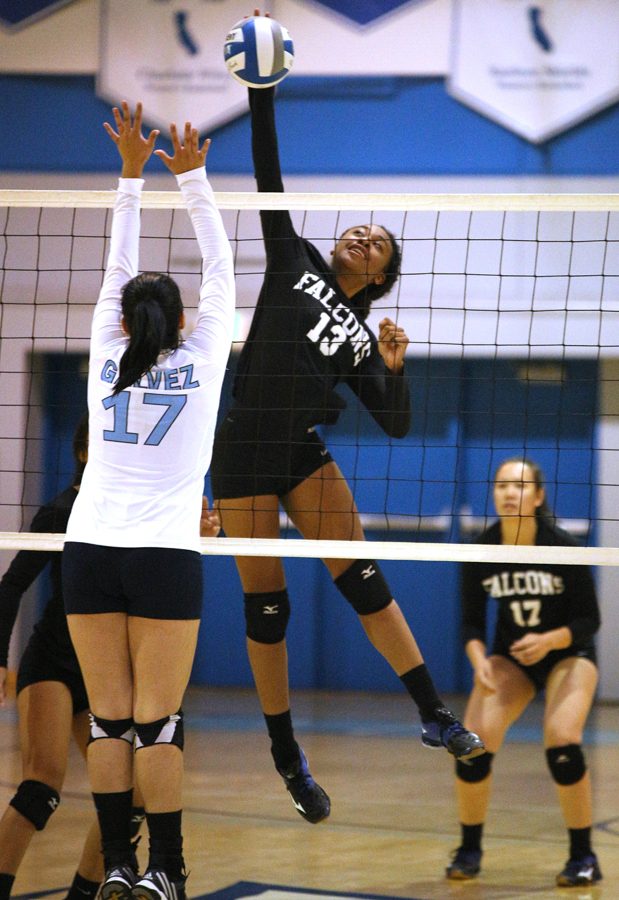 Despite forcing long volleys and exposing many Falcons’ defensive lapses, the Contra Costa College volleyball team lost too many battles at the net to build an effective scoring attack and succumbed to visiting Solano Community College Friday in the Gymnasium.

The Comets (2-11 overall, 1-5 in the Bay Valley Conference) lost their second consecutive game at home in straight sets 25-7, 25-11 and 25-7 to Bay Valley Conference co-leader Solano, which took advantage of its overwhelming height and effective hitting, anchored by 6-foot-2-inch freshman middle hitter Alana Sibblies, to win the match.

CCC will get the chance to defend its home court again tonight at 6 p.m. against Mendocino College in the Gymnasium.

The Falcons struck first, jumping out to a 2-0 lead in the first set. CCC fought through a barrage of Solano kill shots but found themselves trailing 7-2 after failing to manufacture points out of its high-energy opening.

Despite fending off the Falcons’ initial scoring efforts, Solano was able to string together points in droves after wearing down CCC defensively.

The Achilles’ heel for the Comets this season has been their tendency to start slowly. Against the Falcons, the effort was there early on, but CCC could not get back into scoring position after working doubly hard to defend against the Falcons’ heavy hitters.

In the second set, the efforts of middle blocker Deanna Craighead and right setter Joshleen Ayson helped the Comets win some points. Despite dropping the set 25-11, CCC put together its most productive moments of the evening.

After gaining a second wind, Comet players were able to get lower on defense, making it easier to recover and get back in position to score.

Even with consistent scoring, battling against the Falcons’ firepower proved to be too much for CCC to overcome.

Craighead missed multiple games for the Comets after injuries from a car accident sidelined her in the preseason.

“It feels good getting back into the groove after missing so many games,” Craighead said.

As the Comets’ tallest player and one of CCC’s two women over 5-feet-7-inches tall, Craighead’s defensive rotations have been adjusted by Tianero, giving the Comet more defensive middle responsibilities.

Craighead said, “I’ve played middle before so it wasn’t hard to adjust. It’s just remembering where I’m supposed to be.”

Tianero first employed the new strategy in CCC’s 3-1 loss against Yuba College earlier this month. In that game, the scheme came together resulting in a second set win. The set was the first a Tianero-coached Comet team has taken from Yuba in her tenure at CCC, as coach or assistant.

“I shifted our defensive formation so our outside hitters have more of an angular approach to the net,” Tianero said. “Now the players can take advantage of their quickness and be in better position to cover for each other on shots not directly in front of the net.”

Another positive point for the Comets against Solano was the third set play of freshman outside hitter Justine Ayson, Joshleen’s sister.

She was able to put together a number of scoring opportunities for CCC with her serve, while her tenacity and defensive effort continues to improve.

“I’m getting more experience and I’m confident that I can play and continue to improve at this level,” Ayson said. “Our biggest problem tonight was our service receiving. We weren’t getting low enough when the so when the ball was hit to us, a lot of the time we were reacting instead of moving our feet. It’s something we will continue to work on.”

As the match began to get out of hand, CCC players started to make mental mistakes that were opposed to the energy and effort they used to open the BVC contest.

The Falcons continued their scorched earth campaign from the middle of the second set through their dominating effort in the third, sweeping the sets and winning the game.