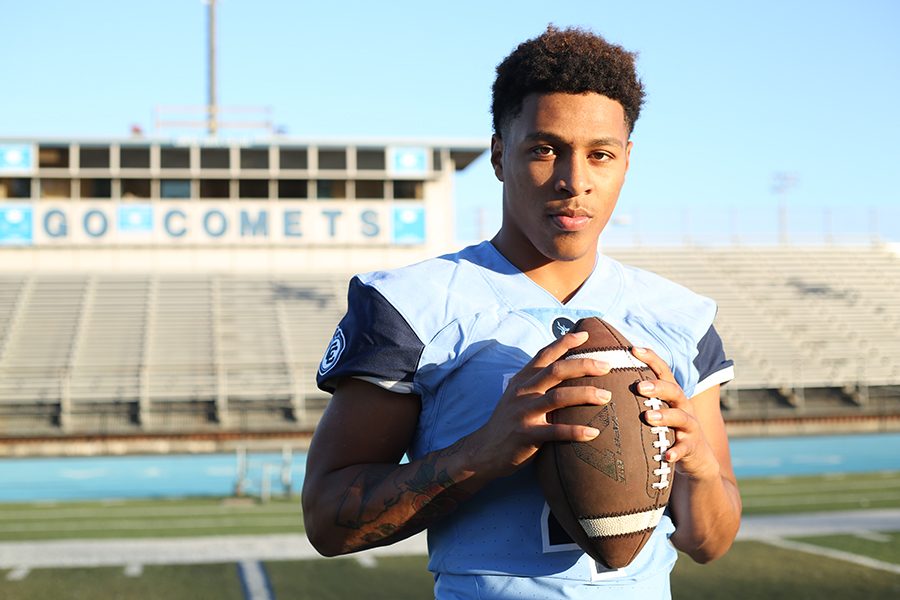 Some people don’t get to choose their destiny; it is a decision that is made for them by a coach or parent. But the thing about destiny is, when it’s the right path you can feel it.

Comet strong safety Rodney Washington was born to play football. His 6-foot-2-inch height and 205-pound frame is tailor made for separating unsuspecting receivers from the ball.

“When I was a kid I was a basketball fanatic,” Washington said. “My dad made me play football when I was 6 years old. We are kind of like a football family, but after I started playing it I started to love it.”

Washington was born in June 1997, to Regina and Rodney Sr. in Oakland California, but honed his skills while playing youth football for the Richmond Steelers.

“I’ve known Rodney for 10 years, since we played for the Steelers, and he’s still the same, just a little shorter back then. But he was always a playmaker,” Comet receiver Tyrone Morgan said.

Younger than his two siblings, Reyna and Ryan, Washington graduated from El Cerrito High School in 2015, but not before transferring several times to find the right place to thrive.

“I started high school at Hercules (High), but left because their football program was all but nonexistent,” Washington said.

“From there I transferred to Bishop O’Dowd in Oakland. That school made me a better person and helped me to grow.”

“Going to school there was definitely a college prep experience,” Washington said.

As the Washington family sought the perfect situation for its youngest son, Washington the player was making a name for himself before finally landing at El Cerrito High School in 2014.

“Rodney was one of the top players in the area despite not playing in his junior year because of transfer restrictions,” Contra Costa College coach Alonzo Carter said. “He played in some all-star games but I really got a good look at him when I worked the Cal football camp in 2014.”

At the Cal camp, Washington played both offense and defense.

“I thought the kid was talented and could play anywhere on the field,” Carter said. Washington garnered attention from Cal, and  other Pac 12 and Big 12 colleges.

Before long, those opportunities first presented as open doors, began to slam shut.

“It was the worst moment in my life, up to that point, the moment I found out that I didn’t have the grades to make it to the NCAA right out of high school,” Washington said.

Needing support from the people he valued most, his family, Washington remembers his grandfather motivating him to push forward and encouraging him to be a man in the face of any adversity.

Those words were fuel for the safety. In his first year of playing football for the Comets,  Washington helped lead CCC to a 9-2 record while earning First Team All-Pac 7 Conference honors for his defensive play.

“He has all of the tools. He’s a playmaker. He just has to get into the weight room a little bit more,” Comet defensive coordinator Pat Henderson said. “As long as he’s pointed in the right direction mentally, he’ll have an opportunity to play on the next level.”

With his football life beginning to take form, it came as a shock when Washington learned that his grandfather, one of the men who meant so much to his development, died shortly after the 2016 football season began.

“It really changed a lot for me, my whole mindset shifted,” Washington said.

“This second year of JC is the end for so many people. I want to get out and make sure I provide for my family. I feel that if I don’t live up to the expectations that (my grandfather) had for me, then all of this work has been a waste.”