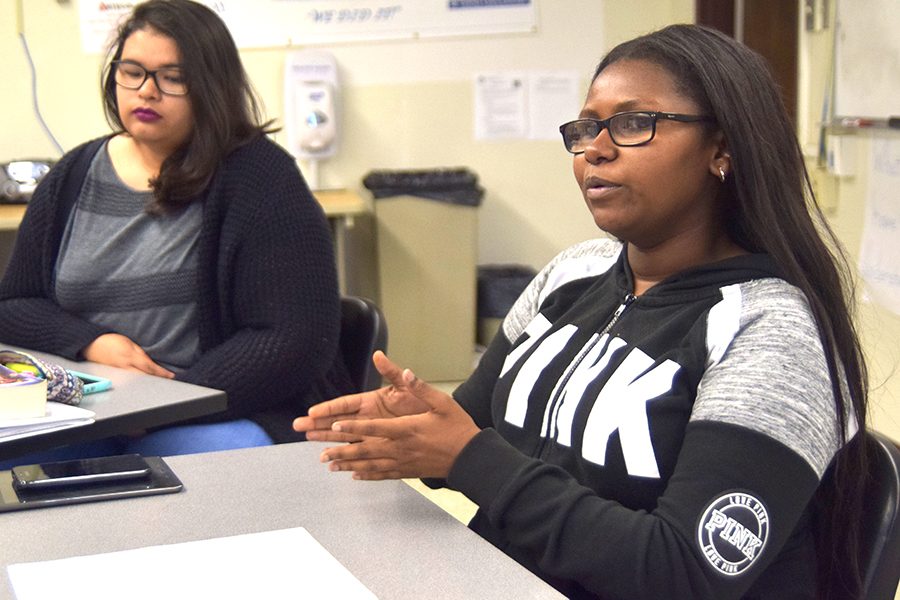 Film major Courtney Chappell (right) speaks to English major Mickayla Burgos and the rest of the Student In Action club members in AA-219 on Oct. 12.

A young group of Gateway to College High School students are coming together to help and give back to their community.

The Students in Action club began in September 2015 by two students who wanted to make a change.

Currently, the SIA club has around 10-15 students who participate and want to help give back to the community.

Gateway to College High School Resource Specialist Anna Chuon said, “They did a lot of things last year, so with a new president, I really think they’ll go above and beyond even more than they did last year.”

Since the club started, it has helped people recover from the temblor in Nepal though food drives on campus and $120 donation of their own money to cancer research.

“We’re really committed. Why not go all in or all out? Even if it is something simple,” film major and president of SIA Courtney Chappell said.

The SIA club has also mentored young students from the ages of 5-11 years old at Bayview Elementary.

The group is comprised of all Gateway to College High School students and one graduate.

They often host events on school campus to raise money for charity. The Gateway office is located on the second floor of the Applied Arts Building.

Their most recent event was the video game night. SIA hosted the event in the student lounge below the Student and Administration Building.

“We promoted the event a little last minute, so it could’ve been better,” Chappell said.

SIA managed to raise $70.06 from their game night. Some club members also mentioned that the Middle College High School students on campus also host a game night once a week for their students for free.

Chappell said that the club needs to promote itself in the community and on campus more. She said the club only promotes events in Gateway to College High School classes and by a few posters on bulletin boards on campus.

“We need to promote these events more so we can bring in more people and raise more money,”
she said. “It’s hard because we can’t just walk into different college classes just to promote our event any time we want.”

The SIA club hosted a spirit week for students starting Oct. 24 and ending on the Friday.

Students who participated in games at spirit week were able to accumulate points to win an ultimate prize.

“We have to be 100 percent committed to this. We can’t slack off,” Chappell said.