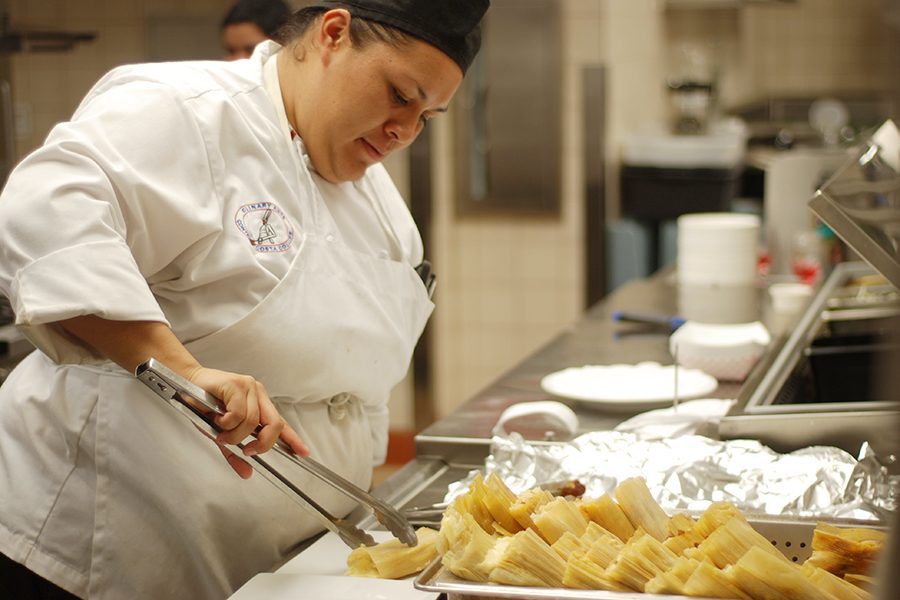 In celebration of Día de los Muertos (Day of the Dead), the culinary arts department organized an event in Aqua Terra Grill on Nov. 1 that helped raise funds for scholarships.

The celebration was scheduled from 5 to 8 p.m., but by 7 p.m. there were no more tamales, pozole or any more of the fan favorite mole.

A culinary student’s mother Maria Vivas, said she always comes out to support all the culinary events.

Vivas said she celebrates Día de los Muertos to honor people who have passed away.

The culinary staff also decorated a personalized altar in recognition of the holiday.

Culinary arts student Linda Montaña said Día de los Muertos is a day to celebrate and remember our family members who past away. Montaña put her father and brother’s picture on the altar.

As part of Mexican traditions altars are decorated with the favorite food of the dead, marigold flowers, candy skulls and other offerings.

Culinary arts department Chairperson Nader Sharkes said, “They put the favorite food of people who passed away on the altar because the spirits come.”

Sharkes said the department celebrates every culture represented on campus to bring the college family closer together.

He said 45 percent of the culinary arts students are Latino, so the department should celebrate this “fantastic” holiday.

Culinary program server Meliza Torres said that most of the people asked for the Mole, which is from Michoacan, Mexico.

College community members were fascinated with the variety of food that was presented at the Dia de los Muertos celebration.

One of the attendees, Genda Flores, brought her kids to see the college’s interpretation of a Dia de los Muertos celebration and to experience the food.

“The mole and pozole rojo was delicious. There were no more chicken tamales by the time we got there, but my kids liked the cheese tamales,” Flores said.