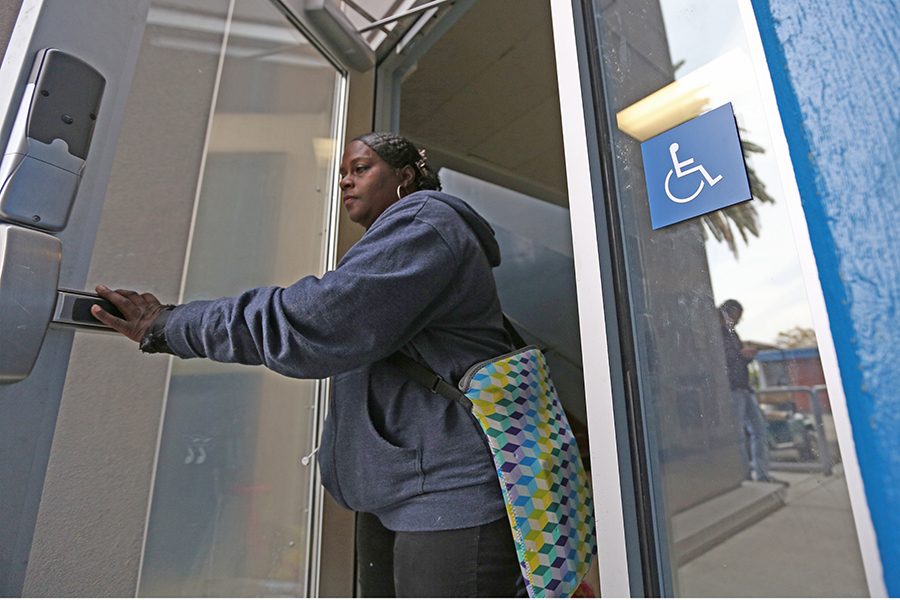 Automatic doors are scheduled to be installed in the Applied Arts, Gym Annex and Art buildings and the Computer Technology Center over the winter semester break, Buildings and Grounds Manager Bruce King said.

These motion-activated doors will bring the college into better compliance with the Americans with Disabilities Act and ease movement around campus.

For the AA and Art buildings, and the CTC, this will replace the current setup that uses hand and kick plates to trigger the doors to open.

Though less convenient than motion-activated doors, these are the preferred entrances for most students already.

King said these button-triggered doors are “very labor intensive,” requiring frequent maintenance, both to replace batteries and because of the harsh use they receive. “We’ve got some soccer players on campus,” he said.

Some of the damage and wear to the kick plates is due to excessive use by students.

King said, “Any building that has (automatic doors), those are the ones people use. It’s a neat feature, not just for disabled people, but for everyone.”

King said the Gym Annex’s exterior door next to the elevator is already ADA compliant even though it has no powered opening mechanism. The door requires less than five pounds of force to open and has an ergonomic handle that meets ADA requirements.

King said he felt sorry for anyone who had to operate the door in a wheelchair.

The scheduled improvements seek to raise the college above these bare minimum requirements.

Just one door on each building will be automated.

The upstairs door in the AA Building won’t be automated because the path leading to it isn’t level enough to qualify as an ADA pathway.

King said, “We were going to put in two or three more (doors), but due to Measure E it didn’t make sense to put them in, then rip them out three years later.”

Business Services Director Mariles Magalong said, “As funds become available and as buildings are placed on a renovation list, or a demolition list, that changes what you want to do with them.”

Pyle said, “It’s a relatively minor project, but it’s important to make sure our doors are in ADA compliance.”

In October, Pyle said the ADA door project would go out to bid that month, with construction to begin two months later. But King said Monday it still hasn’t gone out for bid.

King said after the project is put to bid it takes a couple weeks for bidders to visit the site. Then, once a bidder is awarded the contract and approved by the district’s purchasing department, parts must be ordered and work scheduled.

“Everything slows down around the holidays. Three weeks can become four to five weeks,” King said.

Even in October, Magalong said, “This project has taken a long time to get started.”

The Master Project List says the due date for the project is Jan. 15, 2017, about a week before spring classes begin.

The last update, on Nov. 3, indicates there has been no change, and the Master Project List has a note saying, “(We are) still planning to perform this work during the winter break.”