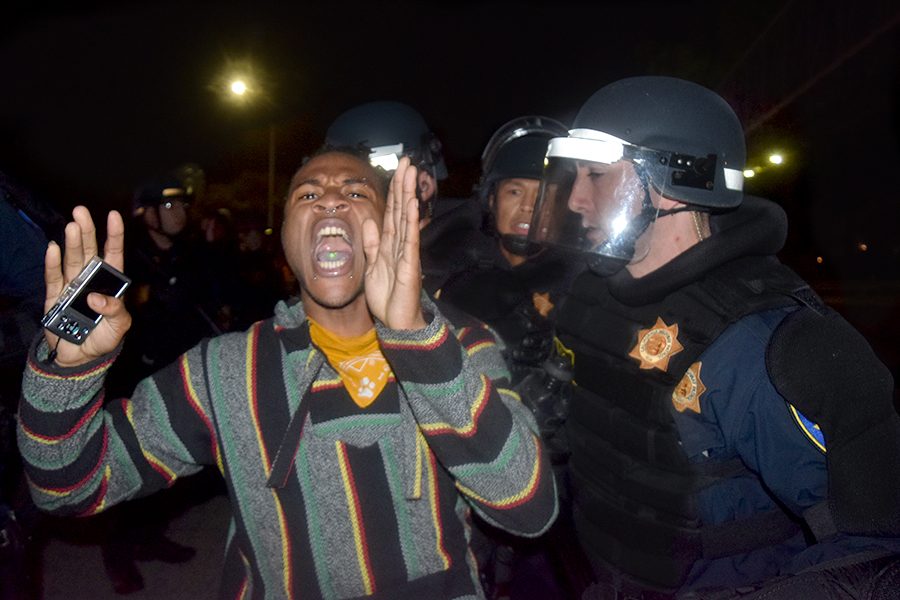 As he is arrested by Oakland Police, a man yells to the crowd of fellow protesters blocking the I-580 freeway during the protest against the election of Donald Trump as president in downtown Oakland, California on Nov. 10, 2016.

By Cody Casares and Denis Perez

President-elect Donald Trump’s victory on Tuesday erupted protests in major cities throughout the United States. People throughout the Bay Area assembled to speak out against his divisive rhetoric of women, people with disabilities, immigrants and LGBTQ communities.

There have been protests in Oakland, Richmond, San Pablo, Berkeley and San Francisco, California every day since Trump’s victory speech in New York four days ago.

Despite his plea for national unity, students at high schools throughout West Contra Costa Unified School District, Contra Costa College, UC Berkeley and other universities and community colleges throughout California walked off campus to join nationwide protests against his contradictory comments and presidency.

These student organized protests were not declared unlawful.

On day two, people dresssed in black hoodies and masks destroyed property, lit garbage fires in the streets and tossed fireworks and bottles toward lines of police from within the crowd of protesters.

On day three the protest was determined to be unlwaful around 9 p.m. when protesters stormed Interstate 580 near the Walgreens on Telegraph and 34th Street.