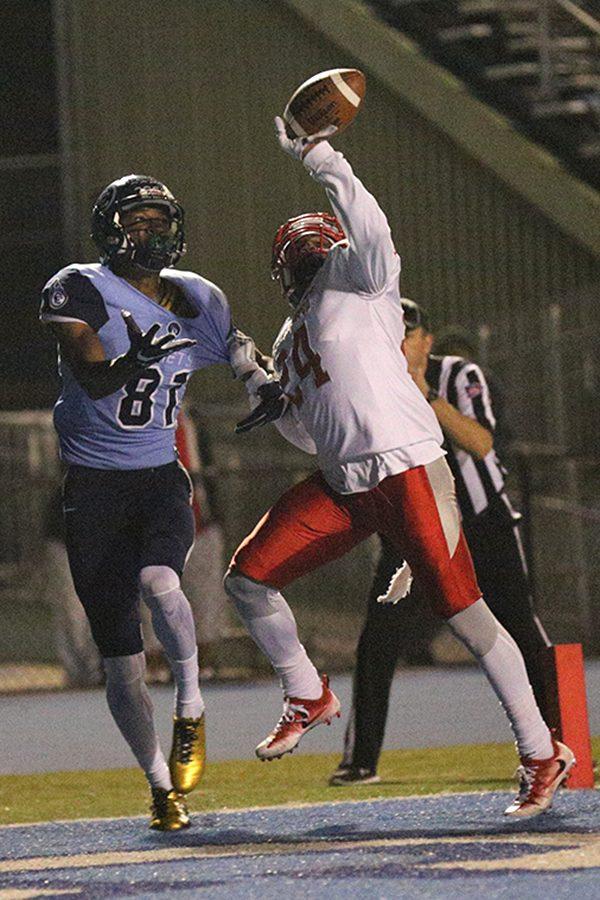 Ram defensive back Deante Fortenberry (24) tips a pass in the end zone away from Comet receiver Marquis Pippins (81) during CCC’s 19-14 loss to City College of San Francisco at Comet Stadium on Saturday.

The football team missed an opportunity to finish with a share of second place in the Bay 6 Conference after giving up a game-winning touchdown in the closing minutes of Saturday’s 19-14 loss to City College of San Francisco at Comet Stadium.

Despite sophomore Harris Ross’ heroic 22-carry, 181-yard rushing effort, which set the pace for the Comet offense, the game was ultimately decided by the Rams’ defense which held CCC (3-7 overall, 2-3 in the Bay 6) out of the end zone with just two minutes to play in the game.

“It was the last game and we were playing for bowl eligibility,” Ross said. “Also, my grandfather is sick, so I really wanted to play hard for him.”

The contest, a match-up of two Northern California powerhouses, was dominated by big plays and bone jarring hits.

Defensive backs Rodney (10 tackles) and Lavon Washington (six tackles) both found their way into the CCSF backfield to tally tackles for losses early in the game to help keep the Rams’ offense from finding a comfortable groove.

The first quarter for both teams was marred both by punts and inopportune penalties. CCC had a chance to get on the board first, but that opportunity was lost as the 407 fans in attendance watched the 30-yard kick sail wide left.

The scoring stalemate was snapped when, on CCSF’s next possession, the Rams traveled 74 yards in 15 plays to the Comet 5-yard line.

CCSF held a 3-0 at the end of the first quarter.

In front of family in the bleachers and with second place on the line, CCC quarterback Cameron Burston took it upon himself to get the offense into gear. On the Comets’ first offensive possession of the second quarter, Burston rushed for 19 of his team’s 11-play, 76-yard drive that ended with a 7-yard rushing touchdown for the quarterback.

The ball was recovered by CCSF running back Lorenzo Longwood and carried 30 yards to the Comet 40-yard line.

“Every team that beat us this year celebrated the win because they knew that we were no joke,” Comet coach Alonzo Carter said. “I’m not mad, but I am human so I’m disappointed,”

The Rams would settle for a field goal giving CCC a 7-6 lead and CCSF the final handful of points before halftime.

The Rams took the lead in the third quarter after being gifted a 14-yard shank by receiver turned punter Marquis Pippins. The Rams capitalized on the good field position by notching their first touchdown of the day.

The six-play, 58-yard scoring drive ended with an 18-yard touchdown pass. The catch gave CCSF its first lead of the evening.

With its first drive in the third quarter ending with a shanked punt and nothing else positive to build on, the trailing Comets leaned on Ross and Burston to jump start the lethargic CCC offense.

On its second and final drive of the third quarter, both sophomores made huge plays to get the Comets into scoring position.

Despite building a reputation as a quarterback that finds comfort in the pocket, finding receivers streaking down and across the field, Burston used the second half to showcase his ability to get outside of the pocket and use his speed to capture much needed first downs.

First, a 26-yard burst by Ross put the Comets across midfield taking the ball from the CCC 42 to the CCSF 32-yard line.

Then Burston got loose on a broken play and scampered for 22 yards for another CCC first down.

Another 13-yard rush for Ross set up Burston’s go-ahead 5-yard touchdown scamper at the end of the third quarter.

After three quarters, CCC was back in front 14-13.

Now leading, the onus was on the Comet defense to hold off the talented CCSF squad.

R. Washington took the task personally. On the ensuing drive, the safety sacked the Ram quarterback for 6-yard loss, forced a fumble on the play and recovered the ball.

With the ball and the lead, a confident Comet offense put together a 19-play drive that ate up 4:30 on the clock. But  it ultimately stalled forcing a CCC punt.

Pippins pinned CCSF to its own goal line forcing the Rams to march 99 yards — the length of the field — in order to score.

The Rams did just that.

CCSF produced an 86-yard, 14-play scoring drive on which they converted a fourth and 13 by rushing 18 yards around the left side.

The touchdown put CCSF ahead 19-14 giving the Rams a 5-point lead and the inspiration to thwart CCC’s final effort toward a comeback.