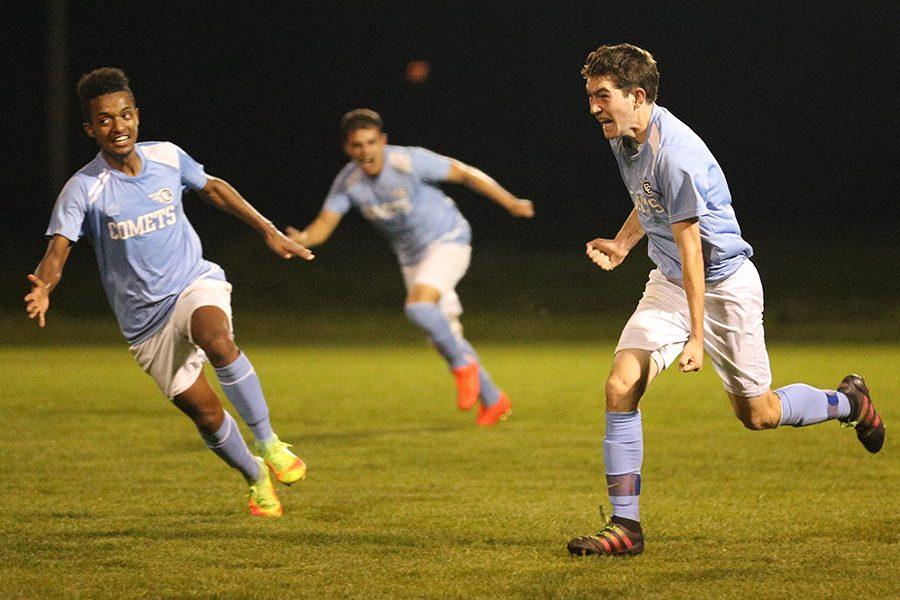 Comet Forward Anthony Maytum (right) runs to midfield to celebrate with his teammates after scoring a goal in stoppage time during CCC’s 1-0 win against Napa Valley College at the Soccer Field on Thursday.

The lone goal scored in the game, during stoppage time, was enough for the Contra Costa College men’s soccer team to defeat Napa Valley College 1-0 to seal its third consecutive playoff berth and win the 2016 Bay Valley Conference Championship at the Soccer Field Thursday.

During a Comet counter attack at minute 92, right-winger Anthony Maytum received Jahierie Gray’s filtered ground pass in full stride along the right center of the field about 40 yards from the goal.

In between two Storm defenders, Maytum’s first touch created enough room for him to burst into open space down the center and create a one-on-one goal scoring chance.

As he neared the edge of the penalty area he slowed down enough to chip a right-footed shot toward the far post before defenders could close space.

The backspin on the ball made it dip just below the goal post, grazing Napa Valley goalkeeper Sebastian Romero’s fingertips as he fell backward fully extended into goal.

“When I saw that I was past the final player I looked up at goal and saw that the goalkeeper was far off his line,” Maytum said. “I took the chance. Once I hit the ball everything went in slow motion. I didn’t think I scored until I saw the ball hit the back of the net, and then I just went crazy — everyone went crazy. It was mental.”

The Comets’ substitutes, coaches and fans roared on the sideline as players surrounded the winning goal scorer at midfield in celebration while some Napa players lay on the grass, exhausted — coping with the fact that their season was over.

The Comets (12-7-2 overall, 8-1-1 in BVC) let off their constant pressure on the Storm’s backline and parked the bus for the final two minutes of stoppage time to close out the scrappy 1-0 win.

“But we are just glad to be in the playoffs. That was our goal at the beginning of the year and we took a lot of knocks and bruises getting here,” Ferguson said.

He said is proud of his mostly freshmen team’s resiliency overcoming a seven-game winless skid. The team has not lost since its 1-1 conference tie at Merritt College on Oct. 4.

“But the team worked past it and now we are just happy to be the diver’s seat going into playoffs regardless of our seed. We just have to make the most of this chance.”

He said the brackets for the first round, and locations, will be announced on cccaasports.org today, and the Comets could be scheduled to play as early as Saturday, or on Nov. 15.

Napa Valley College (7-10-2 overall, 6-2-2 in BVC) men’s soccer coach Les Carroll said his players gave everything they could throughout a fast, hard fought and physical game.

The referees called 18 fouls and showed four yellow cards in total by the end of a direct, and ugly, battle for a playoff spot.

During the first half CCC drew nine fouls. Most resulted in free kicks for the Storm inside the Comet’s defensive half.

Crosses and lobs during counter attacks or set pieces posed a threat, but lacked finishing.

“We could have notched two or three goals in the first half, but (Comet) goalkeeper (Eduardo Escamilla) pulled off a world class save,” Carroll said.

Missed chances by the Storm’s strikers allowed Ferguson to re-evaluate his tactics at halftime.

The Comets center attacking midfielder Abdulahi Mohammed said the difference between halves was possessing through square and back passes in the midfield to keep the opposing team chasing the run of play.

The Storm did not score any of its seven shots throughout the first half, and its defensive backline allowed CCC to fire six shots during the second half.

“(The Comets) played great football in the second half,” Carroll said. “They played really smart — but for us it all came down to fatigue and missing those early chances in the first half.”

At the final whistle, both teams had eight shots. CCC sophomore Escamilla saved six shots in the first half and finished with seven, bringing his season total to 71 saves.

“I thought it was going to be one of those games,” Yepes said. “But I’m glad we stopped playing into their direct and physical style and played our game. It was like playing kickball — plays were bypassing the midfield for most of the game.”