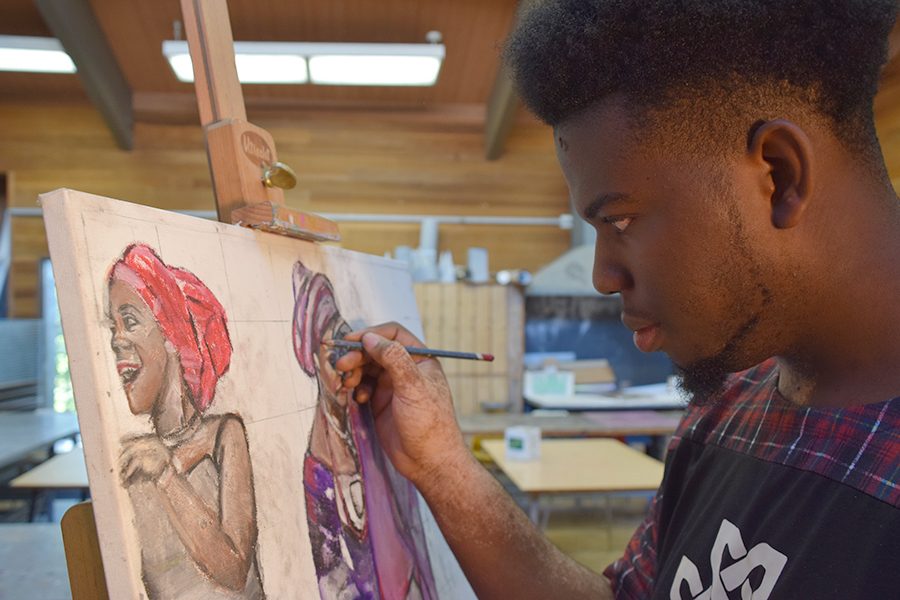 Oghenetaze "Taze" Etibo applies details on an untitled piece of art by shading it on Monday.

It is through the artist who paints work representative of universal emotions where art can have a profound impact on the lives of those who admire it.

This drive to impact lives is the main purpose of art major Oghenetaze “Taze” Etibo, 21, who is working on changing the world through his craft of painting.

“The other day I read about this girl who has suicidal thoughts because of the pain she’s feeling from cancer,” Etibo said, “I’m always thinking, ‘what can I do to stop that from happening?’”

Etibo uses pastels to create works of art that feature adversities faced by children and women with scars, disabilities and birthmarks.

Some of his pieces include a double amputee child wrestling with another child, a model with vitiligo and depictions of musicians Michael Jackson and Tupac.

“I don’t just paint to sell them. I paint to help people who are going through stuff,” Etibo said.

The underlying message of embracing one’s body and embracing what makes someone feel different runs through his entire collection.

“When I’m riding on the bus, I see people happy and sad. It gives me inspiration,” he said, “When I draw, I pick out this sad emotion so people can relate, like, ‘he knows what I’m going through’.”

Etibo was born in Port-Harcourt, Nigeria on July 15, 1995. He enjoyed life as a child growing up with a lot of friends and family. Creativity runs deep through his blood.

Etibo’s aunt is a singer, his uncle is an artist and his brother is a dancer. After his father passed away in 2003, Etibo and his mother and his three siblings moved to Richmond, California in 2008.

“I felt alone and different, but after a while people accepted me and when I learned English it was easier to fit in,” Etibo said.

It was at Portola Middle School in El Cerrito where Etibo’s seventh grade art teacher sparked his interest in a variety of artistic methods, such as stained glass, portraits and collages.

“Mrs. Marr made me see art as a therapy,” Etibo said. Etibo said Mrs. Marr acted as a second mother by introducing him to friends and helping him adapt to life in the United States.

Etibo has a birthmark that cascades from his neck down to his arms and onto his hand. Etibo said he often found himself a target for bullying.

“I was bullied a lot when I was little,” Etibo said, “People called me burned and when I tried talking to them they would look at me some type of way because they thought it was a contagious disease.”

Etibo said he feels insecure about his birthmark, but he views it as like a signature.

“It’s made me the person I am today,” Etibo said.

Etibo found solace in his artwork creating pieces that really speak to those who are going through hard times or feel different.

“When I got older I thought about this, ‘Did I just come to this earth to work? Or to help people through my art?’” Etibo said.

Most of Etibo’s pieces feature children because of their innocent nature and minimal experience in life.

He also features women, due to their delicate and soft feminine bodies. One of his signatures is to place his birthmark on the subjects in his paintings.

“I incorporate my birthmark so people do not feel different about their skin, their skin color, or looking a certain way,” said Etibo.

One of his paintings is of two children, a boy and girl, squatting and playing with something close to the ground.

The little girl, whose arm and face are covered with a birthmark, has a worried look on her face as she stares off into the distance. The boy holds her hand.

“In this one, the boy is comforting her telling her she’s not alone and not different from other kids,” Etibo said.

Etibo began taking his talent and eagerness to help people seriously when he started taking classes at Contra Costa College in the summer of 2014.

Neko Flores, digital art illustration major, said he has known Etibo for over a year and is continually impressed by his passion and talent for creating meaningful art.

“He adds his birthmark, which goes that extra step further, to make it his own,” Flores said, “I feel like it has opened my eyes to my surroundings, because I didn’t realize about these issues of the body before.”

Flores said he was captivated by all of Etibo’s art.

“When you look at one of his paintings you get lost in the details and the message that he created, and when you come back there is self-realization,” he said.

His art debut in December 2015 was in a display case in the Library and Learning Resource Center and featured a collection of eight women’s faces in black and white and the face of cinema’s legendary serial killer Chucky.

“I felt proud to have my art hanging for people to see,” Etibo said, “I get messages from people thanking me for my art, and that’s important to me.”

Mike Chavez, an undecided major, said he can’t help but stop when walking by one of Etibo’s paintings.

Chavez said he specifically enjoyed a natural-colored painting with blues and greens of a girl with flowers surrounding her.

Chavez said, “He (Etibo) creates the thought through someone’s eyes and he captures a real feeling in all of his paintings.”

Etibo is preparing for his first gallery showcase in the Eddie Rhodes Gallery sometime in the spring 2017.

“I am working on new pieces but the only problem that’s holding me back is frames being so expensive. But I won’t let that stop me from my goal,” Etibo said.

Etibo said he plans on continuing to paint and draw while taking classes at CCC until he can find what he wants to do with his talents.

“I want to be known for helping people with depression through art. You know, how Superman saves people? I feel like I’m here to save people.”