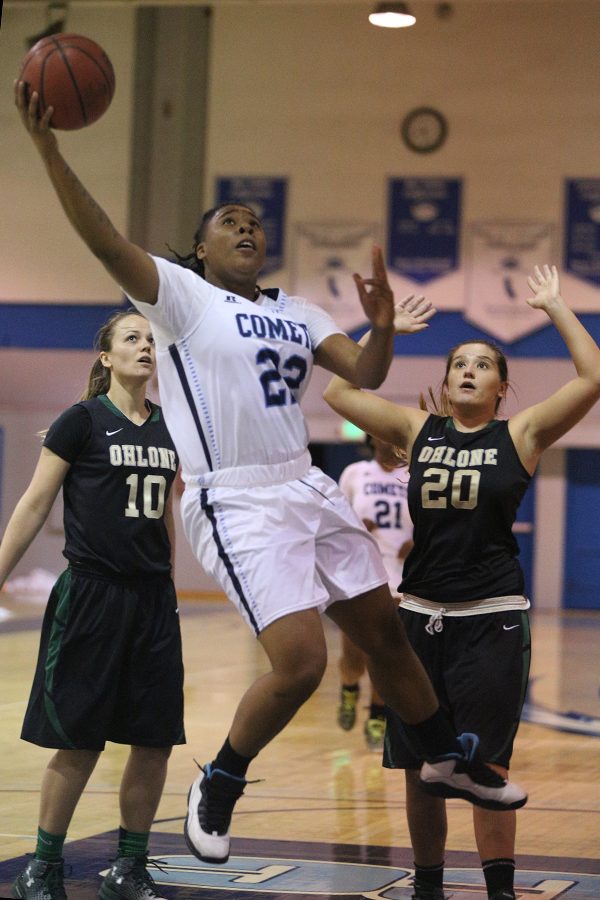 Comet guard Julian Robinson jumps up for a layup during the 23rd annual women's basketball Comet Classic tournament in the Gymnasium on Friday.

The women’s basketball team (3-5) finished the 23rd Annual Comet Classic in fourth place with one win and two losses.

Contra Costa College coach Vince Shaw said, “I’m satisfied with the way my team played this weekend. Their effort was amazing. They showed good glimpses of teamwork and just played good basketball by moving the ball around.”

On Thursday night they had a bye and did not play. Friday night, the team played against Ohlone College and beat them in a blowout 79-33.

“We played good in our first home game. We worked hard and played well as a team,” guard Dierra Mize said.

The Comets played very well throughout the entirety of that game. The team will return to the court against Foothill College on Saturday at noon in Los Altos Hills.

Mize drove through the lane effectively and made a few jumpers that gave her a double-digit total in points in a game where she gave a great effort.

“Our team was much better defensively than theirs (Ohlone),” CCC forward Julian Robinson said. “We were just more dominant in that aspect of the game and that really made the difference.”

The game against Fresno City College on Saturday was a much different story as the Comets lost 88-63.

In this game, Comet forwards Maleya Gaines and Robinson got into foul trouble early in the first quarter. They were forced to ride out the rest of the first half on the bench and that allowed the Rams to dominate the paint on both ends of the court.

There were Comet players whose effort stood out in this tournament. On the offensive end were Mize and Gaines, on the defensive side were guards Lexuis Meriwether and Kayla Orozco.

“We need to tighten things up on defensive end of the court and improve our team communication. That’s what these tournaments are for,” Shaw said.

The Comets did go on a big run right after the half but it was not enough to stop the Rams effective offense.

“We committed to many self-inflicted wounds that really hurt us,” Shaw said. “Our maturity level has to be higher. That’s the only way we will be able to handle adversity.”

In the fourth place game against Laney College on Sunday, things were much more competitive and close until the final buzzer.

The Comets came up short, losing 65-64, but it did not come without controversy.

In the closing moments of the game the Comets committed a foul and Laney failed to convert the free throws. After the second missed free throw, a Laney player rebounded the ball and the referee blew the whistle before the put back was made.

Players, coaches and fans were confused about the call. After much deliberation between the referees, the call was an inadvertent whistle which made the bucket count to give Laney the lead.

Immediately after the call the Comets used a timeout to advance the ball to half court. Mize inbounded the ball to Comet guard Azanae Lewis who drove the ball to the rim, took a running shot that bounced off the rim and then was rebounded by Mize who air balled the game-winning shot at the buzzer.

“What was going through my head during that play was community college basketball. This is the kind of refereeing you see at this level,” Shaw said.